Microcosm Update: Reviews and an Impending Outbreak in Jersey 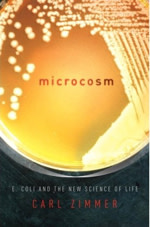 I'm happy to relay some new information about my book Microcosm: E. coli and the New Science of Life 1. Jersey! I'll be returning to the Garden State where I spent my formative years, to speak next Wednesday at the Center for Science Writings at Stevens Institute of Technology in Hoboken NJ. For you New Yorkers, that's a quick PATH ride under the Hudson. The Center's director, John Horgan, blogged the other day about the talk, having just read Microcosm. He even admits that the book made him question his long-held belief that science's best days are over. I'll be speaking at 4 pm at the Babbio Center. (Here's a campus map.) Some of the past CSW talks, from folks like Steven Pinker, Gary Taubes, and Chris Mooney have been posted online, so I'll let you know if mine ends up there as well. 2. Reviews. A couple more just came out. Nick Anthis, who writes The Scientific Activist, has a positive review that's particularly interesting given that every day he is up to his elbows in the subject of my book: E. coli. And the Washington Post has a short but sweet write-up:

Homo sapiens likes to believe it is the most advanced species on the planet, certainly way ahead of anything as primitive as E. coli -- the usually harmless, microscopic bacteria that live in our guts.

But as Carl Zimmer, a science writer for the New York Times, explains in Microcosm, humans have more in common with the bacteria than they realize. E. coli are social. They have sex. Some are even lactose intolerant.

In getting to know E. coli, scientists have come to understand the building blocks and mechanisms that underpin all life. E. coli helped them figure out what genes are made of and how genes are turned on and off, among other watershed findings. Zimmer moves from discovery to discovery, marking each scientist's contribution to the larger body of knowledge, but he doesn't dwell too long on individuals. The star of the book is the bacterium.

In recent years, biotech engineers have manipulated its genes to create life-sustaining drugs. "Through E. coli we can see the history of life," Zimmer writes, "and we can see its future as well."