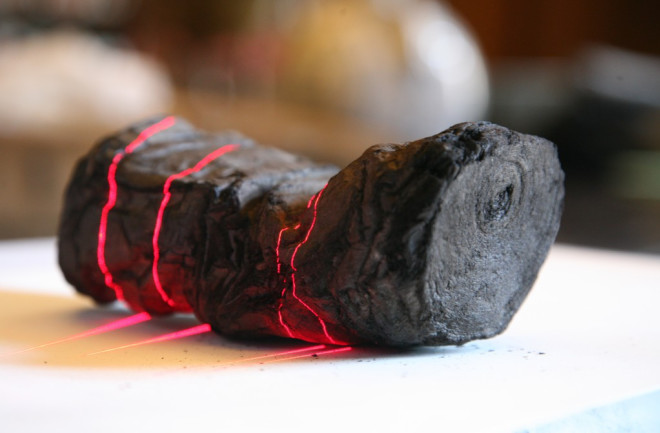 An ancient, charred scroll being scanned. (Credit: University of Kentucky) When Mount Vesuvius exploded in 79 A.D., it buried the surrounding country, including the towns of Pompeii and Herculaneum so quickly and completely that organic matter didn't have time to burn. Instead, it transformed into carbon. While this was bad news for the inhabitants of the region, it was good news for historians: it preserved some of their papyrus scrolls as carbonized tubes — true carbon copies. The only problem with these artifacts is that most cannot be read, as unrolling them would cause them to crumble and disintegrate.

Now, a group of researchers in France has made a key finding that could unlock the secrets of these scrolls for good. Using the European Synchrotron Radiation Facility, researchers bombarded scrolls from a villa in the town of Herculaneum with extremely high-intensity X-rays, in a process called scanning X-ray fluorescence. This caused certain elements in the scrolls to emit photons — to light up, essentially. They published their findings in the Proceedings of the National Academy of Sciences. A separate team of researchers in 2014 used a different X-ray procedure to pick out fragments of writing from inside the scrolls. But the technique used by the team at the European Radiation Synchrotron Facility allowed researchers to see inside individual layers of parchment and read the X-ray-illuminated letters inscribed upon them. By using the synchrotron to examine the scrolls from multiple angles and depths, they believe that all of the writing contained within the tightly rolled sheets could one day be deciphered. That's a big deal, because these scrolls represent the only surviving materials from an ancient Greco-Roman library, and could provide important insights into daily life and historical events.

Not only did the obscured writing become starkly visible, by examining the patterns of photons, the researchers discovered that the ancient scribes used inks infused with metals such as lead, which is an advancement in writing technology not thought to have been discovered until centuries later. The widespread use of metallic inks was believed to have picked up around 420 A.D., over three hundred years after Herculaneum was buried. This new discovery pushes that date back and shifts our perception of ancient writing technology, according to the researchers. They concluded that no outside sources of contamination, such as water from aqueducts or metallic pots, could have been responsible for the lead content, indicating that its presence was a purposeful introduction meant to improve the ink.

A figure from the study showing the difference between visible (a), infrared (b) and X-ray (c) imaging of the scrolls. Notice how much clearer the letters are under the X-rays. (Credit: Brun et. al/PNAS) The Herculaneum scrolls were initially gifted to Napoleon Bonaparte by the King of Naples in the early 1800s, and were subsequently given to the Institute of France in Paris, where they currently reside. Their permanent, delicate state of closure has represented a somewhat ironic challenge to researchers — they possess the artifacts, but lack a means of reading their contents. Over the centuries, various techniques were devised to unroll the scrolls, but they usually ended up destroying the brittle papyrus. The researchers were also able to shed light on another mystery contained by the scrolls. The writing on the unlined sheets of papyrus is unusually straight — so much so that the original authors must have had a means of guiding their hands as they wrote. Previous explanations posited the use of rulers placed next to the paper, but the researchers say they have found a much simpler explanation for the precise spacing. Their X-ray analysis revealed the presence of natural lines in the papyrus sheets formed by tiny crystals of crystobalite, a type of quartz. The spacing of these lines lent itself perfectly to handwriting it seems, making papyrus a truly useful tool.