In my final year of university, with exam deadlines looming and time increasingly fleeting, I considered recording some of my notes and playing them over while I was asleep. The concept of effectively gaining 6 extra hours of revision was appealing, but the idea didn't stick - it took too long to record the information and the noise stopped me from sleeping in the first place. And the whole thing had a vague hint of daftness about it. But a new experiment suggests that the idea actually has some merit, showing that you can indeed strengthen individual memories by reactivating them as you snooze.

Sleep is a boon to newborn memories. Several experiments have shown that sleep can act as a mental cement that consolidates fragile memories into stable ones. But John Rudoy from Northwestern University wanted to see if this process could be taken even further by replaying newly learned information while people slept.

He asked a dozen volunteers to remember the positions of 50 different objects as they appeared on a screen. The items, from kittens to kettles, were all accompanied by a relevant noise, like a meow or a whistle. Shortly after, the recruits all had a short nap. As they slept, Rudoy played them the sounds for 25 of the objects, against a background of white noise. When the volunteers woke up, they had to place each of the 50 objects in the right position, and they were marked on how close they came to the actual target.

The results were very clear - the volunteers positioned the objects around 15% more accurately if they'd heard the relevant sounds while they slept. Although the sleep sounds didn't work for everyone, the majority of the participants - 10 out of 12 - benefited in some way. And none of them knew they heard anything at all while they slept. When they were told this and asked to guess which sounds they heard, they didn't do any better than chance. 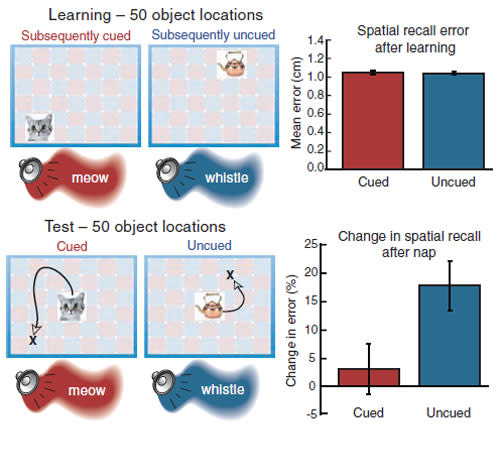 To show that this isn't just a general benefit of revision, whether conscious or not, Rudoy did a similar experiment. This time, his volunteers heard the noises after they had first seen the objects but while they were still awake. This group proved to be no better at remembering the items' locations than those who didn't hear the second round of sounds.

Finally, to understand what was going on in the brains of the slumbering recruits, Rudoy used electroencephalograms (EEG) to measure the electrical activity in the heads of 12 fresh volunteers. He showed that people who were better at remembering the objects' positions after their nap were also those who showed the most brain activity when they heard the sounds Rudoy thinks that hearing the sounds during sleep prompted the brain to rehearse and strengthen associations between the objects and their locations.

Some people think that sleep improves memories in a general way, by making our brains more flexible and easing the incorporation of new information. But these simple experiments show that the benefits can be very specific indeed. It's not only possible to strengthen specific and individual memories by providing the right triggers, but we get the opportunity to do so every single night.