Meet Your New Nightmare: Ancient Spider With A Tail Preserved in Amber 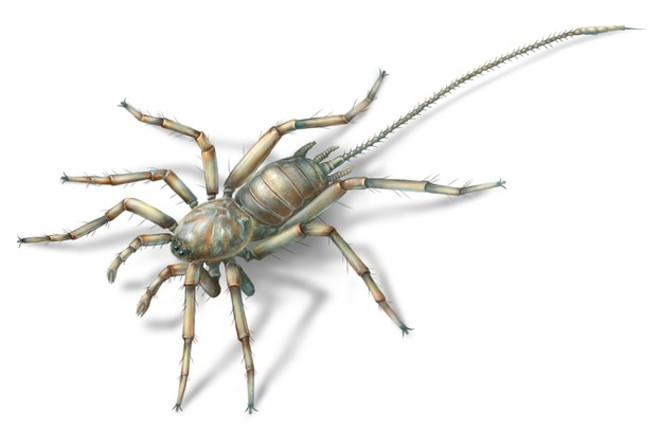 The Cretaceous spider Chimerarachne yingi, found preserved in amber, lived about 100 million years ago and had some unusual features, including a long, whiplike tail. (Credit: University of Kansas/KU News Service)

There's a new kid in town — in Creepycrawly Town, to be exact. But there's much more to this leggy fella than nightmarishly good looks.

A pair of papers out today detail how this 100-million-year-old discovery, preserved in amber, fits into the spider evolution story...and the ways it doesn't. Known from four specimens, the ancient arachnid's formal name is Chimerarachne yingi. Its genus name, from the mythic Greek Chimera, is a nod to its unusual mix of features.

There's that one feature you've probably noticed already that you might not expect to find at all in a spider: a long, segmented, whip-like tail that resembles the telson found in scorpions. All four of the specimens were preserved in amber from what's now Myanmar (formerly Burma). One of the papers describes the holotype, or exemplar, of the species, as well as a second specimen. The other study details two additional individuals.

Fun fact: the combination of primitive and advanced traits in C. yingi is so unusual that the two teams of researchers behind the dueling studies disagree on what the animal is, evolutionarily-speaking.

For starters, in addition to fairly standard spider traits such as fangs and multi-segmented spinnerets that produce silk, there's that tail. No modern spider has a similar feature. C. yingi's tail is actually longer than the rest of the animal: its body is only about 2.5 millimeters, but the tail is about 3mm making it, for you Imperial measurement types, less than a quarter of an inch in total.

Researchers believe that the whip-like tail was probably used to sense its environment, perhaps similar to the way a cat uses its whiskers to gauge the dimensions of openings or even detect movements that stir the air.

Because of the animal's blend of early and later traits, one team of researchers does not consider C. yingi to be a spider. Spider relatives that are nearly three and four times as old as C. yingi also had tails but no spinnerets. C. yingi's mix of traits place it as a late version, say the researchers, within Uraraneida, an order of arachnids that evolved earlier than true spiders and is considered a sister lineage.

If that turns out to be the case, it's still exciting: Uraraneida was thought to have gone extinct near the end of the Permian, about 252 million years ago. Finding these little guys tells us that, if the team's conclusions are correct, the uraraneids survived for at least another 150 million years.

Another view of the holotype of C. yingi as it was preserved in amber for 100 million years...coincidentally the same number of nightmares today's announcement will foster. (Credit: University of Kansas/KU News Service)

Eight Arms to Hold You

But the team describing the holotype of C. yingi places it within the arachnid family tree as an early true spider, citing the presence of both those well developed spinnerets and modified male pedipalps which assist with sperm transfer.

By the way, though it appears the animal was capable of producing silk, there's no evidence to suggest that C. yingi wove webs. Spiders use silk for a variety of reasons, including augmenting their living space and protecting their eggs.

The specimens were not discovered by the researchers in situ in Myanmar, but instead were collected by dealers and sold to Chinese researchers. Many of the other often-spectacular Cretaceous amber finds coming out of Southeast Asia these days (see, for example, the tick preserved clinging to a dinosaur feather or 2016's entire feathered dinosaur tail) have taken a similar route to scientific notice. That's doesn't mean there's anything shady about the specimens, but personally I like to know these background tidbits and I figured you might, too.

Today's formal description of C. yingi appears in Nature Ecology & Evolution, which also published the related paper on the two additional specimens and alternate spot on the arachnid family tree.

One more time: Feast your eyes on this freaky fella in a great illustration that might be mistaken for the worst cake pop ever. (Credit: University of Kansas/KU News Service)
1 free article left
Want More? Get unlimited access for as low as $1.99/month
Subscribe