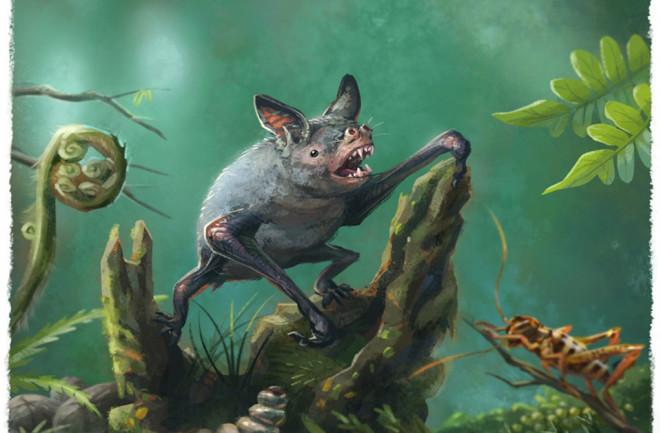 New fossil find Vulcanops hails from New Zealand, home of burrowing bats including the now-extinct Mystacina robusta, shown here in an artist rendering. (Credit Gavin Mouldey) Where might you expect to find fossils of a giant burrowing bat, three times bigger than today's average bat? Why, in St. Bathans, New Zealand, of course. Vulcanops jennyworthyae, which lived more than 15 million years ago, tells a fascinating story of a lost world. No offense to Jenny Worthy, the team member honored in the new fossil bat's species name, but I'm going to call this little beauty by its genus name, Vulcanops, coincidentally the first new bat genus discovered in New Zealand for well over a century. Vulcanops' bones and teeth were found in sediment that is dated to the earlier half of the Miocene Epoch, more specifically, about 16 to 19 million years ago. It was found in Central Otago, a beautiful region of New Zealand's South Island that will look very familiar if you've ever watched any of the Lord of the Rings or Hobbit movies. The specific corner of Otago where this bat once flew and scurried around the ground, was more recently bustling with gold mining activity in the late 19th century. That's when St. Bathans sprung up, including the iconic Vulcan Hotel, after which Vulcanops is named.

Ah, beautiful New Zealand. Here at the edge of the Manuherikia River on the South Island, near the tiny town of St. Bathans, researchers set up sieves to wash away sediment and reveal fossils of Miocene animals including giant burrowing bat Vulcanops. (Credit Vanesa De Pietri)Digging Deep Okay, enough about New Zealand. Let's get batty. Bats, the only flying mammals (sorry, sugar gliders), are fascinating, and burrowing bats are particularly interesting. Today, burrowing bats are found only in New Zealand — though they once winged through Australian skies (and scuttled along the ground there as well). While many bats have evolved to be rather particular in their diet — only fruit, for example, or just insects — the burrowing bats are omnivores. Based on the teeth of Vulcanops, it looks like this particular bat evolved to eat both plant matter and potentially small vertebrates, which modern burrowing bats do not do. You know who does, however? Some South American bats, and here's where things get especially exciting in a tectonic shift kind of way. Vulcanops and other burrowing bats, despite being found only in New Zealand and (previously) Australia, are more closely related to South American bats than to their South Pacific neighbors. Supercontinental Bust-Up Way way back in the day, like, say 200 million years ago, ancestral forms of Australia, Antarctica, South America, Africa and India, plus the twinkle in the eye of geological forces that would one day be New Zealand, were all clumped together into the supercontinent Gondwana. Over millions of years, Gondwana broke up and the various pieces moved around, eroded or emerged from the sea thanks to the magic of plate tectonics (folks, I am using the word "magic" poetically here, so don't kvetch about me suggesting the cold hard science of plate tectonics is anything less real than it is). You can read more about Gondwana, specifically New Zealand's part in the whole tectonic saga, in a handy primer put out by the country's Department of Conservation. When the last bits of Gondwana were going their own ways around 40-50 million years ago, the climate was significantly warmer (Antarctica was downright balmy) and several species of flora and fauna were distributed throughout what was left of the supercontinent, including ancestral burrowing bats. Once Gondwana broke up for good (Australia's not coming back, South America, get over it! Move on with your life!) and the climate cooled, those pan-Gondwana populations became isolated but continued to evolve...Well, other than the ones that went extinct. The Vulcanops researchers believe the general cooling and drying out that occurred in the wake of Gondwana's break-up may have ultimately done in the big burrowing bat. Read More, Learn More "Ghost of Gondwana" in the subject line, by the way, is a bit of a rip-off from a great book by George Gibbs, Ghosts of Gondwana: The History of Life in New Zealand. I picked it up when I lived in New Zealand, but if the lost supercontinent's secret history, told in fossils, is of any interest to you, I highly recommend you dig it up however you can. Vulcanops debuted this week in Scientific Reports and the paper detailing this marvelous animal is open access, so hop on it. There, those of you obsessed with size will learn that researchers estimate Vulcanops' weight was about 40 grams (around 1.5 ounces), compared with the median weight of living bats, which checks in at a mere 13.8 grams (just under half an ounce). What were you expecting, a bat the size of a Haast's eagle?