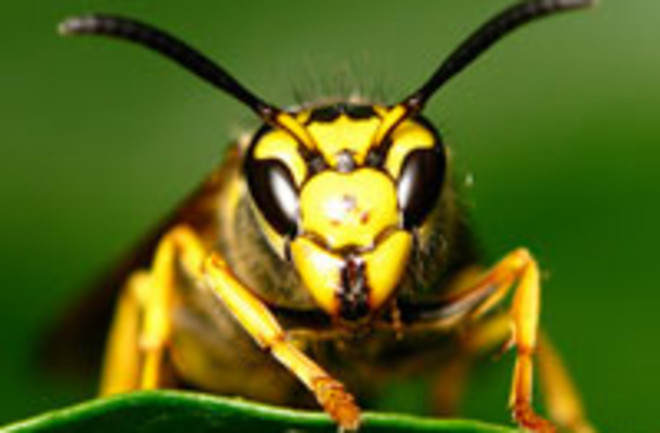 Think you're having a rough day? Try being a wasp larva, destined never to fully develop, but instead to sacrifice yourself to save your luckier siblings. Welcome to the twisted world of the wasp Copidosoma floridanum, a species whose bizarro reproductive strategies were recently elucidated in research out of Tokyo University of Agriculture and Technology. A female wasp will lay her one or two eggs inside of the egg of a caterpillar known as a cabbage looper, according to New Scientist:

"One egg might not sound so bad, but [this wasp egg] is no ordinary egg. It is polyembryonic, meaning that the single embryo cell at its heart can repeatedly clone itself. As a result, just one egg can produce up to 2000 offspring."

The wasp larvae develop inside the caterpillar; there can be thousands of the wasp usurpers in a single caterpillar. The larvae that will later become adult wasps, known as reproductive larvae, survive by feeding on the caterpillar's blood. The other larvae are there just to fend off larvae from other wasp eggs that might have been laid in the same caterpillar egg:

"The second caste is the precocious larvae. These develop earlier than the reproductive larvae – hence their name – and they look quite different, with a thinner body and larger mandibles. They have no sex cells and will never become adults or reproduce. These are the child soldiers."

Makes our own sibling rivalries seem pretty tame, by comparison.