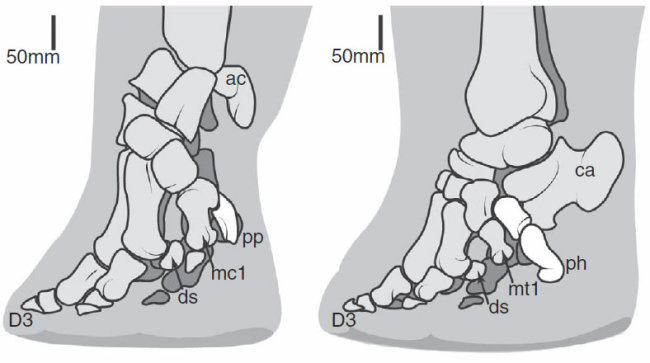 It turns out that elephants have a sixth toe. They’ve adapted one of their wrist bones into a strut that supports their giant squishy feet. I wrote about this for Nature (excerpt below), but here’s my full interview with John Hutchinson, the man behind the discovery, and the owner of (probably) the world’s largest collection of frozen elephant feet.

Elephants walk on the world’s biggest platform shoes. Now, John Hutchinson at the Royal Veterinary College in London and his team have found that their footwear also contains hidden stiletto heels. Even though an elephant’s leg looks like a solid column, it actually stands on tip-toe like a horse or a dog. Its heel rests on a large pad of fat that gives it a flat-footed appearance. The pad hides a sixth toe — a backward-pointing strut that evolved from one of their sesamoids, a set of small tendon-anchoring bones in the animal's ankle. This extra digit, between 5 and 10 centimetres long, had been dismissed as an irrelevant piece of cartilage. Almost 300 years after it was first described, Hutchinson finally confirmed that it is a true bone that supports the squishy back of the elephant’s foot. The ones on the hindfeet even seem to have joints.