Meet the Fish With a Switchblade on Its Face 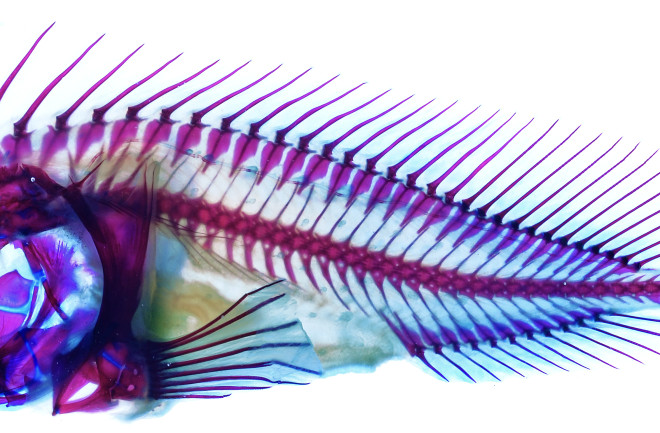 A cleared and stained specimen of a Warty Prowfish (Aetapcus maculatus). (Credit: William Leo Smith) Deadly fish known for their spikes and venom may pack a newfound weapon — switchblades on their faces, some of which can fluoresce green, a new study finds. The discovery began when ichthyologist William Leo Smith at the University of Kansas at Lawrence dissected a wispy waspfish that had been his pet. Wispy waspfish are a species of stonefish, a group inhabiting Indian and Pacific coastal waters that are among the deadliest in the oceans. Many protect themselves with spikes or camouflage, and "some stonefishes are the most venomous fishes on Earth — they can easily kill an adult human," Smith said. "Defensiveness has just run amok in this group."

Unexpectedly, Smith discovered that his pet essentially possessed a switchblade on its face. The weapon is known as a lachrymal saber: "lachrymal" meaning "concerned with tears" and referring to the armament's placement on each cheek below the eye. And saber, well, it pretty much speaks for itself. The weapon is usually tucked alongside their face, but when danger looms a series of muscles and ligaments whip the wicked blade into action. The lachrymal saber can ratchet to different angles depending on the situation, in addition to locking all the way in or out.

The lachrymal saber. (Credit: William Leo Smith) This switchblade is likely defensive — in pictures of stonefish in the mouths of predators, the lachrymal saber is always locked out, Smith said. "As far as I can tell, the saber itself or its surrounding tissue are not venomous," he added. The lachrymal saber may have remained undiscovered until now "because only a couple of researchers have really looked at the anatomy of this group," Smith noted. “These fishes are kind of rare in the wild and people don't study their physiology and behavior, so they have never seen them lock the lachrymal saber out."

Stonefishes belong to a group of primarily marine fishes commonly referred to as the mail-cheeked fishes. "The mail-cheeked fishes have two features that may be precursors or stepping stones toward the lachrymal saber," Smith said. "First, they have spines all over their heads and thus the ability to make the enlarged lachrymal spine. Second, the cheek muscles that move the lachrymal saber are attached to a bony strut under the eye in these fishes that give them their common name." To learn more about the lachrymal saber and stonefish, the researchers analyzed specimens collected in Indian and Pacific waters as well as fish tissue samples housed at the University of Kansas Biodiversity Institute. They discovered this weapon appears unique to stonefishes. "There are 134 species of stonefishes, and it is probably safe to assume they all have them — I have probably checked around half of them," Smith said. The length of the lachrymal saber can range from about half to 2.5 times the width of the eye in any given stonefish, Smith said. "Generally, the larger the maximum size a stonefish can grow to, the smaller the saber tends to be — in other words, in small species, it is comparatively larger," he said. And the saber isn’t just a cool discovery, it’s also helping Smith to better categorize the stonefish family tree. "All the fishes that this study classified in the stonefish family were previously split across eight separate families," Smith said. "Because we had this one complex feature that is easily recognizable, it means new species can be placed correctly in this family." The researchers now want to know when stonefish use the lachrymal saber and if it possesses secondary functions. "Do they only use it defensively, or do they also use it with battling each other over mates?" Smith asked. "Do potential mates choose larger or more colorful sabers?" Moreover, in one species of stonefish the researchers examined, an eastern fortescue, the scientists found that under fluorescent light, its lachrymal saber fluoresced green whereas other regions of its head glowed red. "Do these fishes have the necessary filters in their eyes to see this fluorescence?" Smith asked. "Does the fluorescence have a major role or not?" "We are still making so many discoveries in the ocean," Smith said. "At a time when it is easy to get caught up with all the negative human activities in the world, it is awesome that we can continue to make such fundamental discoveries. Nature is amazing." Smith and co-authors Elizabeth Everman and Clara Richardson detailed their findings online February 15 in the journal Copeia.