Meet the Denisovans, the Newest Members of the Human Tree of Life 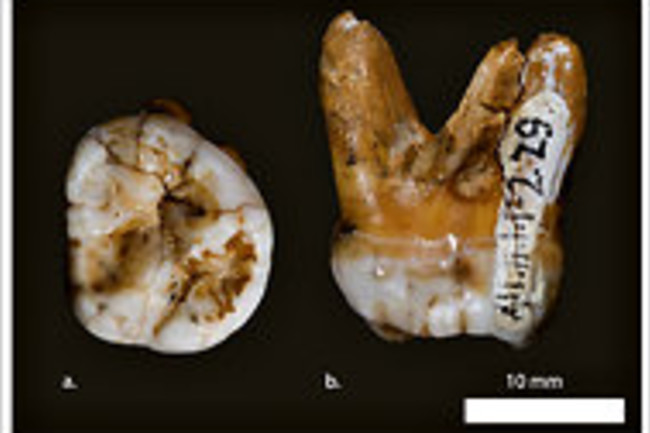 Last March I wrote here about a 50,000-year-old pinky bone found in a Siberian cave that might belong to a previously unknown kind of human. Scientists had isolated mitochondrial DNA from the bone, which suggested that it belonged to a separate lineage that was neither Neanderthal nor human.

Well, the other shoe has dropped, and it turns out to be a big old boot. In tomorrow's New York Times, I report on a new paper in Nature in which the scientists describe the nuclear genome they have now extracted from the finger bone.

Its owner looks to be a cousin to Neanderthals, belong ing to a lineage that split off from them about 400,000 years ago. The members of this lineage have been dubbed the Denisovans, after the name of the cave where the pinky bone was found, Denisova.

But wait! There's more. First off, the scientists also got Denisovan DNA out of a tooth in the cave. It's a tooth unlike human or Neanderthal teeth, the scientists claim.

And there's more! Neanderthals interbred with the first humans to emerge out of Africa, it appears, judging from the presence of Neanderthal DNA in European and Asian genomes (but not African ones). Now it appears that Denisovan DNA is in the genomes of people from New Guinea, but no one else.

I know! New Guinea? Siberia? You can't get there from here! There is so much to this story that I'm going to have to blog some more about it in the near future. For now, check out the article.

All I want to say for now is that a week in which I get to write about a cannibal Neanderthal family massacre and a new lineage of humans known only from a pinky and a tooth — whose genes survive today even if they themselves do not — is the kind of week that refuels my love for science. At the time, scientists were reporting on the 15,000 base pairs in its mitochondrial DNA that they had sequenced