The first interstellar spacecraft could carry microscopic passengers. So the search is on for ideal candidates. 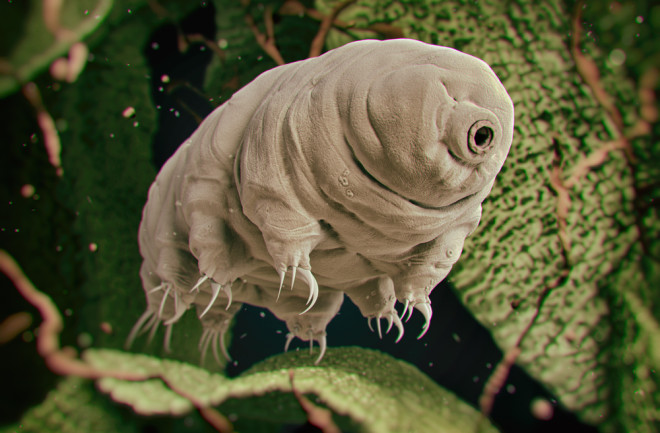 Project Starlight is a NASA-funded mission to develop the technologies to enable interstellar space exploration. The approach is simple—these spacecraft will fly out of the solar system on the tip of a powerful Earth-based laser beam that accelerates the vehicles to a significant fraction of the speed of light.

Of course, these craft will be tiny—weighing just a few grams each. But they are set to become Earth’s most distant interstellar travellers, outpacing in just a few days the distance that the Pioneer and Voyager spacecraft have travelled in decades.

Now Stephen Lantin at the University of Florida and colleagues, say these spacecraft could be capable of carrying Earth’s first interstellar astronauts. These astronauts will not be human, they say. Instead, Project Starlight spacecraft should carry much smaller and hardier creatures that will be capable of surviving the extreme temperatures, accelerations and radiation that such a voyage is likely to entail. And Lantin and co are already designing the capsules that will carry these creatures.

The spacecraft, say the team, will also carry sensors that study how these creatures react to interstellar flight conditions and provide data that can be used to prepare future missions.

So what species are most suitable for the task? Lantin and co have selected potential candidates based on a number of factors. These organisms must have a low metabolic rate so that they can survive for extended periods with little sustenance, preferably in a state of suspended animation. They must also be resistant to radiation damage and hardy enough to survive the high acceleration and temperature extremes.

One candidate is the nematode worm, a creature just a fraction of a millimetre long that is a laboratory workhorse for biologists. The nematode genome has long been sequenced and this species was the first to have its nervous system mapped entirely.

Nematodes are also transparent which makes it is straightforward to observe phenomenon such as their gene expression and cellular physiology. They can also be survive in suspended animation either by drying them out or cooling. However, they are relatively susceptible to radiation damage, their lethal dose being an order of magnitude less than some other species can survive.

One of these hardier options is the tardigrade, or water bear (see image above). These are short, chubby, aquatic creatures with four pairs of legs, that are a similar size to nematode worms. However, they are more robust to radiation damage and tolerate microgravity well, when in other species it can trigger various oxidative stress mechanisms. Tardigrades can also enter a state of suspended animation in which their metabolism drops to 0.01 per cent of its usual level.

Other options include single celled organisms, such as bacteria. Deinococcus radiodurans, for example, makes redundant copies of its genome, handy for mitigating the damage from radiation, and can survive a wide range of extreme environments. Indeed, the Guinness Book of Records lists it as the world’s hardiest creature.

Lantin and co are already developing microfluidic chambers that can house the first interstellar astronauts, revive them when necessary and then perform a suite of tests to monitor their condition. These experiments would need control samples in low Earth orbit or on the ground, so that the results can be compared.

An important factor in all this will be biosecurity. “Sending Earth-based life to interstellar space using a directed-energy powered craft requires addressing risks of possible contamination of extrasolar planets,” say Lanton and co.

However, they point out that any spacecraft travelling at a significant fraction of the speed of light has a built-in biosafety mechanism, since these vehicles cannot slow down. Any collision with a distant exoplanet would create a kiloton-sized explosion likely to kill off any surviving creatures pm board.

A more potent risk will be to planets in our own solar system, should an accident cause the spacecraft to collide with a neighbour. In that case, the spacecraft will need to be designed with a biosecurity mechanism that prevents biological contamination.

All this might seem like a distant ambition but Lantin and co insist that preparations should begin now. “We are rapidly approaching the technological capability for interstellar flight on meaningful timescales,” they say.

And the data from these kinds of experiments could help answer some of science’s most fundamental questions. “Interstellar probes may yet bring us closer to answering questions long pondered in the stories of science fiction, such as “Can humans travel to other star systems?”,” say Lantin and co.

Perhaps more significantly, these experiments could through some light on whether life could have spread through the cosmos in seed form, an idea known as panspermia. In that sense, these missions could help us understand the origin of life itself.