Meet Mephisto, the worm that rules the underworld 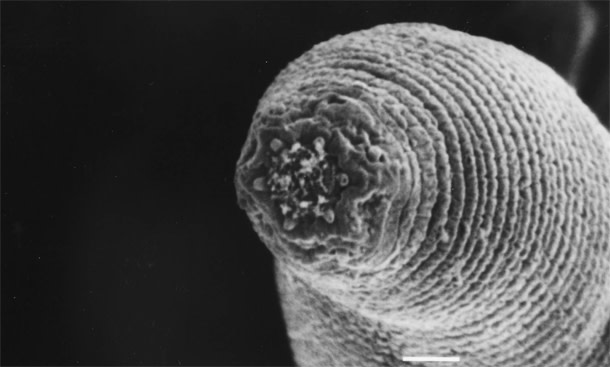 The Beatrix gold mine lies a few hours outside of Johannesburg, South Africa, in one of the richest gold fields in the world. It extends more than two kilometres underground and every year, 10,000 workers extract around 11 tonnes of gold from the mine. But recently, something living came up with the gold, a creature that has been named after Mephisto, the Devil from the Faust legend. So far, this seems like something from a stock fantasy tale, where miners dig “too greedily and too deep”, and release an ancient unspeakable evil. Fortunately, the creature that lurks in the Beatrix mine – Halicephalobus mephisto –is just a worm, barely half a millimetre long. It’s no demon of shadow and flame, but it is an incredibly surprising find. It’s an animal that lives where no other animals were thought to exist, in the rocky underworld known as the “deep subsurface”. The deep subsurface refers to anything deeper than 8 metres, below than the reach of rabbit warrens and tree roots. It is a hot, cramped world, high in pressure and low in oxygen, a far cry from the sun-drenched, wind-swept surface. But it’s also teeming with life. There are more microbes in the subsurface (bacteria, and the extreme archaea) than there are up top, and collectively, they might even outweigh all surface life. Put every tree, elephant and human on a giant scale, and they’d be balanced by the microscopic masses that lurk underground. Until now, this empire of microbes was thought to be free of more complex life. In American, scientists had found a smattering of algae, fungi and amoebae 200 metres below the ground. In Sweden, they had found even fewer fungi up 450 metres down. Deeper still... nothing. Gaetan Borgonie from the University of Ghent changed that by discovering H.mephisto in the Beatrix mine, in a shaft 1.3 kilometres deep. It was just one of four different species that he eventually recovered. Two of the others came from a similar depth in the Driefontein mine, but the fourth was found 3.6 kilometres down in Tau Tona, the world’s deepest mine. H.mephisto and its kin aren’t worms in the sense of the earthworms we’re familiar with. They are roundworms –nematodes – one of the most successful groups of animals on the planet. The great naturalist EO Wilson likes to say that “if you were to make all of the solid matter on the surface of Earth invisible... you still could see its outline in nematode worms.” Borgonie has had a longstanding fascination for nematodes. “When you’ve been doing this for 20 years, you get an appreciation how of robust these worms are. One species survived the Space Shuttle Columbia breakup in 2003,” he says. These creatures have evolved to be hardy. “Imagine you’re a nematode living in the soil in your garden. One day it is scorching hot. Within short notice, it can rain and flood the soil, cutting off oxygen. Every night it cools down and in winter it freezes. In other words terrestrial nematodes experience stress for breakfast, lunch and dinner every day.” Borgonie knew that if any animal should be living in the deep subsurface, it would be a nematode. “I started looking for ways to lay my hands on samples from the deep,” he says. That search led him to subsurface specialist Tullis Onstott from Princeton University, who simply invited him to South Africa to “look for yourself”. Once there, Borgonie had help from Esta van Heerden and Derek Litthauer from the University of the Free State. They had excellent relationships with the local miners, and convinced them to let Borgonie search the caverns for nematodes. “Esta and Derek invested a lot of energy and money into this when many others rejected the idea as impossible nonsense,” says Borgonie. “The miners were exceptionally cooperative too. They helped us a lot at every turn and since we were not allowed to go alone in the mine, they accompanied us every time.”

Borgonie extracted his first samples in 2007 and he soon discovered H.mephisto, in water from the Beatrix mine. He took great care to ensure that the creatures weren’t surface dwellers that had somehow contaminated the samples. He searched for them in soil samples around the boreholes, or other samples of mining water. He didn’t find any. He checked for nematodes in the water used in the drilling operations. Again, he didn’t find any (nor did he expect to; this water is treated with so much bleach that it would have killed any nematodes that it touched). Finally, Borgonie checked the chemical composition of the water that the nematodes came in. It had levels of oxygen, sulphur and other dissolved chemicals that matched those expected from underground sources, and distinct from water from the surface. And by carbon-dating the water, Borgonie calculated that it must have been isolated from the surface for anywhere from 3,000 to 12,000 years. “Few sites are more difficult to sample than deep underground fractures, with the need for strong tools and risks for contamination,” says Karsten Pedersen from Gothenburg University, who also studies life in the subsurface. Nonetheless, he is convinced. “The authors have argued [their case] very well and I find it very likely that the nematodes did live in the fractures.” To H.mephisto and the other nematodes, the subterranean world is an all-you-can-eat larder. They feed on bacteria and other microbes that grow in rich mats on the rocky surface. There are up to a trillion such cells for every one nematode, a feast that could keep H.mephisto going for around 30,000 years. There’s no risk of starving underground. There’s clearly more going on below our feet that anyone had previously thought. “The nematodes eat the deep subsurface bacteria and the bacteria will certainly feast on dead nematodes,” says Borgonie. Nematodes aren’t the only threats that the subsurface bacteria face. In deep Swedish groundwater, Pedersen has found hordes of viruses that infect bacteria, often in numbers greater than those of their prey. The bacteria aren’t the only inhabitants of this underground world – they’re just part of its food web. To thrive in the subsurface, an animal must be very tough, and H.mephisto fits the bill. It’s a nematode’s nematode, a species that has adapted to tolerate hot temperatures that would kill most of its land-living kin. It’s not the only one – other nematodes have been found in hot springs, with waters that reach 50 to 60 degrees Celsius. “[Nematodes] have a reputation as some of the toughest multi-cellular life forms that have colonized the most inhospitable habitats,” says Andreas Teske, from the University of North Carolina Chapel Hill. “They even occur in the dry, frozen soil of the Antarctic dry valleys. Their discovery in the deep subsurface adds to their impressive versatility . They have colonized every hidden corner of the planet where the most basic requirements are met - oxygen, water, bacteria as food.” Borgonie also expects to find nematodes in the sediments beneath the ocean floor (this ‘ocean subsurface’ is probably an even larger habitat than its counterpart on land). And he speculates that the discovery of complex life in the Earth’s subsurface could have implications for the search for life on Mars or other planets of our Solar System. “When looking for life, the present idea that [you might only find] single-celled life forms could be wrong,” he says. “I am not stating that you will automatically find complex life but at least the possibility should be considered.” Reference: Borgonie, Garcia-Moyano, Litthauer, Bester, van Heerden, Moller, Erasmus & Onstott. 2011. Nematoda from the terrestrial deep subsurface of South Africa. http://dx.doi.org/10.1038/nature09974More on nematodes:

And more about the strange life within South Africa’s gold mines: An ecosystem of one in the depths of a gold mine