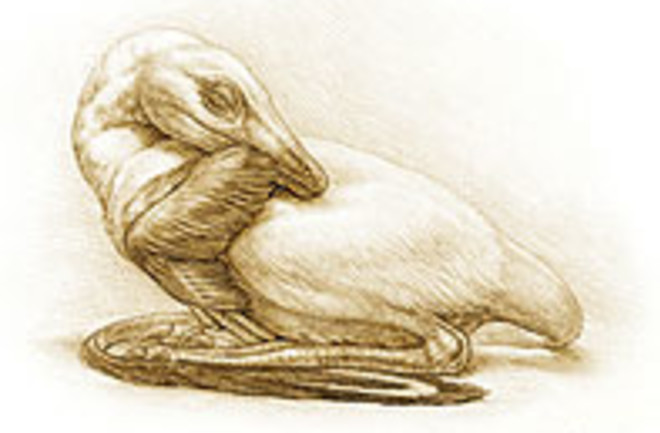 Paleontologists have found their sleeping beauty: the first dinosaur fossil discovered in a birdlike sleeping pose. Given the species name Mei long, Chinese for “soundly sleeping dragon,” the duck-size dinosaur apparently died while it napped. Its face is nestled behind one forelimb, which resembles a wing except for the long, clawed fingers at the end. The whole arrangement (illustrated below) looks amazingly like the tucked-in nighttime repose of modern birds.

Mei long ’s slumber provides rare evidence of a behavior linking dinosaurs to their living bird relatives. “It’s not the kind of thing I would expect to see in a fossil,” says Mark Norell of the American Museum of Natural History, who described the bones in conjunction with Xing Xu from the Chinese Academy of Sciences in Beijing. The researchers were able to study Mei long ’s pose precisely because the fossil beds of the Liaoning Province in southeastern China preserved the dinosaur in exquisite three-dimensional detail. The region has yielded several other specimens that similarly show signs of a rapid burial. Norell suspects that poisonous gases from a volcanic eruption asphyxiated the dinosaur, then quickly buried it under a blanket of fine ash.