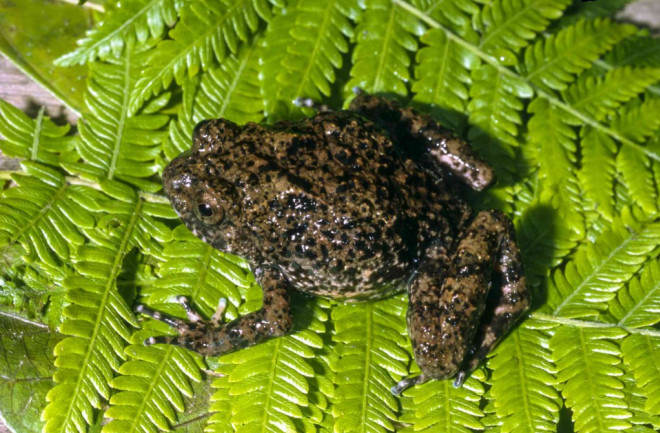 Rhombophryne vaventy. Image courtesy Frank Glaw Forget Six Flags — Madagascar’s Marojejy Massif is the planet’s real Magic Mountain. Located in one of the country’s poorest economic regions but among the richest in biodiversity, 2,000 species of flowering plants and nearly 300 species of frogs call the mountain’s steep rainforest terrain home. And now, thanks to a recent discovery, it is also home to a frog that’s brand new to science: Rhombophryne vaventy, or the huge rhombus frog.

The discovery originated when Mark Scherz, a 23-year old graduate student at Ludwig Maximilian University in Munich, tracked down his mentor Frank Glaw at the Bavarian State Collection of Zoology and asked if he could do some taxonomy. Glaw set his charge to work on a lumpy specimen he had collected at his Marojejy campsite in 2005. Figuring out exactly what the frog was and where it fit among its relatives was no small task, thanks to its “plain” appearance and the lack of field observations. Taking an integrative approach to taxonomy (versus the traditional and still-common practice of relying solely on morphology), Scherz examined genetics, morphology, and a technique that’s still cutting-edge for distinguishing species: CT scans. Wrapping the frog in alcohol-drenched paper (don’t worry, it was long dead) and shooting X-ray beams at it while rotating its position, Scherz was able create 3-D computer images of its skeleton while not destroying any of the tissue. The non-invasive method allowed Scherz to see subtle but crucial skeletal features (such as the length of a segment of the thumb bone) that were critical for recognizing the rhombus frog as a new, unique species. The CT technology also enabled him to see the frog’s last meal (or perhaps last several), revealing a millipede, six ants, a spider, a fly, and at least three different species of beetle in its stomach and large intestine. It’s no wonder Scherz named it vaventy, the Malagasy word for “huge,” in the paper describing the find, published in Zootaxa.

X-ray of the new frog species.

The new species is part of a larger group called narrow-mouthed frogs, whose ancestors arrived in Madagascar millions of years ago on rafts of vegetation or debris. Finding themselves on a huge but isolated island with lots of available niche space, evolution took over, resulting in a radiation of species adapted to a wide variety of habitats, from treetops to burrows underground. Scherz’s new find is an example of the latter, spending much of its time underground and only occasionally surfacing (unfortunately for it, at the same time Glaw was pitching his tent). While only two specimens have ever been collected, if it is anything like its brethren, the frog lays its eggs in seeps of water in burrows, which then hatch into non-feeding tadpoles that are nourished only by their yolk and are guarded by at least one parent.

Taxonomists, like other collectors, have an obsession with counting things. In this case, the collectible is the total number of frog species in Madagascar. “Mine was the 297^th [described] species,” Scherz said. “It’s a matter of weeks before we reach the 300^th, and it’s a bit competitive now.” But even as the heat is on to reach the third-century mark, the work is nowhere near over. A 2009 study pointed out that barely more than half of the known species of Malagasy frogs had been formally documented and described. And it estimated the total number of frog species, both known and not-yet-described, to be around 465. Scherz says he guesses it’s more like 600 to 650. “I did the math, and it would take me about 83 years to describe them all.” But the animals may not have 83 years. Biodiversity hotspots like the Marojejy Massif are under threat from illegal poaching, mining and deforestation. Many species, including the huge rhombus frog, have a very limited distribution, so much so that Scherz proposes listing it on the IUCN Red List as “Vulnerable.” When it comes to frogs, Madagascar is “unlike anywhere else in the world,” according to Scherz. But to try and save all that biodiversity, you have to know what you’re protecting. “The taxonomy has to come first,” he says.