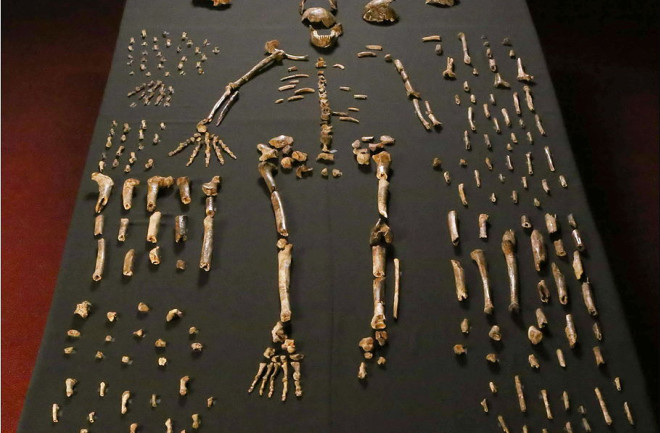 In 2013 a couple of spelunkers, caving 100 feet underground in South Africa, wriggled down a narrow vertical chute. They dropped into an uncharted chamber and in the flickers of their headlamps saw human-like bones scattered across the ground. It was a new species of hominin.

The fortuitous discovery in the Rising Star Cave system led to one of the most spectacular and puzzling fossil collections in paleoanthropology. The chamber contained more than 1,550 skeletal pieces belonging to at least 15 individuals from a previously unknown human ancestor, Homo naledi. Dated between 230,000 and 330,000 years ago, the species’ relatively recent age and odd amalgamation of traits changes our understanding of human evolution.

The H. naledi excavations got — and deserved — worldwide attention in part because they were so harrowing.

To reach their final resting place — now called Dinaledi Chamber — you have to creep and contort through hundreds of feet of darkness. En route you face obstacles: Superman’s Crawl, a 10-inch high tunnel, wormed through on your stomach with one arm extended; Dragon’s Back, a nearly 50 foot climb up jagged dolomite requiring ropes and harnesses; and that final vertical chute, about as wide as printer paper, back down another 40 feet. Oh, and once you arrive, you have to excavate the fossils and get them back to the surface.

An illustration of Dinaledi chamber, showing the distribution of bones and some of the geologic features of the cave. (Credit: Paul H. G. M. Dirks et al.)

Most of us could not enter Dinaledi Chamber, if not from fear then certainly from physics. We’re just too big. That includes excavation director Lee Berger, a paleoanthropologist at the University of Witwatersrand, South Africa. To recruit appropriately-sized and skilled excavators, in 2013 he posted an ad on social media calling for “tiny and small specialised cavers and spelunkers with excellent archaeological, palaeontological and excavation skills,” as reported in The Guardian.

For a paleoanthropologist, the H. naledi specimens are jaw-dropping for other reasons.

To begin with, the number of fossils is staggering. In addition to the 1,550 specimens reported in 2015 from Dinaledi Chamber, researchers have since found 131 hominin bones in another chamber, a couple hundred feet away, reached by a separate path from the surface. It’s the largest collection of early human fossils ever discovered in Africa, the motherland of our evolution.

When it comes to human ancestors, some species are only known from a few fragmentary fossils — perhaps a skull, a handful of teeth and some broken limb bones from several individuals. In contrast, nearly every one of the 206 bones in a human skeleton can be found within the H. naledi assemblage. And those bones come from at least 18 different individuals of both sexes, ranging from infants to elderly folks. It’s a real community.

The Wonders of naledi

Physically, H. naledi looks like it came from a variety of human ancestors, spanning millions of years of evolution. Had an assortment of their bones been spread on a table, most anthropologists would have thought it was a joke.

Some Homo naledi traits resemble early hominins that lived roughly 2 to 4 million years ago, such as their gorilla-sized brains, protruding jaws and curved fingers, well-suited for climbing trees. At the same time, they have features that only appear within the past 2 million years among members of our genus Homo. For example, H. naledi bodies were nearly as big as the average living person, where most ancient hominins were smaller. A 2017 Journal of Human Evolution study estimated specimens to have weighed ~100 pounds and stood between 4 foot 5 inches and 5 foot 1 inch. And although their skulls measured about one-third of ours, the organization of certain brain regions thought important for communication and planning is similar, according to a 2018 paper in the Proceedings of the National Academy of Sciences.

This mix of ancient and modern-looking features permeates every part of the skeleton. Take the mouth: The teeth get much bigger toward the back, a trait seen in early hominins. Yet, overall the teeth are small and the jaw is lightly built like modern humans. Or the hands: The curved fingers seem suited for climbing, like in primitive hominins, but the modern thumbs and wrists appear dexterous enough to craft tools as Homo sapiens do.

Based on when traits appear in other hominin species, researchers concluded that the most likely age of H. naledi was 912,000 years old — but their possible dates ranged from 2.4 million to present-day. Just by looks, other experts speculated the species must be older than 1.5 million years.

So it was a surprise in 2017, when a study in eLife reported the specimens entered the cave between 236,000 and 335,000 years ago. H. sapiens existed in Africa by this time, so it’s conceivable that our ancestors encountered H. naledi. We can’t say if they interbred, however, because no DNA has been extracted from H. naledi bones.

The lack of DNA also makes it difficult to determine where the species fits in the hominin family tree. We don’t know how distantly they were related to us. Based on physical appearance, anthropologists have proposed several different points (here, here) at which the H. naledi lineage likely diverged from ours. The split could possibly have happened before the Homo genus emerged a couple million years ago, prior to Homo erectus ~1.8 million years ago or possibly within the past ~1 million years right before H. sapiens and Neanderthals diverged.

How They Got There

The elephant in the room is how H. naledi got in the chamber — deep within a cave through a dark, torturous path. The excavation team has argued and maintained that living H. naledi individuals deliberately carried or dropped the bodies of their dead into these chambers. This could mean the species had complex thoughts about death and the afterlife — or that they wanted to avoid rotting carcasses attracting predators. In either case, that would be fairly sophisticated behavior for such small-brained hominins.

Supporting their “deliberate body disposal hypothesis”: It’s improbable they were living down there, considering no other apes or hominins dwell so far from the sun. And no artifacts or traces of habitation were found during excavations. Next, no similar-aged animal bones were found in the chambers, making it unlikely they or anything else fell in through some kind of sinkhole. There are also no bite marks on the bones, implying carnivores didn’t drag them there. Finally, some of the bones were articulated — lying with adjacent bones, as they would be in your body — suggesting they were still attached by flesh, ligaments or other soft tissue when deposited.

But other scientists doubt this explanation. There may have been easier routes to the chambers, which have since collapsed. Or perhaps H. naledi groups hid in the cave to evade predators, but became trapped. Some anthropologists even suggest those predators were us, Homo sapiens.

One of the biggest discoveries in paleoanthropology, ever, Homo naledi leaves us with more questions than answers. But the cool thing is anyone can try to chip away at the mystery. Unlike some hominin specimens, which can only be studied by professionals with access to the real fossils, the H. naledi remains have been 3D scanned and posted online. Anyone, including you, can download and study them. They’ve certainly come a long way from Dinaledi chamber: from cave darkness to daylight to limelight.