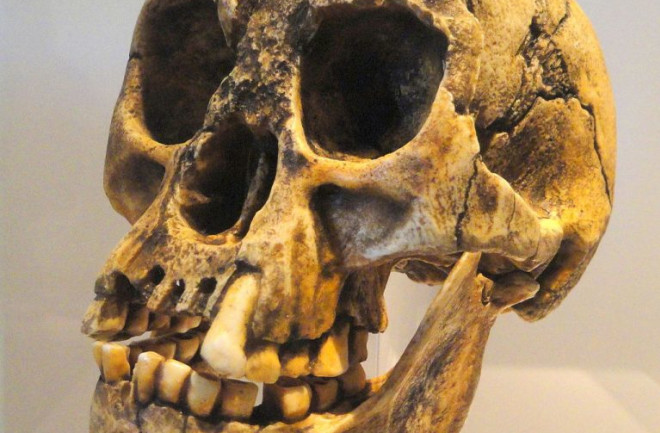 Homo floresiensis, popularly called the “hobbits,” may have interacted with the ancestors of modern humans. (Credit: daderot/Wikimedia Commons)

60,000 years ago, diminutive beings dwelled on the Indonesian island of Flores, alongside komodo dragons, pygmy stegodons and real-life rodents of unusual size. The now-extinct humans — known scientifically as Homo floresiensis, and popularly as the hobbits — stood less than 4 feet tall, with brains one third the size of living people. Yet, they made stone tools, butchered meat and somehow crossed miles of ocean to colonize their tropical home.

It’s been 15 years since researchers first announced H. floresiensis. The discovery astonished anthropologists worldwide — and called for immediate revision of the standard account of human evolution. Over the years, we’ve learned more about the species’ appearance, habits and time on Earth. But the hobbits’ origin and fate still remain a mystery.

The Days of Hobbits

The H. floresiensis fossils were found in Liang Bua cave on Flores, a narrow island — about 200 miles long and 40 miles wide — between Southeast Asia and Australia. Initially, researchers reported that the remains dated between 12,000 and 95,000 years old. For an extinct human species, 12,000 years ago is crazy recent — modern humans were building permanent settlements and monuments by then.

It turns out, the sensational dates were wrong. Continued excavations and analysis showed the hobbit fossils derive from sediment layers between 60,000 and 100,000 years old. And artifacts likely made by H. floresiensis extend between 50,000 and 190,000 years ago, suggesting the species was there even further back, even if we haven’t found their bones.

The thought of hobbits persisting until at least 50,000 years ago is nevertheless exciting. They very well could have encountered our own species, Homo sapiens, thought to have reached Australia by 65,000 years ago. Perhaps modern humans, migrating Down Under, met (and maybe killed) hobbits along the way.

So far only bones from Liang Bua are indisputably attributed to H. floresiensis, but other sites have yielded material probably from the species or its direct ancestors.

A 2016 Nature paper described hobbit-like fossils at Mata Menge, also on Flores, about 45 miles from Liang Bua. The finds included stone tools, a lower-jaw fragment and six tiny teeth, dated to approximately 700,000 years ago — substantially older than the Liang Bua fossils. Although the Mata Menge remains are too scanty to definitively assign them to the species, most anthropologists consider them hobbits.

At a third Flores site, researchers found no human fossils, but uncovered 1 million-year-old stone tools, like those from Liang Bua and Mata Menge. Assuming these artifacts were made by H. floresiensis or its ancestors, the hobbit lineage inhabited Flores at least from 50,000 to 1 million years ago. That’s over a half million years longer than our species has even existed.

Digging in Liang Bua since 2001, an international team has uncovered bones from about a dozen hobbits. But the star specimen is called LB1. It’s the most complete individual, comprising a skull, partial pelvis and bones from the limbs, hands and feet. LB1 appears to be a female adult (her wisdom teeth are fully formed), but measured just 3 foot 6 inches tall and weighed 75 pounds — as tall as a present day 4-year-old, but heftier.

Using micro-CT scanning (high resolution 3D X-ray imaging), a 2013 study estimated her brain volume to be about 426 cc (~1.8 cups). Similarly sized brains are characteristic of much earlier human ancestors, such as Australopiths who lived in Africa some 3 million years ago. The global average for modern humans is ~1,350 cc (5.7 cups), over 3 times larger.

Besides their wee bodies and brains, hobbit skeletons show a mix of primitive and modern-looking traits. Like Australopiths and other early hominins, LB1 has ancient features including broad hips, a short collarbone and forward-positioned shoulder. At the same time, the hobbits’ brow ridges, skull thickness and brain shape are more modern, resembling H. erectus and later species.

The Liang Bua team has also dug up more than 20,000 stone tools. Most are made from volcanic rocks, deliberately fractured to have sharp edges for slicing and dicing. This simple technology resembles the earliest widespread style of toolmaking, the Oldowan, made by numerous ancestral species, starting in Africa 2.6 million years ago.

Big questions persist about the little creatures: Where do they fit in the human evolutionary tree and why did they go extinct?

Anthropologists have put forth three main hypotheses for the hobbits’ evolutionary origins. One idea, which now lacks support, was that the population belonged to our species, Homo sapiens, but suffered from a genetic or metabolic disorder, responsible for their unusual features. Proponents suggested conditions like microcephaly and Down syndrome, but most scientists conclude the physical symptoms of these disorders are not reflected in H. floresiensis‘ skeletal traits. Furthermore, the 700,000-year-old Mata Menge fossils indicate the hobbits were a long-lived lineage, rather than an isolated, diseased community.

That leaves two hypotheses standing: The hobbits were dwarfed H. erectus — taller, brainier ancestors who appeared ~1.8 million years ago — or the descendants of earlier species, with hobbit-like stature.

The dwarfed H. erectus hypothesis is based on the fact that the evolutionary pressures of island life often cause mammals to differ in size from their mainland relatives. Over time, small animals enlarge because there are fewer predators and big species shrink because there are fewer resources. H. erectus fossils at least 1.2 million years old have been found on the nearby island of Java. On Flores the “island rule” led to the evolution of giant rats and pygmy stegodons (an extinct elephant cousin) — why not H. floresiensis from Javanese H. erectus?

Critics say it’s not clear island dwarfing would cause hominins to shrink this particular way, especially when it comes to skulls. There’s an assumption that once our ancestors evolved H. erectus-sized brains, they couldn’t go back. Plus, dwarfing would have occurred in just a few hundred thousand years. Researchers question if this is enough time for such significant evolutionary change.

Alternatively, the hobbits may have descended from tinier, older ancestors such as Homo habilis or Australopiths. The trouble here is no fossils from these species have been found outside of Africa. Scientists doubt they were capable of long-distance migration over land and sea. Even during the Ice Age, when global sea levels were lower, Flores seems to have been nearly 12 miles from the closest neighboring islands.

Genetic analysis could theoretically solve this, but so far researchers have not been able to recover any DNA from the hobbits — and they’ve definitely tried. It’s rare for DNA molecules to survive in the hot, humid conditions of a tropical island. In 2018 geneticists tried another approach. They searched the genomes of living, indigenous pygmy people on Flores to look for stretches of DNA that might have been inherited from ancient interbreeding with H. floresiensis. While the study found evidence for past mating with Neanderthals and Denisovans — characteristic of most populations in Oceania and Southeast Asia — there was no sign of interbreeding with more distant relatives like H. floresiensis.

As for the hobbits’ demise, they may have succumbed to environmental change or just the precariousness of sustaining a small, isolated population. But my money is on modern humans. Like Neanderthals and Denisovans, H. floresiensis went extinct suspiciously soon after H. sapiens entered the region.