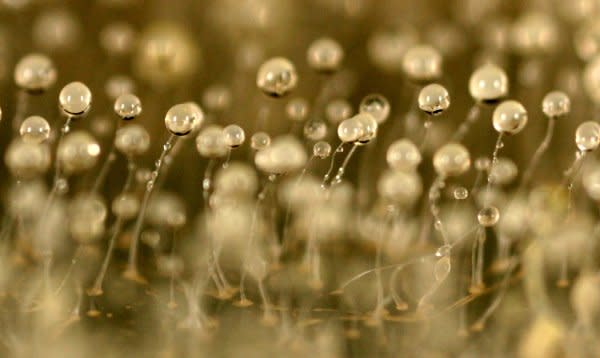 Meet the world’s smallest farmer – a “social amoeba” that seeds new land with bacteria, which it then eats. Just as human farmers carry seeds and livestock when they move to new areas, the amoeba can prepare for harsh conditions by bringing a ready food supply with it. It joins ants, termites and humans on the list of creatures that practice agriculture. The amoeba, Dictyostelium discoideum, is also known as a slime mould, but scientists who work with it sometimes use the more affectionate name of Dicty. Dicty spends most of its time as a single cell, oozing through the undergrowth in search of bacteria to eat. When they run out of prey, the amoebas unite to form a many-celled mobile slug. When the slug finds a good spot, it stretches upwards to form a ball at the end of a stalk. The ball is loaded with spores, which eventually blow free on the wind. When they land, they hatch into new amoebae and the life cycle begins again. Scientists pieced together Dicty’s life cycle decades ago, but it still carries surprises. Debra Brock from Rice University captured 35 wild amoebas from Virginia and Minnesota and found that a third of them carried bacteria in their slugs and spores. The bacteria hail from a number of different species, and half of these are found on Dicty’s menu. When the spores land in new locations, their bacterial cargo start to multiply, which provides the amoebae with food. When Brock scattered spores in a sterile dish, she found that the “farmers” fared better. By seeding the dish with their bacterial cargo, they had a ready source of food. If the spores didn’t have any bacteria, the amoebae hatched to find a famine awaiting them. Very few completed their life cycle. Sterile soils may be rare in nature, but Brock found that the farmers kept their advantage when they landed in soil that had the wrong kind of bacteria. Dicty is a fussy eater, so it pays for it to carry around its preferred morsels. This is a more passive style of farming than ants, termites or humans. Dicty doesn’t actually do anything to grow its bacteria, short of taking it to the right place. By contrast, ants and termites grow fungi by keeping it in just the right conditions, feeding it with leaves, and pruning away weed. Humans do the same for the crops that they farm. There are, however, many similarities between the amoebae and the ants. Both are social species that spend a lot of time around their close relatives. For the amoeba farmers, this is important. If family (actually, clones) didn’t stick close together, then non-farmers could easily eat the leftover bacteria, or freeload off the ones that are cultivated by the travelling spores. By sticking together, they ensure that their descendants (who share the same genes) reap the benefits of their prudence. Brock found that the farmers aren’t a special offshoot of Dicty’s family tree; they aren’t more closely related to each other than they are to other amoebae. But they are special. When Brock disinfected all the amoebae with antibiotics, only the former farmers could pick up new bacteria. But if the bacteria are so beneficial, why is it that only a third of the amoebae carry them? Brock got the answer when she scattered spores in a dish that was full of bacteria. With such bountiful meals everywhere, the farmers actually did worse. They were less likely to complete their life cycle than non-farmers. Brock thinks that these farmers were suffering because of their prior prudence. Dicty only forms spores once it exhausts its supply of bacteria. To bring bacteria along, it needs to stop eating before its food is finished, saving some for later while their peers clean their plates. If they land somewhere without much food, their disadvantage fades into irrelevance because only they can cultivate more meals. If they land in a place with bountiful meals, their weaker condition proves to be their downfall. For the amoebas, agriculture can be a double-edged sword. In other cases of animal agriculture, the farmer and the crop have come to depend on one another. Some types of fungus only exist because they are farmed by ants, and some damselfishes tend to gardens of unique algae, which don’t have any free-living relatives. By contrast, Dicty has a far more distant connection to its ‘crop’ – most amoebae aren’t farmers, and the bacteria can grow quite happily on their own. This is probably because the amoebae cultivate a wide variety of bacteria. From a bacterium’s point of view, the risk of being eaten by Dicty is only worth taking if its cousins (carrying the same genes) can hitchhike to new areas. If many species of bacteria go along for the ride, these benefits are diluted. Since Dicty plays host to a wide variety of bacteria, there’s little impetus for any individual species to evolve in tandem with it. For now, no one knows how long Dicty has been farming for. To find out, Brock will have to look at a diverse range of other amoebas and slime moulds to see if they also carry bacteria in their spores. If they do, then the practice is very old indeed. Dicty belongs to an ancient group of living things that sit next to animals and fungi on the tree of life. Their ancestors were among the first creatures to invade the land. If they have been cultivating bacteria for all that time, they would be the planet’s earliest farmers. Reference: Brock, Douglas, Queller & Strassmann. 2011. Primitive agriculture in a social amoeba. Nature http://dx.doi.org/10.1038/nature09668More on slime moulds: