Around 520 million years ago, a walking cactus roamed the Earth. Its body had nine segments, each bearing a pair of armour-plated legs, covered in thorns. It was an animal, but one that looked more like the concoction of a bad fantasy artist. Jianni Liu from Northwest University in Xi’an discovered this bundle of spines and named it Dianiacactiformis – the “walking cactus from Yunnan”. And she thinks that it sits at the roots of the most successful group of animals on the planet. If Liu is right, Diania is one of the earliest relatives of the arthropods – the group that includes insects, spiders, crabs, and more. These species all share a segmented body, a hard external skeleton and jointed legs. They are life’s winners, the most diverse of all animal groups. To understand what made them so special, we need to look at where they came from. “Delving around the roots of arthropods might help us understand drivers of their current huge biodiversity,” says Michael Benton from the University of Bristol.For a start, how did they evolve from soft-bodied worm-like creatures into the armoured, legged animals we know today? Diania might help to provide some answers. If Liu is right, it was an animal that was “close to the point of becoming a true arthropod”. Liu found several specimens of Diania in a famous fossil site at Chengjiang, China. The fossils have spent half a billion years underground, but three of them are still beautifully preserved.

Its trunk was a six-centimetre-long cylinder consisting of an odd, wrinkled head, followed by nine segments (it’s facing left in the reconstruction). Each segment was topped with a hard disc and separated from the next by spiny rings. Sprouting from the trunk were ten large armoured ‘legs’, covered in thorns and ending in two spines. “We think that the spines could have protected Diania against predators,” says Liu. “[And] although we don't know for sure what Diania ate, it's possible that the spines also helped it to grab and hold onto prey.” Each leg consisted of 16 hardened segments, and Liu thinks that the gaps between each of these probably acted as primitive joints. The ones at the front stuck out at a forward angle and Diania might have used them for grasping and feeding. Those at the back stuck out to the side and they were probably classical legs, used for walking.

is a lobopodian, a group of animals that look like “worms with legs”. They may have given rise to the arthropods themselves, as well as other fascinating animals like the glue-spitting velvet worms and the toughest animals alive – the tardigrades. Liu compared Diania to other fossil arthropods and lobopodians to create a family tree that links the groups together. Based on her tree, she thinks that Diania is an early cousin of the arthropods, which branched away at the very bottom of their dynasty. If she’s right, it suggests that these animals evolved armoured legs before armoured bodies. But that’s not certain. Even though the Diania specimens are well-preserved, they are still frustratingly enigmatic. Their heads are hard to make out and it’s difficult to say for sure if the legs really were armoured. “We accept that are some uncertainties about the exact position of Diania,” says Liu. “The basic problem is that there are a whole series of interesting Cambrian fossils which show some (but not all) of the features seen in modern arthropods. Diania, for example, has jointed legs, which is a very important arthropod character (and we would argue themost important character). Other fossils living about 500 million years ago show things like heads, eyes or gills; features we don't see in Diania. We don't yet know in which order all these different body parts evolved, and we very much hope that future fossil discoveries will help to clarify Diania's position.” This uncertainty isn’t uncommon. “The Chengjiang locality is famous and well-established of course for its remarkable fossils, but many have been debated,” says Benton. Take the aptly named Hallucigenia, another lobopodian from the Cambrian period, which was discovered at the Chengjiang site. When it was discovered, it was so bizarre that no one knew which way was up or which end was the front. Simon Conway Morris thought that it walked on long spines and fed with raised tentacles. Now we know that Morris got the animal upside-down. It walked on the stilt-like, claw-tipped legs (formerly the tentacles) and has long spikes sticking out of its back (formerly the legs). Diania continues Hallucigenia’s tradition of tantalising confusion.As Benton says, “These are remarkable fossils of another outrageous Cambrian organism, but as ever it appears to raise as many questions as it solves!” Reference: Liu, Steiner, Dunlop, Keupp, Shu, Ou, Han & Zhang. 2011. An armoured Cambrian lobopodian from China with arthropod-like appendages. Nature http://dx.doi.org/10.1038/nature09704More on lobopodians and odd Cambrian animals: 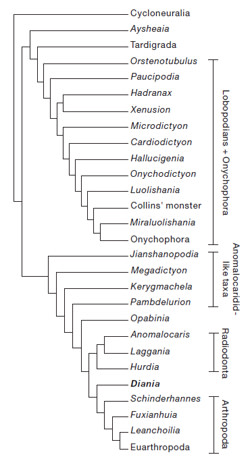