Microscopic remnants point to the consumption of pork, mutton and wheat. 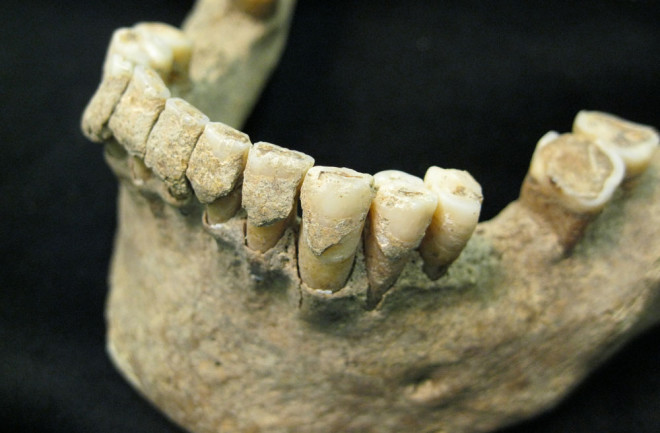 Fossilized dental calculi coat the teeth of a jaw dating back to about A.D. 1100, found at a medieval site in Dalheim, Germany. | Christina Warriner

Let plaque sit on your teeth, and it will harden into dental calculus, the stuff your dental hygienist has to remove with a metal pick. But that crusty, calcified gunk actually preserves a wealth of dietary information, according to researchers studying four medieval skeletons from western Germany.

The University of Oklahoma’s Christina Warinner and colleagues retrieved the genetic code of millions of microorganisms in the plaque, allowing them to determine what the person chewed or coughed up. They found thousands of bacteria species preserved in a rock-hard matrix of calcium.

The data, published in February, provide a snapshot of the medieval mouth — and more. “Calculi give you a window into health, diet and dynamic interactions with microbes,” Warinner says.

Certain dietary staples haven’t changed much, it seems. The plaque yielded pork and mutton biomolecules, along with wheat and microscopic remnants of a cabbage-like plant. “Some things, it turns out, are remarkably stable over time,” Warinner says.