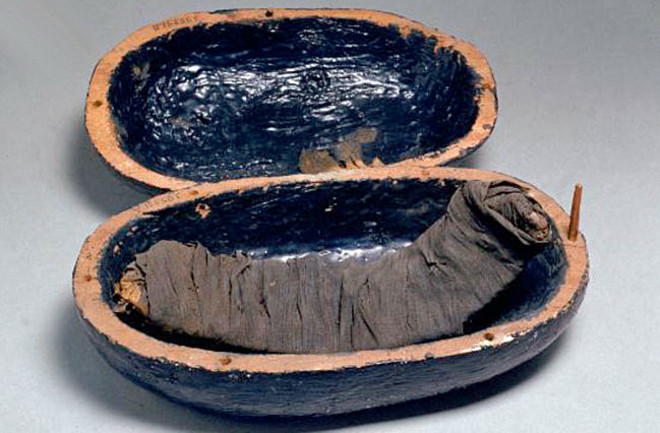 Beef rib meat mummy from the tomb of Yuya and Tjuiu (1386-1349 BC). Courtesy PNAS. There's loving meat... And then there's being buried with it. Scientists have known for years that ancient Egyptian tombs contained mummified meat, but now they know how these foodstuffs were preserved---in some cases, more painstakingly preserved than even human mummies. This comes from a new analysis of some beef ribs that were buried alongside one elite Egyptian couple, just one example of embalmed food offerings ancient Egyptians added to tombs, scientists report. A chemical analysis of the mummification balm used on the beef ribs indicates that it is the highest-status balm discovered to date.

Researchers from the University of Bristol and American University in Cairo tested four mummified foodstuffs from the Cairo Museum and British Museum. They compared the chemical compositions of the balms on the foodstuffs with those of known balms used on human and animal mummies, and found that preparations varied over time. One sample they analyzed was a calf mummy from the tomb of Isetemkheb D of the 21st Dynasty, circa 1070 to 845 B.C. The mummified calf had a mixture of fatty acids on the external bandages, but none of which came into contact with the meat itself. This animal fat, therefore, likely was a balm used to preserve the mummy.

In contrast, the beef rib mummy was preserved more elaborately. The rib meat is from the tomb of Yuya and Tjuiu---the parents of Queen Tiye---who lived from 1386 to 1349 B.C. The meat was prepared as if for eating, then wrapped up and embalmed. It's the balm that is surprising: a mixture of fat or oil, beeswax, and Pistacia resin, a very valuable plant resin rarely found in human mummification. The resin most likely came from trees such as the mastic gum or Chios turpentine, which historically have been used for preservation. It was considered a luxury item in ancient Egypt and might have been added to food to give it a particular flavor, the researchers report today in the Proceedings of the National Academy of Sciences. So though our meat-heavy diets may be a modern innovation---our reverence for a good slab of beef apparently is not.