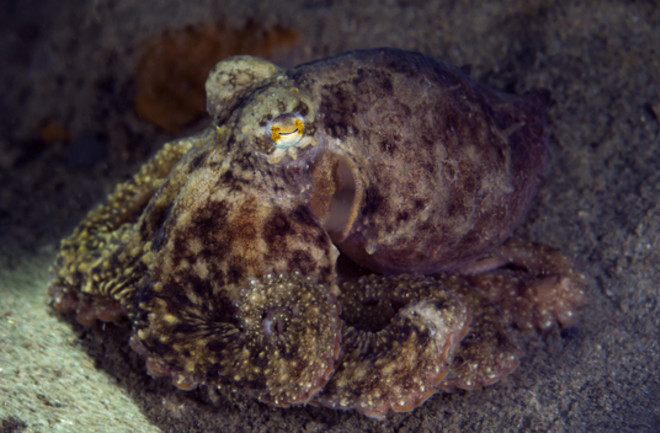 A neuroscientist and a marine biologist got together and decided to give octopuses MDMA. It sounds like a joke, but it really happened, and the results reveal something unique about our neurocircuitry and human evolution.

Eric Edsinger is an octopus researcher at the University of Chicago who recently helped sequence the genome of Octopus bimaculoides—the California two-spot octopus. Like most octopuses, this color-changing cephalopod is asocial, meaning it likes to be alone most of the time, unless it’s trying to mate.

But when given MDMA, a drug well known for boosting emotional empathy and prosocial behavior in humans (i.e. making you really, really want to fraternize), these octopuses also seemed to want to hang out with each other, even if they weren’t trying to find a mate.

This is interesting not only because these octopuses don’t normally behave this way, but also because the last common ancestor we shared was probably some wormlike thing between 500 and 750 million years ago. We’re pretty different from octopuses — in fact, by some estimates, these eight-legged freaks are the closest thing on Earth to an alien species. So it’s fairly intriguing to see that a drug works on them the same way it does on us.

According to the authors, these findings might tell us a lot about how “ancient neurotransmitter systems are shared across vertebrate and invertebrate species.”

MDMA, or 3,4-Methylenedioxymethamphetamine, is what’s known as an entactogen, which means “touching from within.” In humans, a typical dose of 100mg will flood the brain with serotonin, norepinephrine, and dopamine, and then prevent their reabsorption in the body. These are neurotransmitters related to emotional processing and social behavior.

Humans evolved serotonin transporters thanks to a gene called SLC6A4, and the theory is that this gene may be connected to the evolution of prosocial behavior. Edsinger teamed up with neuroscientist Gül Dölen at Johns Hopkins University and together they ran through the genomes of 21 different species to see if the gene would show up anywhere else. Their findings are published on the preprint repository bioRxiv (meaning they haven’t been peer-reviewed yet).

As expected, the gene popped up in all the vertebrates they tested, but also in fruit flies, a species of worm, a squid, and the octopus in question. (Surprisingly, the researchers didn’t find SLC6A4 in the very social hymenopteran insects, such as honeybees and leaf cutter ants, which suggests these bugs evolved social instincts in totally different way.)

Motivated by these results, the researchers constructed an experiment based on a common test for rodents. First, they put an octopus in a tank with three equal-sized chambers. In one chamber was an object, the other had another octopus, and the last one was empty. The animals were monitored for 30 minutes and the researchers confirmed that the males focused their attentions only on the females while shunning other males.

Then, after waiting several hours, they soaked the octopuses in a MDMA bath for 10 minutes, washed them off with saline, then returned them to the partitioned tank for 30 minutes. This time, the scientists noticed a clear difference.

After a dose of MDMA, the octopuses spent much more time with other octopuses, of both sexes, than before. This is markedly unusual behavior for the creatures, who normally stick to themselves, and the researchers suggest it could be because social behavior that’s normally suppressed was being expressed. They were also observed making “slow, voluntary, non-stereotypical, semi-purposeful movements” after being marinated in MDMA, something the researchers think might also be an example of normally repressed behavior coming out. Octopuses are deeply weird creatures with very different nervous systems than us: They’ve got more neurons in their arms than in their brains and can even edit their own genes to some extent. And, again, they’re so far from us evolutionarily that any commonalities are either very deeply rooted or the result of convergent evolution, meaning that we both evolved the same trait separately. Learning more about what we have in common with these cephalopods may tell us about our own deep history.

Given the results of their study, the authors suggest that octopuses might be good models for future drug studies. But the prospect of dosing octopuses, intelligent and complex beings, with drugs may raise concerns as well. Octopuses are the only invertebrates granted special protections meant to protect them from pain and injury in research, and because this area of research is so new, researchers still can’t say whether giving drugs to cephalopods will cause them harm or not.

Where do you get pharmaceutical grade MDMA, anyway? In this case, it was a gift from Rick Doblin, founder of the Multidisciplinary Association For Psychedelic Studies. MAPS is notably studying the drug’s potential in treating PTSD, so while MDMA is best known as a party narcotic, it may also have medical potential. The FDA has even granted special “breakthrough” status for MDMA-assisted psychotherapy for PTSD, which has entered phase 3 trials.

But this octopus research suggests that the popular drug known as “ecstasy” might also help us plumb the origins of our central nervous system and the fascinating evolution of one of the most bizarre, intelligent creatures in the ocean.