Mating with the wrong species: plastics make it possible

Despite only being around for the past century or so, plastics have become ubiquitous in modern life and for good reason: the final product is incredibly versatile. From grocery bags to IV bags to the teflon on non-stick pans, plastics really do make almost everything possible. But, such a useful product comes at a cost. One of the chemicals used in making certain plastics, BPA, has been linked to a suite of ecological and human health problems. Now, scientists have discovered that the effects of BPA are so strong, certain species of fish lose their ability to tell their own species apart from another. BPA is the building block of polycarbonate plastics, and is used in other kinds of plastics alter their flexibility. The trouble is, BPA doesn't stay neatly locked in - it's known to leech out, contaminating food and liquids that come in contact with BPA containing plastics. Studies have shown that BPA is now in our lakes and rivers, affecting all kinds of creatures that rely on those water sources. The real trouble with BPA is that it looks a lot like one of the most potent animal hormones: estrogen. It tricks animal cells. Because estrogen controls a number of very important bodily functions, the potential affects of BPA on animals - including us - are severe and range widely. In animals like mice and rats, doses as low as 0.025 µg/kg/day can causes permanent changes to the genital tract and predispose breast cells to cancerous activity. Between 1 and 30 µg/kg/day can lead to long-term reproductive changes like earlier puberty and longer periods, decline in testicular testosterone, and prostate cell changes indicative of cancer, as well as behavioral effects like decreased maternal instincts and even reversed sex roles. Jessica Ward and her colleagues were particularly concerned with how BPA is affecting fish in contaminated waters. In Georgia waters, an introduced species of fish - the red shiner (Cyprinella lutrensis) - is encroaching upon the habitat of a native species, the blacktail shiner (Cyprinella venusta). To determine the short term effects of BPA exposure on these two species, the research team placed male and female fish in BPA and control treatments for two weeks, then looked for physical and behavioral changes. 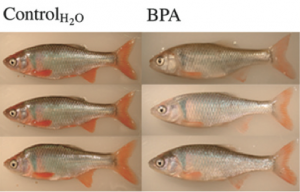 Males that were exposed to BPA changed color, losing some of their distinctive coloring that females use in mate choice (image from the paper on the right). This loss of color affected the females' behavior: they were less choosy when it came to their mates. Exposure to BPA led to more mixed-species pairings. "This can have severe ecological and evolutionary consequences," said Ward, "including the potential for the decline of our native species." Already, hybridization with red shiners is altering the community composition of native shiners in southern waterways and facilitating the invasion. With BPA and other hormone-mimicking pollutants speeding up the process of invasion, our native species are in for the fight of their life. While we knew BPA was a problem, this is one of the first studies to reveal how broad its effects really are. "Until now studies have primarily focused on the impact to individual fish, but our study demonstrates the impact of BPA on a population level," said Ward. Additional studies like this one on other species, from insects to mammals, will help us better understand how BPA and other hormone-mimicking chemicals are affecting our ecosystems. Given the dire situation many of our ecosystems currently face, such knowledge is vital in the effort to protect what biodiversity we have left for further generations.

The SciencesWhat Gives Your Favorite Whiskey Its Unique Flavor?
Recommendations From Our Store