Even some of the most well-known monogamous animals are not as sexually loyal as we once thought. 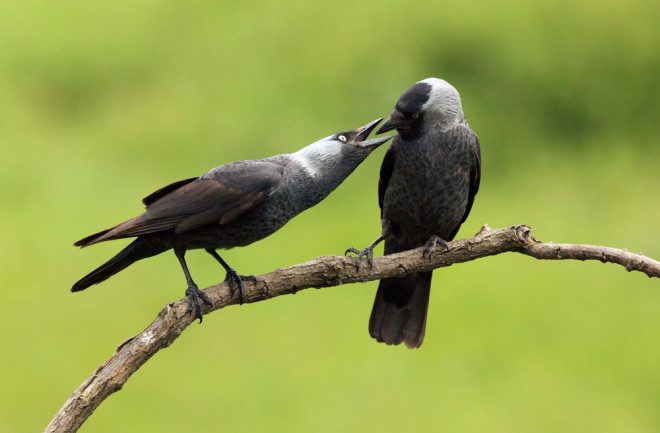 Jackdaws were once thought to be sexually monogamous, but research shows they often have offspring with other birds besides their main partner. (Credit: Karel Bartik/Shutterstock)

Stories of monogamous animals have a way of melting human hearts. You may have heard about lifelong swan partners, or watched the documentary March of the Penguins and shed some tears over the committed parents risking it all for their yet-to-hatch chicks. But monogamy in the animal kingdom is more circumstantial, complicated and often promiscuous than the standards we have for ourselves.

For starters, there are several different types of monogamy found among species in the wild. Sometimes couples can be temporary, or the environment might influence an animal’s drive to pair up. Ongoing research is also revealing that some pairs aren't as exclusive as we once thought.

When animal researchers use the term social monogamy, “it doesn’t require fidelity,” says Rebecca Young, an evolutionary biologist at the University of Texas at Austin. It typically refers to a pair bond between two animals that are defending resources, such as shelter and food, and jointly caring for their offspring. That bond often spans only one mating season, such as the case with emperor penguins in Antarctica.

Even among the animals best known for having life partners — such as birds — it turns out sex with additional partners occurs more often than not. Despite a long-standing estimate that 90 percent of birds are monogamous, a 2008 report in Molecular Ecology found that nine out of 10 bird species also have offspring with partners who are not their primary mate. Take the jackdaw as an example. In 2017, researchers placed video cameras and microphones inside nesting boxes during mating season to observe the songbird, lauded for years as a strictly monogamous species. That fieldwork revealed dozens of extra-pair sexual encounters, leading the authors to challenge the long-held belief that the jackdaw is sexually monogamous, according to a 2019 study in Behavioral Ecology. Similar studies have cropped up with numerous species as animal researchers take a closer look at their behavior.

Today, urban coyotes remain one of the most compelling beacons of strict monogamy in mammals. Wildlife ecologist Cecilia Hennessy and colleagues in 2012 reported exclusive partnership in 236 coyotes that were genetically sampled over a six-year period in the Chicago area. "As far as I could discern, coyotes were monogamous for life," Hennessy says.

The study results reported no examples of cheating between exclusive pairs. Hennessy and the team suggested the mating behavior is key to the animals’ success in urban areas, partially because it requires that male coyotes help their partners care for pups and ensure their survival. But Hennessy still says that "this behavior may be variable in different habitats."

Genetic monogamy has also been reported in three other mammal species: the California mouse, Kirk’s dik-dik and the Malagasy giant jumping rat, according to a 2014 study in Proceedings of the Royal Society B.

While examples of committed mates for life exist, such as the Chicago coyotes, actually pinning down a species that is consistently genetically monogamous, or absolutely monogamous, is nearly impossible, Young says. For starters, environmental conditions, which are always in flux, often play a significant influence on mating systems and habits. “It helps in certain ecological conditions to have monogamous pair bonding,” Young says, and yet “there are some conditions where being a wanderer is actually better.”

Plus, the limited ability to observe behavior across all animals within a species will always be a hurdle to definitive answers about monogamy, and many of science’s big questions. “The absence of evidence is not evidence of absence,” Young says.