A Trelleborg style Viking fortress is discovered in rural Denmark. 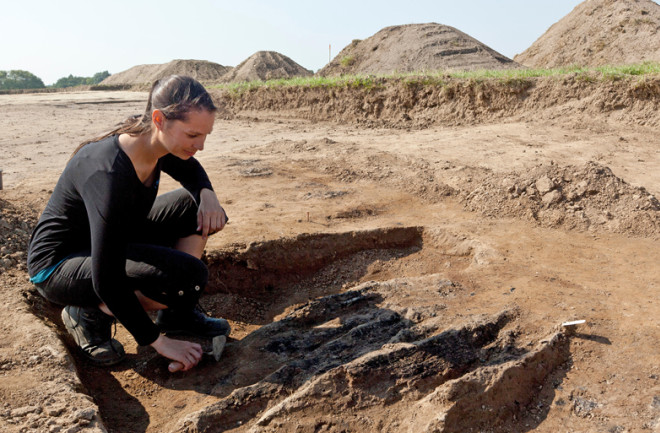 Nanna Holm, curator of the Danish Castle Center, identified the charred remains of wooden posts and postholes during a partial excavation of the Vall fortress last summer. The artifacts were dated to the 10th century, about the time Denmark became unified. | OJPHOTOS/Alamy Live News

For centuries, a ripple of land in a farmer’s field about 35 miles southwest of Copenhagen, Denmark, attracted little attention.

“We knew there was something out there, but we thought it was Iron Age, 800 years before the Vikings, so nobody was interested in it,” says Nanna Holm, curator of the Danish Castle Center.

But Holm became curious about the site in rural Vallø when she came across new, more precise topography maps, which the Danish government created in 2009 and issued in 2012. She noticed that the new maps, created to identify areas at increased risk for flooding due to climate change, put subtle landscape variations into sharper focus.

A 2009 map, made by using lasers to measure subtle differences in elevation, reveals the circular shape of the fort (circled in red). | Danish Castle Center/Aarhus University

What she saw — confirmed during a partial excavation last summer — was the outline of a massive Viking-era fortress. Measuring 475 feet in diameter, the fortress is perfectly circular, with four gates aligned to the four compass points — a uniquely Viking-age Danish style called Trelleborg. It’s the first new Viking fortress discovered in more than 60 years.

In September, researchers dated the fortress to the 10th century, likely during the reign of Harald Bluetooth, the first king of a united Denmark. Details of that unification remain murky.

“New technologies mean new possibilities to answer old questions,” says Holm. “Something happened during Harald’s reign that created Denmark. We don’t know how the state was created, but this fortress may help us answer that.”