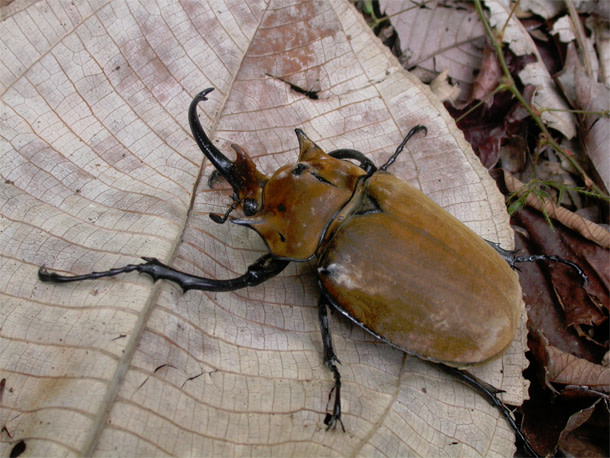 is around the size of Manhattan. For two years, this small area was host to 102 scientists, working together to count everything that crept and crawled. They came from 17 countries, and converged upon a half-hectare of the forest, about the size of half a rugby pitch. They dug into the soil, and ascended into the 40-metre-tall treetops with ropes, balloons, and a giant crane. They unleashed fogs, set up sticky traps, and hacked into pieces of wood. Together, they were part of the largest ever systematic attempt to answer a disarmingly simple question: in a patch of tropical rainforest, how many species of insects and other arthropods are there? After collecting the critters in 2003 and 2004, and analysing the material for eight years, they got an answer: 6,144 species in that patch of forest. Using computer simulations to scale that up, they estimate that the entire 6,000-hectare Manhattan-sized forest is home to around 25,000 arthropod species. It’s the first solid estimate of its kind, and it reveals a surprising trend: every hectare of the forest contains almost two-thirds (64 percent) of all the arthropod species in the whole area. “That doesn’t mean that if you cut the forest to just one half-hectare, all those species can exist,” cautions Yves Basset

from the Smithsonian Tropical Research Institute, who led the study. “But it’s good news. It suggests that if we do a good job of collecting species in small plots, from soil to canopy, we can get a surprising proportion of what’s in the whole forest.” Arthropods are animals that are covered in a hard external skeleton and walk on jointed legs. They include the insects, arachnids like spiders and scorpions, millipedes and centipedes, and much more. Pick a land animal randomly, and chances are it’ll be an arthropod. But how many are there? That’s not an easy question. By their nature, arthropods are small but numerous. Some groups like ants and butterflies are well-studied, but we don’t have good data for more obscure members, which require special techniques, and even more specially trained scientists. The tropical rainforest, undoubtedly the richest of the planet’s arthropod hubs, poses an extra challenge: it’s very tall. The forest is like a gigantic cake, with each layer having its own character. The residents of the soil are very different from those in the canopy, and the latter is very hard to reach. Sure, you can climb, but if you wanted to do a survey, you need to reach the tops of many trees, and work there for hours. The team solved that problem with a Canopy Raft

, an inflatable platform shaped like a giant Venn diagram, which can be lowered onto the treetops via blimp. It’s light enough to avoid damaging the trees, and allows scientists to work in the canopy for days at a time

to lift and lower the researchers into spots of their choosing, along with more traditional tree-houses, helium balloons, and tree-climbing gear 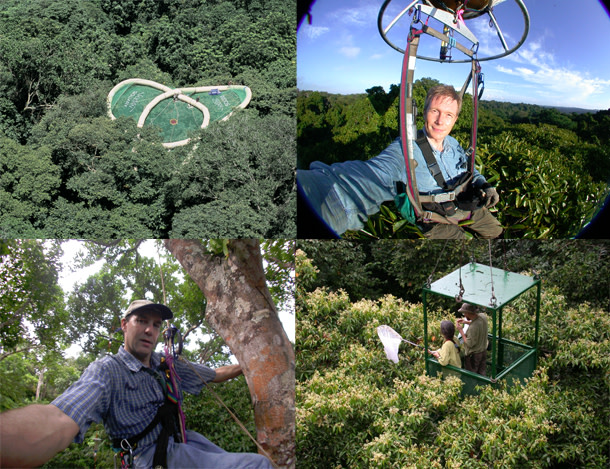 Besides gathering equipment, Basset and the other project leaders also gathered expertise. They congregated a huge team of colleagues, each with their own speciality. Basset himself focused on leafhoppers

. Others specialised on flies, or crickets. There were four separate categories of beetle experts, who focused on the hunting, scavenging, plant-eating, and fungus-eating species. “We needed all these people because the methods for studying these groups aren’t the same,” says Basset. “You cannot get a good estimate unless you have all these experts working together.” Experts like this often work in the same field site, but rarely do they coordinate their efforts. They worked as a team, using 14 different techniques

to scour the forests for arthropods. They released insecticide fogs into the trees and collected whatever fell to earth. They used light-traps to lure insects at night. They dug pit traps. They laid pieces of wood as bait, waited for insects to lay their eggs inside, and then reared the eggs in cages to see what hatched. They walked along the forest, breaking into every stray piece of wood in search for termites. After all that effort, the team arrived at a count of 6,144, and used computer models to expand that figure to the entire forest. They used well-studied groups to check their figures and “ground-truth” their models, and eventually predicted that San Lorenzo is home to around 25,000 arthropod species. The most likely minimum is 22,000, and the full range of possible figures extends from 18,000 to 44,000. Of these, Basset expects that a few thousand were new to science, but it’s hard to say exactly—collected species often languish for decades before being described, so these “new” species might have already been “discovered” elsewhere. For now, the team’s data have shown that the richness of arthropods was strongly related to the diversity of plants in any given part of the forest. For every plant species, there are around 20 arthropod ones, and if you know the former, you can predict the latter to within 1 percent accuracy. There are also ties between arthropods and other animals groups. For every bird or mammal species, you can expect 71 and 270 arthropod species respectively. “Again, this is good news,” says Basset. “It’s very difficult to collect arthropods, but far easier to have a good estimate how many tree species there are.” While some scientists have used plants to estimate arthropod diversity before, the assumption that these were accurately linked had never been thoroughly tested. “Our collections suggest that there is a good correlation,” says Basset. This means that a recent estimate of 6.1 million arthropod species

around the world is probably about right. Or, in the team’s words, “does not require drastic correction”. Of course, this study only applies to a small forest in Panama. It’s not a standard for tropical rainforests, nor was it meant to be. “But the methods could set up a standard,” says Basset. The team is already starting to run similar studies in Vanuatu, Australia and Papua New Guinea, using the same template. And Basset expects that an even wider selection of arthropods lives in the heart of the Amazon, or the jungles of South-East Asia. Reference: Basset, Cizek, Cuénoud, Didham, Guilhaumon, Missa, Novotny, Ødegaard, Roslin, Schmidl, Tishechkin, Winchester, Roubik, Aberlenc, Bail, Barrios, Bridle, Castaño-Meneses, Corbara, Curletti, da Rocha, De Bakker, Delabie, Dejean, Fagan, Floren, Kitching, Medianero, Miller, de Oliveira, Orivel, Pollet, Rapp, Ribeiro, Roisin, Schmidt, Sørensen & Leponce. 2012. Arthropod Diversity in a Tropical Forest. Science http://dx.doi.org/10.1126/science.1226727