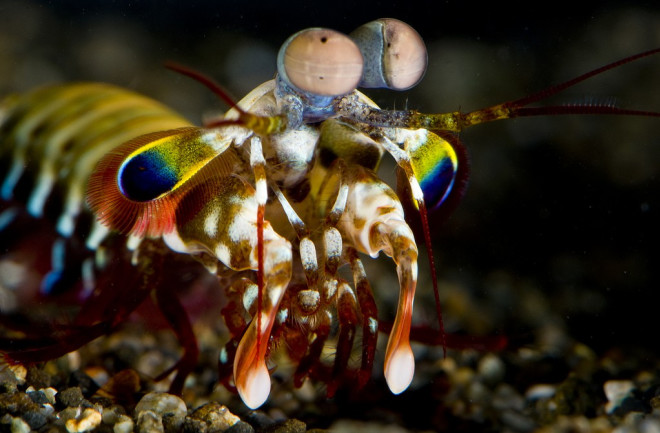 Mantis shrimp have a type of vision unlike any other animal on the planet ⁠— that much was known. But now scientists have determined, at a cellular level, how it is that these foot-long crustaceans see the world. And it stems from their unique photoreceptors.

In general, photoreceptors absorb light and convert it into electrical signals, which are then sent to the brain for interpretation. Each photoreceptor is specific to a particular wavelength of light, which the brain translates into a color. Your dog has two kinds of photoreceptors: blue and green. You have three: blue, green and red. Our eyes can see these colors and every combination or variation thereof.

The researchers say it's because mantis shrimp photoreceptors work in a unique way, completely unlike like the rest of ours. Researchers reached this conclusion after playing a reward game with mantis shrimp.

They would shine two different colored lights simultaneously at the shrimp. Pinching their claws at the source of one color, let's say yellow, would result in the shrimp getting a treat. Choosing the blue one meant no treat. This drill was repeated until the shrimp learned to pick the yellow light and were able to do so consistently.

Then the researchers began to switch the other colors up, making the shrimp choose between red and yellow, then orange and yellow, etc. Surprisingly, when the colors got too close to one another (i.e. yellow and a shade of orange akin to macaroni and cheese) the shrimp couldn't tell them apart. Even with their 12 kinds of photoreceptors, shrimp could only distinguish colors on the light spectrum that were at least 25 nanometers apart.

By comparison, humans, with a measly three kinds of photoreceptors, can distinguish colors separated by as little as one nanometer.

From this the researchers deduced that the mantis shrimp's whole visual system operates differently than our own. As they describe in their paper published in Science today, further investigation showed that shrimp don't take the time to send visual information to the brain and wait for it to distinguish between subtle color differences like we do. The shrimp just skips over this step altogether.

Each of the shrimp's 12 photoreceptors is essentially set to a different sensitivity. Their eyes scan a scene and are able to instantly recognize when something falls into its reddish category, without having to ask their brain if it's seeing brick red or scarlet. In the colorful and fast-paced circus that is its coral reef home, avoiding that little bit of a processing delay could be the difference between life and death, even for a foot-long crustacean.

The same goes for their dinner. This unique kind of vision could be a mantis shrimp's hidden weapon in capturing prey ⁠— well, alongside its ability to swing its front claws at the speed of a .22 caliber bullet to bludgeon, spear or dismember an unwitting victim.

If you want to gaze deep into these crazy eyes (not to mention witnessing a mantis shrimp's eye-grooming techniques!) check out this video. Dramatic mood music included.