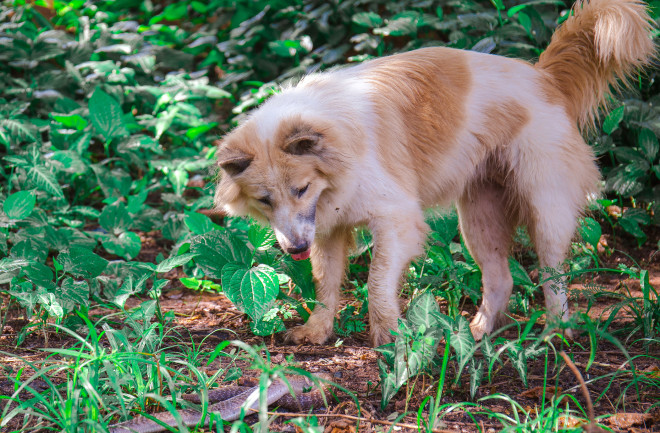 Dogs' lack of fear might explain why they're so at risk of life-threatening snakebites. Photo Credit: Nantawit Chuchue/Shutterstock If you feel your stomach flutter uncomfortably at the mere image of a slithering serpent, you're not alone. It's thought that snakes make about half of us anxious, and 2-3% of people are Ophidiophobic—that is, they're deeply afraid of snakes. Such fear is thought to have deep roots; over the course of our evolutionary history, snakes are thought to have had such an influence on our risk of dying that we've evolved an innate fear of them, which has even influenced our visual acuity—an idea known as the Snake Detection Hypothesis. Whether we all really share an innate terror of snakes is still somewhat controversial, but the case is much clearer in dogs: our beloved canine companions simply aren't afraid of snakes, and that's probably part of the reason so dang many of them wind up in veterinary ERs for envenomations. The newest evidence comes from a paper in Applied Animal Behavior Science, which found that dogs can smell the difference between a venomous rattlesnake and a harmless boa, but they find the smell intriguing rather than terrifying. And that means they're more likely to investigate, putting themselves at risk of a dangerous bite. The researchers presented 171 dogs with bits of newspapers coated with the scents of southern Pacific rattlesnakes (Crotalus oreganus helleri), rosy boas (Lichanura trivirgata), mice (Mus musculus) or snails (Cornu aspersum), and recorded both how long the dogs sniffed them and what nostril they used to sniff with, as previous studies have found correlations between the nostril dogs use for smelling and fear.

Studies suggest dogs sniff scary things with their right nostril. Photo Credit: Robin D. Williams/Shutterstock Only the odor of mice was as interesting to the dogs as Eau de rattlesnake; they sniffed the rattlesnake papers significantly more than the ones smelling of boa or snail. But while they did that, there was no bias in the nostril used, even by animals that had been bitten by a rattlesnake before, which suggested the animals were interested but not afraid—or, as the authors phrased it, that they exhibited "investigatory interest without an accompanying experience of threat." That's similar to what a 1989 study concluded, and the authors suggest it "would help explain the anecdotal evidence that dogs are prone to approach and thus be bitten by rattlesnakes." In addition to owner stories, studies have found that most dogs bitten by rattlesnakes receive strikes to the face or neck, suggesting they approached the snake that bit them head on. But why dogs don't share our fear is less clear. It's not like they evolved apart from dangerous snakes—"Canids evolved in the presence of constricting and venomous snakes," the authors noted, "and their olfactory systems are extremely sensitive, making odors particularly well-suited to mediate threat detection." Of course, the presence of snakes doesn't mean that they are, or have always been, a significant danger. The authors note that if snakes weren't really a big threat to dogs or the wolves they evolved from, then there wouldn't have been a strong selection pressure to drive the evolution of an innate fear. They'd like to see if wolves behave the same way as the dogs they tested, to better gauge whether the lineage as a whole just doesn't really fear venomous snakes or if we've somehow bred the fear of snakes out of dogs during the process of domestication.

If wolves don't fear snake odors, that may suggest a lack of evolutionary importance of snakebite—or that the snakes have evolved a way of hiding their scent. Photo Credit: Holly Kuchera/Shutterstock If the wolves aren't afraid, that could mean that snakes just aren't a big threat. Or, it could be that the snake species tested may have actually evolved to smell less threatening—an idea the researchers refer to as "chemical crypsis." And there's some evidence for that—one 2015 study found that dogs could be only be trained to tell some snake species scents apart. The one in particular that gave them trouble was the puff adder, which—like southern Pacific rattlesnakes—is an ambush predator. A sit-and-strike hunting style wouldn't be too effective if your potential prey could smell you from a meter away, so it makes sense that these animals might have evolved a less identifiable odor (alternatively, snakes that don't move as much might just not produce as much smell). Either way, it seems pretty clear that dogs—even ones that have encountered or been bitten by rattlesnakes—don't really fear the toxic serpents. And that's unfortunate, because it's estimated that ~150,000 pets are bitten by rattlesnakes each year, and those bites are way more dangerous for them than they are for us. While North American snakebites are fatal less than 1% of the time in people, researchers estimate up to 30% of bitten dogs die from the experience. So as the summer approaches, be sure to keep a good eye on your pups as they explore the outdoors! Because the old adage about curiosity killing doesn't just apply to cats, and if anything, evolution seems to be working against dogs when it comes to the dangers posed by venomous snakes.