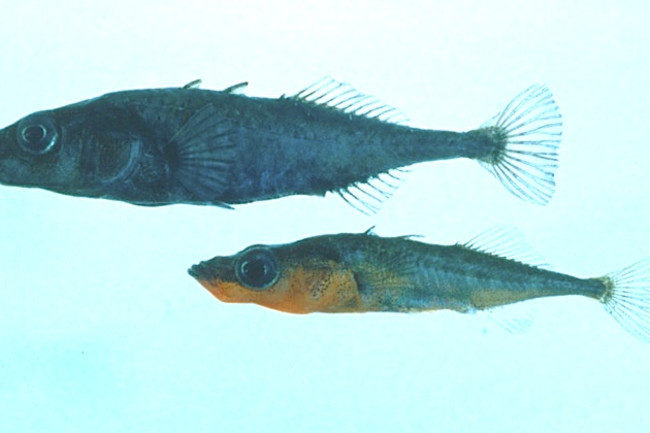 In tomorrow's New York Times I have an article about the origin of species--or rather, blocking the origin of species. The evolution of a new species can be a drawn out process, taking thousands or millions of years. First populations begin to diverge from each other. Later, those populations may become divided by significant reproductive barriers. Even after those populations have evolved into separate species, they may still be able to produce hybrids in the right conditions. In some cases, those hybrids may remain rare and the two species will remain intact. In other cases, the species may collapse back on each other. The article looks at two animals in which speciation appears to be going in reverse. One is three-spined sticklebacks, which have evolved into two easily distinguished different species in 11,000 years in six separate lakes in Canada. (The papers are here and here.) In one lake, an introduced crayfish appears to be driving the two species into a single hybrid swarm. The other example is Darwin's finches on the Galapagos (paper here). The medium ground finch has, on some islands, diverged into two forms, one with a big beak and one with a small one. But where they have come into contact with humans, they are blurring back into a single spectrum of beaks. Hybrids with average size beaks appear to be thriving because they can eat rice and other foods left by humans. As I mention in the article, Ole Seehausen, an expert on fish biodiversity, thinks these papers are hinting at a widespread pattern. In Current Biology (pdf here) he points out that much of the diversity on Earth consists of new species, rather than old ones. New species are fragile, and human activity may be able to drive them into hybrid swarms. Seehausen's own work on cichlids in Africa suggests that pollution in Lake Victoria is making it hard for the fish to recognize mates of their own species. It may seem odd to think of reverse speciation as a real threat to biodiversity. Knocking down a forest--that's easy to picture. But if the sticklebacks do become completely mixed in Lake Enos, there will still be sticklebacks in Lake Enos. It's just that where there were two species, one will be left. The real difficulty, I suspect, comes from thinking about biodiversity as an ongoing process. Even before humans, old species became extinct as new species gradually emerged. Now we are not just endangering old species but perhaps block new ones from evolving--cutting off biodiversity at both ends, in other words. I find it interesting to ponder this research in the wake of the hominid-ape hybrid research I wrote about last week. Our ancestors diverged from the ancestors of chimpanzees roughly six million years ago--very roughly according to recent studies that suggest millions of years of gradual separation, perhaps even with some hybridization after the lineages split. Scientists can only look back at that split by looking at the genomes of humans and other apes. But sticklebacks and Darwin's finches can offer some clues to that delicate process of parting ways. Update: Apologies to residents of Vancouver Island (home of the studied sticklebacks), which I wrongly identified as Victoria Island.