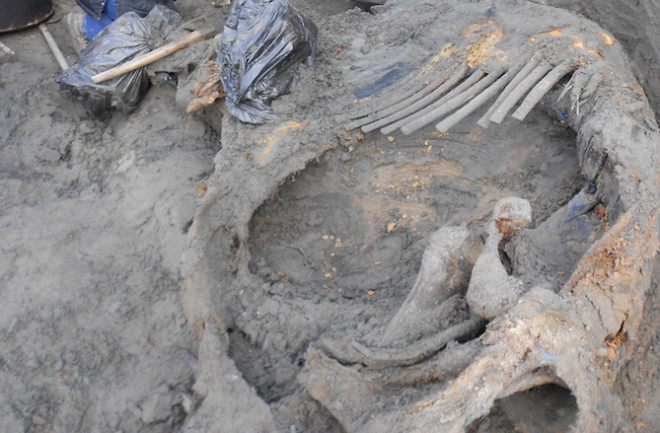 A member of the Russian Academy of Science team excavates the mammoth found in northern Siberia. (Credit: Pitulko et al./Science) It was clear that the mammoth died violently. A hole in the skull, cuts to the scapula and ribs, a broken mandible and a battered tusk all point to a struggle to the death with one or more adversaries. This particular mammoth, discovered 70 degrees north of the equator in northern Siberia and radiocarbon dated to around 45,000 years ago, could provide evidence that humans were active in the region 10,000 years earlier than previously thought. While humans had reached parts of Siberia as part of their exodus from Africa by this time, they were thought to have stopped around 55 degrees north, about as far north as Denmark.

Mammoths were a treasure trove for early hunters, who would use the hairy beasts' ivory for tools and their meat and fat for cooking and fuel. “Mammoth tusks were the main target for them, providing raw materials to produce long points and full-size spears, becoming a substitute for wood that equipped spears with shafts,” Vladimir Pitulko, lead author of the study and a researcher with the Russian Academy of Sciences said in an interview with Discovery. “This is especially important for questions related to the peopling of the New World, because now we know that eastern Siberia up to its Arctic limits was populated starting at roughly 50,000 years ago,” he said. Pitulko and his colleagues excavated the almost fully intact mammoth back in 2012, and detailed their findings in a paper published Thursday in Science.

After analyzing the mammoth's wounds, the researchers concluded that it died as a result of injuries from human weapons and was then partially butchered. As evidence, they cited a puncture wound in the skull, likely caused by a spear, and cuts to the shoulder blade and ribs, indicative of a slashing attack with a spear or blade. Another, more powerful, blow to the shoulder blade ripped through skin and muscle and penetrated the bone, roughly at the shoulder height of an adult human. The researchers go on to say that the broken mandible serves as evidence that the tongue was removed after the mammoth died, and cuts in the tusk were likely the result of the hunters removing ivory for use as sharp tools in butchering the mammoth.

Image Credit: AuntSpray/Shutterstock The researchers corroborated their findings by comparing this mammoth to another one found at a site called Yana, which is dated to around 27,000 years ago. They say the marks on the tusk of the Siberian mammoth match marks found on the Yana mammoth tusks. They also cite the discovery of a wolf at a different site with what appears to be human-inflicted injuries, also dated to around 45,000 years ago.

While this mammoth presents a compelling case for the presence of ancient humans in the Arctic, no direct evidence has yet come to light. In order to prove their case, the researchers would need to find tools of stone or ivory, or better yet, a human skeleton. The lack of such evidence raises concerns for some researchers, who caution against jumping to conclusions. Dr. Robert Park, a professor in the anthropology department at the University of Waterloo in Canada, in an email to Discover, stated that this skeleton doesn’t quite match up with the activities of early hunters. “The most convincing evidence that it wasn’t butchered is the fact that the archaeologists recovered the mammoth’s fat hump,” Park stated. “Hunter-gatherers in high latitudes need fat both for its food value and as fuel. So the one part of the animal that we would not expect hunters to leave behind is fat.” The fact that the animal was found intact serves as evidence that it may not have been butchered. Hunters trying to salvage meat and fat from a dead mammoth would almost certainly need to tear it apart, Park believes. The mammoth could have, conceivably, been killed by Neanderthals who were still alive at the time, or by another species of human. Still, this find hints at the possibility that humans were near the Bering Strait land bridge, which connected Siberia to the Americas, much earlier than we thought. While no evidence of them crossing has been found, their presence in the area could mean that it was possible.