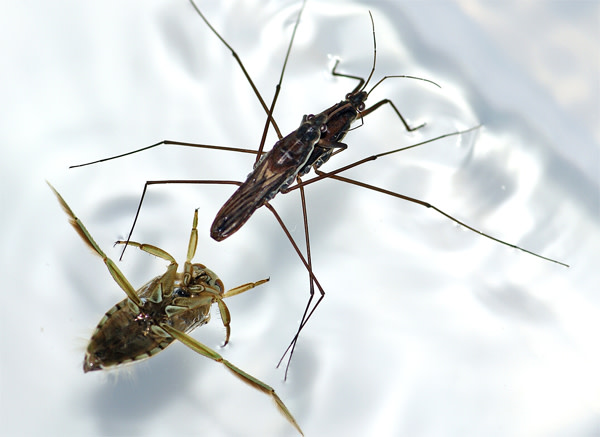 If you want to see some sex, violence and blackmail, don’t bother with soap operas – try looking at the surface of your local lake or stream. There, you’ll find small insects called water striders (or pond skaters), skimming across the water on outstretched legs. These legs can pick up the vibrations of prey, predators and mates, but they can also produce vibrations by tapping the water surface. And males use this ability to blackmail their way into sex. It’s a drama of sexual tension played out across the surface tension. Water strider sex begins unceremoniously: the male mounts the female without any courtship rituals or foreplay. She may resist but if she does, he starts to actively strum the water surface with his legs. Each vibration risks attracting the attention of a hungry predator, like a fish or backswimmer (above). And because the female is underneath, she will bear the brunt of any assault. By creating dangerous vibes, the male intimidates the female into submitting to his advances. Faint heart, it is said, never did win fair lady. A male water strider doesn’t have to go through the hardships of pregnancy and he plays no role in raising the next generation. It’s a theme that echoes throughout the animal kingdom and it means that the best strategy for him is to mate with as many females as possible. After all, he has plenty of sperm to go around. A female, however, has a limited supply of eggs and mating opportunities. When she has sex, it has to count, so it suits her to be choosy. And she has the right equipment for the job. Last year, Chang Han and Piotr Jablonski from Seoul National University found that female red-backed water striders (Gerris gracilicornis) can block their vaginas with hard genital shields. This defence is important because once the male manages to insert his penis, he can inflate it to make him harder to throw off. The female’s only hope is to prevent him from getting through in the first place. Hyper-violent males can sometimes wear the female down but some opt for a subtler approach – they tap intricate rhythms on the water with their legs. When Han and Jablonski discovered these rituals last year, they suggested that the males might be trying to demonstrate their quality, by tapping out the most consistent rhythms. Now, they have another explanation – the tapping is a form of blackmail, a way of coercing sex from the female with the threat of death. The duo studied the preferences of the backswimmer – a predatory bug that floats upside-down at the water’s surface and listens out for the vibrations of potential prey. When given a choice between a silent male water strider and a mating pair with a tapping male, the backswimmer always headed towards the vibrating duo. And since these predators attack from below, the female was always the one who was injured while the male strode off to tap another day. The backswimmer menace is so potent that after a few minutes of tapping from the male, the female relents by opening her genital shield. If she had been previously attacked by predators, she gave in almost instantly. And only when she relented did the male stop his threatening taps. But all of this changed when Han and Jablonski prevented the males from sending out their deadly summons by gluing a bar on the females’ backs. This stopped the males’ legs from touching the water and it made the females much less forthcoming. On average, they only gave in after 20 minutes and some held out for a full hour. Of course, it’s possible that the males tap the water for an entirely different reason, and the threat of predators is just a happy side-effect. But Han and Jablonski found that the males, particularly large ones, actually tap faster when backswimmers are around – they’re clearly trying to attract these predators. This predator-summoning strategy probably evolved from more innocuous behaviours. Water striders already tap their legs to communicate with each other during fights. And the males of another species, Aquarius najas, also tap their legs during sex but without causing harsh ripples and without affecting female resistance. It’s possible that these signals originated as a way of demonstrating male quality, as Han and Jablonski initially suggested, before they were co-opted for more sinister purposes. The battle of the sexes between male and female water striders has led to a whole suite of adaptations and counter-adaptations. Some males have evolved special grasping structures to give them a better hold of females, while females have responded by evolving spines and other defences to weaken their grip. Females evolved their impregnable genital shields, which males have countered with a behaviour that makes females more likely to lower their defences. To be honest, the female water strider has an easy time of it. In other insects, where females have evolved an upper hand in the war of the sexes, males have developed even more extreme counter-strategies. Look no further than the common bedbug – the male bypasses the female’s genitals altogether and stabs his sharp penis straight into the female’s back, a technique known appropriately as traumatic insemination. Reference: Nature Communications http://dx.doi.org/10.1038/ncomms1051Image by Chang S. Han More on insect sex: