The worst sex you have ever had pales in comparison to what female water striders have to put up with. Put it this way: you have never been held down by your eyes. As the female skates over the surface of ponds and lakes, males will try to force themselves upon her. She resists by struggling vigorously. But in some species, males can avoid being thrown off with antennae that have evolved into antler-shaped restraints. They bend in on themselves and are loaded with an array of prongs and spikes that perfectly fit to the shape of a female’s head. Locke Rowe from the University of Toronto has been studying water striders for almost 20 years. In many species, males have evolved structures that give them an edge in their indelicate liaisons with females. “But the traits I studied before were rather simple – a spine here or there,” says Rowe. The subject of his latest study, a species called Rheumatobates rileyi – is… well, the opposite of simple. [embed width="610"]http://youtu.be/DOgSIXQu06I[/embed] The females have normal antennae. The males however, have “spectacularly modified grasping devices”, says Rowe. “They’re large, muscular, and fitted with spines and spikes exquisitely adapted for grasping – a long way from an insect feeler.” Together with postdoc Abderrahman Khila and colleague Ehab Abouheif (remember the supersoldier ants?), Rowe has pieced together how the bizarre antennae work and how they evolved. They watched mating water striders using high-speed cameras and powerful electron microscopes. This voyeurism revealed that the male antennae have four structures for clinging onto struggling females. 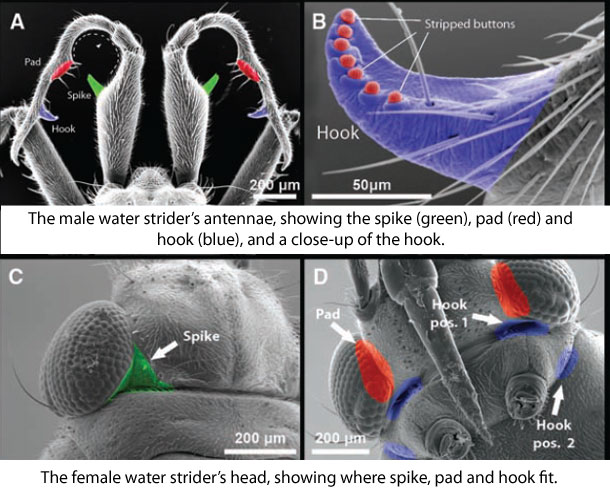 The fit between the male’s antennal adornments and the female’s head and body is uncannily precise. These special traits appear very late during the male’s development. For most of his larva-hood, his antennae look like chunkier versions of a female’s. It’s only during his final moult, when he sheds the skin of youth and transforms into an adult, that he gains the wrench, spike, pad and hook. To understand how the antennae evolved, Khila catalogued the genes that are activated in the antennae, as males and females approach adulthood. One gene drew their attention – distalless (dll), which helps to control the growth of insect limbs and bristles. Khila deactivated the dll gene before the water striders’ final moult, using a technique called RNA interference (RNAi). Females were unaffected, but the males lost many of their deluxe antennal features. In the most severe cases, their antennae were virtually indistinguishable from those of females. In milder cases, the special features were just smaller than usual. This is typical for RNAi – it has stronger effects in some individuals than others. But this gave the team the chance to test how essential the male’s features are. By pitting them against females, the team found that males with the most severe reductions were the worst suitors. They were more easily bucked off. The more elaborate the antennae, the more successful they were This is the first time that anyone has taken a trait that obviously differs between male and female animals, showed how that difference benefits one sex, and worked out the genes that cause that difference. It’s a tour de force set of experiments. It’s also a great example of how tiny changes to amass into impressive traits. Even a slightly more elaborate antenna makes a male better at fertilising a female. “Each little step increased its mating success with resistant females, and this is what accounts for its evolution to its current spectacular state,” says Rowe. It’s not clear how dll produces the weird antennal structures, or why it only does so in males. The gene is much shorter in R.rileyi than in other water striders without weird antennae, which might provide a clue. Rowe also thinks that timing is important. “Late in development, the gene is doing very little or nothing else, other than modifying antennae,” he says. This allowed evolution to shape the male’s antennae without messing up other body parts that are under dll’s control. It also allowed the team to switch off the gene without creating monsters. 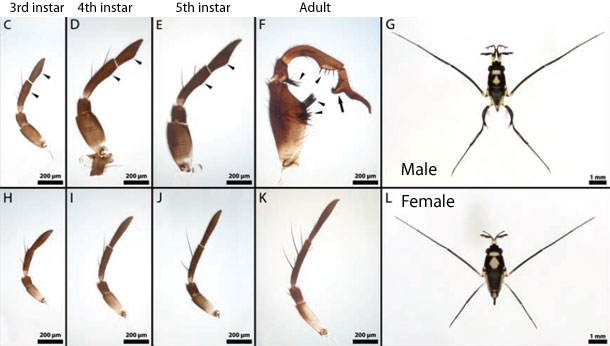 If, by now, you are feeling a bit sorry for the poor female, take heart. Even the normal males, with all their special grasping traits, only mate successfully on one in eight attempts. More often than not, the females manage to throw them off, despite having a wrench around their eyes and two spikes in their heads. Rowe thinks that there’s a constant evolutionary arms race between the males and females, with the males evolving ever more elaborate antennae to counter the female’s strength, and the females evolving their own counter-adaptations. These races may explain why the water striders are so diverse. Males of species also have weird antennae that “are so different you wouldn't recognize them as being antennae or from the same group.” More on water strider sex: