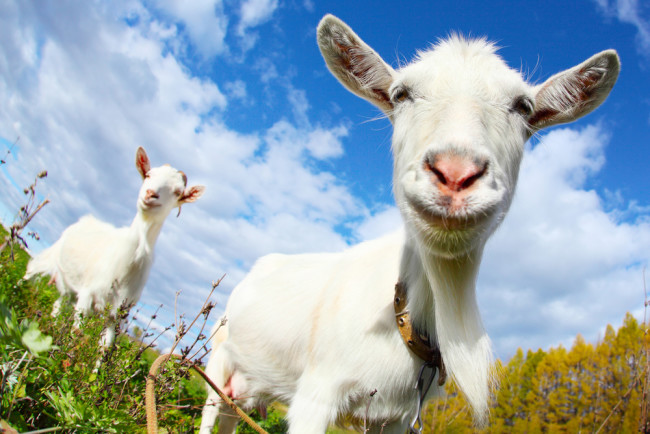 Male goats reek. Yet somehow, their mere presence can turn female goats on. Now scientists think they have figured out how this "male effect" works: They've discovered a citrus-scented chemical that males emit that speaks directly to females, activating their reproductive brain region and ramping up their sex hormones.

The study is the first to uncover a single molecule that could be activating the entire female reproductive center, according to the researchers.

Pheromones are chemicals released by the body to trigger particular reactions in members of the same species---in the case of sex pheromones, members of the opposite sex. All mammals have sex pheromones, and they come in two kinds: releaser and primer. Releaser pheromones trigger behavioral responses in the brains of potential mates. The include things like attraction, for example, but the effects are pretty fleeting. Primer pheromones, on the other hand, have been much harder to pin down. They elicit actual physiological changes in the body that are much longer lasting---things like the release of reproductive hormones responsible for ovulation and menstruation. But scientists hadn't been able to isolate or identify these primer hormones in mammals until a team in Japan figured out how.

Pheromones on the Brain

The researchers determined that the pheromones of interest were secreted from the skin on male goats' heads. To capture these chemicals, the scientists fashioned custom-made caps for the goats that could adsorb (not absorb) them. Two groups of goats---one castrated and one not---donned the special hats for a week, allowing the researchers to collect and identify the chemicals coming from the goat noggins via gas chromatography-mass spectrometry

. The researchers found several chemical compounds coming from the uncastrated goats that were missing from the sterile males. Many of them had never been found in nature before. Next up was determining if and how the females would react to these chemicals. The researchers used electrodes to monitor neural activity in conscious female goat brains. They looked specifically at the hypothalamus, the particular region of the brain controls hormones, among other things.

Get a Whiff of This

When the female goats whiffed some male goat hair in a plastic cup, the scent activated something called the gonadotrpin-releasing hormone pulse generator. That's a fancy way of saying it activated the master switch for all reproductive hormones. But here's the kicker: the females' reproductive systems were also turned on by the chemical compounds isolated in the lab. One particular compound called 4-ethyloctanal triggered a really strong response, enough so that the researchers are pretty convinced it is the elusive primer pheromone. As further proof, when the chemical is exposed to the atmosphere, it oxidizes to become 4-ethyloctanoic acid---the main ingredient in the stench for which male goats are famous. The researchers think their results

, published in Current Biology, could explain the power of the "male effect" in goats and could help us better understand how pheromones regulate reproduction in other mammals, including humans.