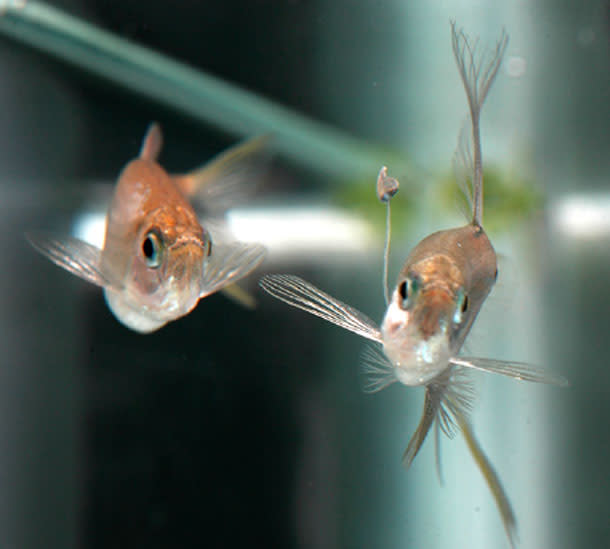 Anglers ensnare fish with bait, or with man-made lures that look like bait. Anglerfish do the same thing – they have worm-like growths on their heads that act as living fishing lures to entice their prey. The swordtail characin, a small fish from Trinidad and Venezuela, has a similar lure, and it uses it not to attract food, but sex.

The male characin has a small bean-shaped patch attached to his gill flaps by a thin thread. When he swims, he holds these ‘flags’ against his body. When he encounters a female, he flares one of them out in front of her. The female clearly thinks that the flag is food, for she bites at it vigorously. While she’s occupied, the male sidles across and impregnates her with his sperm. Unlike many other fish, which shoot sperm and eggs into the water, characins fertilise each other internally, just like us. The male, however, doesn’t have any sort of penetrating organ, so he needs to bump into the female just so. And his bizarre ornament ensures that she’s in exactly the right place. Niclas Kolm

have been studying the characins for several years, and they’ve shown that characins from different Trinidadian streams have distinctly shaped flags. Now, they think they know why. The characins feed on manna from heaven – insects that fall into the water from overhanging plants. On average, half of their diet consists of tree-dwelling ants, but that proportion can vary between 10 and 75 per cent. The ant portion of their menu is dictated by their environment: if they live in wider streams, they have more plants growing overhead, and more ants fall within their reach. Now, Kolm and Arnqvist have shown that the flags of male characins look more like ants in streams where the female eats more ants. Together with Mirjam Amcoff and Richard Mann, they captured characins from 17 different streams around Trinidad. They measured the shape of the male’s flag and the contents of the female’s guts, and showed that these traits are related. In streams where females eat more ants, the males’ flags are more tapered and curved towards their far end. This more closely mimics the shape of an ant with its narrow waist connecting a thick torso and abdomen. It’s very different to the oval shape of a beetle – the characins’ second favourite food. 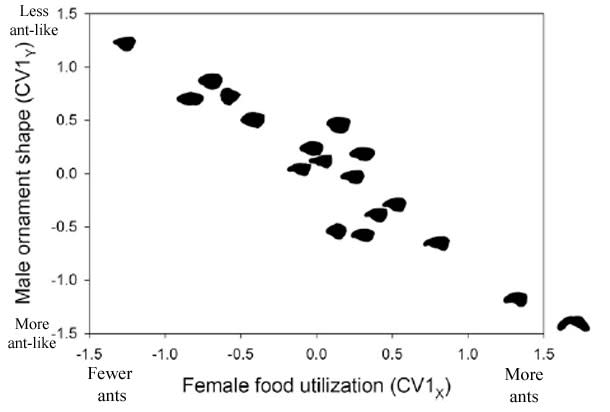 Are these ant-like flags more successful at attracting ant-eating females? Kolm and Arnqvist found out by using characins that had been raised in captivity, and had never seen an ant before. They fed these females with either ants or other insects, before presenting them with males from different streams. Sure enough, females that had gorged on ants were more likely to attack the ant-like flags of males from streams where females naturally eat lots of ants. It’s a really elegant experiment – one that strongly supports the idea that the male flags have evolved to tap into the sensory biases of the females. As Kolm writes, “The shape of the male flag ornament…has evolved to track the search images that females employ in foraging.” It’s a lure that evolves according to the preferences of its target. But the important thing here is that those preferences are originally driven by the environment. It’s the width of the streams that determines how many ants the females encounter, and thus what shapes the males’ lures take. This process, where animal signals evolve to account for the properties of their environment and stand out more strongly, is known as sensory drive. And in this case, it’s driving the divergence of different characin populations. Reference: Kolm, Amcoff, Mann & Arnqvist. 2012. Diversification of a Food-Mimicking Male Ornament via Sensory Drive. Current Biology http://dx.doi.org/10.1016/j.cub.2012.05.050