If you're looking for a gang of vicious killers, look no further than the Apicomplexans. These single-celled protozoans cause death and destruction across the animal kingdom. They infect everything from butterflies to people. Their diseases include Texas Cattle Fever, toxoplasmosis, and the scourge that makes Plasmodium the baddest Apicomplexan of them all, malaria. Scientists have named 6,000 apicomplexans, but they estimate there may be anywhere between 1.2 and 10 million species waiting to be identified. Every apicomplexan they'd studied so far is equipped with the same fearsome weaponry. Their cells are shaped like teardrops, and at the pointed end they have a ring of tubes, like the chambers on a revolver. When an apicomplexan prepares to invade a cell, it points those chambers at its prospective host and fires a set of molecules that grab the cell's surface and stretch it open so that the apicomplexan can slide in. Apicomplexans inherited their weaponry from their common ancestor, which lived several hundred million years ago, and they've thrived as pathogens ever since. Yet in the midst of this brutal dynasty, scientists have now discovered a peacemaker. For the first time, they've found an apicomplexan that bestows a biochemical gift to its host essential for survival. 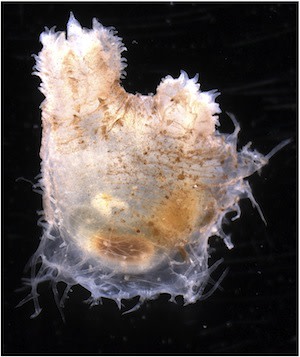 The host for this peculiar creature is a tiny animal known as the sea grape. It's basically a miniature blob that sits on underwater rocks along the coast of the eastern U.S., siphoning food from the passing water. Despite the outward differences between us and sea grapes, we're pretty closely related. In fact, sea grapes belong to the lineage of invertebrates that's most closely related to vertebrates. They even develop a notochord, a stiff rod supporting the spinal cord, just as we vertebrates do. As far back as 1874, biologists noticed some strange "parasitic elements" inside sea grapes. They lurked in an organ known as the renal sac, which is believed to purify the sea grape's blood much as our kidneys do. Sea grapes are the only animals beside humans known to make kidney stones, and yet they can somehow destroy the stones in their renal sacs. Some researchers guessed the parasite elements were fungi, dubbing them Nephromyces: "kidney fungus." But the closer scientists looked at this strange fungus, the less parasitic it looked. Every sea grape scientists have looked at (every member of the genus Molgula to be specific) carries a massive infection of Nephromyces in its renal sac. Yet they're not born with Nephromyces; every new generation of sea grapes have to be infected by it all over again, picking it up in the surrounding sea water. Likewise, Nephromyces only lives inside sea grapes, and inside sea grapes they only live in the renal sac, where they go through dramatic changes as they move their the stages of their life cycle. 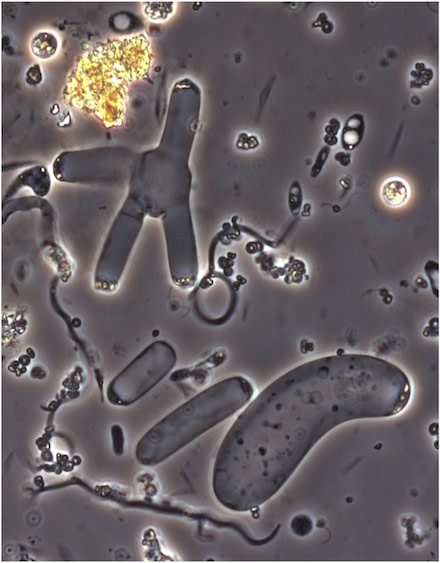 Mary Beth Saffo has been studying this strange association for 20 years (here's a 1994 profile in the New York Times), and she thinks it's an intimate partnership. The sea grapes give Nephromyces a shelter and a never-ending buffet: its kidney stones. In exchange, Nephromyces produces nutritious compounds from the stones that the sea grapes can use. Actually, Saffo suspects, it's a three-way partnership, because Nephromyces harbors bacteria that helps it break down the stones. To get a better understanding of Nephromyces, Saffo and her colleagues recently fished out some of its DNA. They had reason to doubt that the DNA would reveal Nephromyces to indeed be a fungus. It didn't have any traits that were unique to any group of fungi, and it had also some peculiar features not found in any fungi; in one stage, they sprout a pair of swimming tails. But it would have been hard to have predicted Nephromyces was an apicomplexan, belonging to a lineage of millions of species of parasites. Yet that's what its DNA clearly shows. 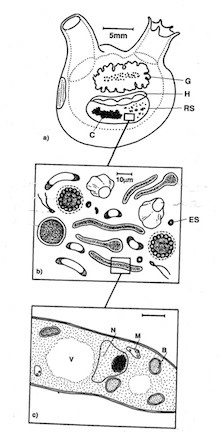 In retrospect, perhaps earlier scientists could have guessed it was an apicomplexan after all. It has some structures at one end that look like the revolver cylinders of more familiar apicomplexans. And when Nephromyces first gets into a sea grape's bloodstream, it takes on a worm-like shape, slithering along until it finds the renal sac. That's the same form that Plasmodium takes when it is injected by a biting mosquito and slithers through the blood stream to find the liver. But instead of causing a disease like malaria, as Plasmodium does, Nephromyces proceeds to cure its host of gout. Saffo is not the first biologist to discover a parasite turned mutualist. But it's hard to think of another case in which a species has turned its back on such a huge legacy of death and disease. How it made such a massive swing is left for Saffo and others still to figure out. It's possible that once Nephromyces picked up its bacterial passengers, it could thrive inside sea grapes without making them sick. Perhaps in order to put its old ways behind, a parasite just needs a little help from its friends. Reference: Saffo et al, "Nephromyces, a beneficial apicomplexan symbiont in marine animals." PNAS. http://www.pnas.org/cgi/doi/10.1073/pnas.1002335107 (Link will start working at some point this week.) [Images courtesy of Mary Beth Saffo] [Update: 8/24/10 9:30am: A few minor fact-checking corrections.]