It is literally very difficult to mend a broken heart. Despite its importance, the heart is notoriously bad at regenerating itself after injury. If it is damaged - say, by a heart attack - it replaces the lost muscle with scar tissue rather than fresh cells. That weakens it and increases the chance of heart failure later on in life. No wonder that heart disease is the western world's leading cause of death and illness. 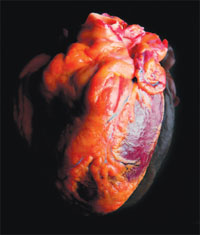 If that picture seems bleak, two teams of scientists have some heartening news for you. The first has found that the heart does actually have the ability to renew its cells, albeit to a limited degree. And the second group has discovered a cocktail of proteins can nudge this process along, at least in mice.

The heart is made of an exclusive breed of cells called cardiomyocytes, whose synchronised contractions provide the heart with its beat. The cardiomyocytes develop from a more basic layer of cells called the mesoderm, which also gives rise to bones, cartilage and other tissues. Now, Jun Takeuchi and Benoit Bruneau from the Gladstone Institute of Cardiovascular Disease have found that a cocktail of three proteins - Gata4, Tbx5 and Baf60c - are enough to transform mesodermal cells into beating cardiomyocytes.

All three are needed for the job. Together, they managed to switch on the full gamut of genes needed to program the mesoderm of embryonic mice into heart cells. When they were added, Takeuchi and Bruneau found signs of various proteins that are associated with developing embryonic hearts, even in parts of the mesoderm that would normally not turn into heart muscle. These out-of-place cells developed very quickly too, for they started beating before the mice's own heart cells did.

That's a massive achievement and one that's completely unprecedented for mammals. Other groups have tried to use protein combos to produce cardiomyocytes in other species, but with little success. In chicks, certain combinations switched on genes involved in heart development, but never went the whole way. In frogs or zebrafish, which have simpler hearts, two proteins were used to produce heart cells, but with just a one in ten success rate. Takeuchi and Bruneau managed to do the same in 9 out of 11 mouse embryos.

Gata4 and Tbx5 are unique to the heart and faulty versions of them are linked to heart disorders. Both proteins are "transcription factors", molecular executives that control and activate other genes. But they're useless without Baf60c, another protein exclusive to the heart and whose absence causes heart defects.

Baf60c's is a doorman that allows the two executive proteins to do their work. It repackages DNA to expose specific genes for activation. Takeuchi and Bruneau showed that only in its presence could Gata4 stick to the DNA of two important heart-related genes. Takeuchi and Bruneau thinks that focusing on Baf60c was the key to their breakthrough. Gata4 can kick-start the sequence of events that produces heart cells and Tbx5 finishes things off. But Baf60c - the doorman protein - is needed to allow the other two to do their job in the first place.

If all this sounds promising, there's a massive caveat. So far, the duo has only managed to produce new heart cells in mouse embryos, and only very young ones at that. There's no guarantee that the same proteins could be used to encourage the growth of new heart cells in adult mice, let alone humans. Nonetheless, it's a good start and will hopefully lead to more answers down the line.

There's another reason to think that there's a future in trying to stimulate the production of new cells in adult hearts - the process actually happens naturally. Until now, scientists have been unsure about whether we're stuck with the same set of cardiomyocytes from birth, or whether we can produce new ones. During our lives, our hearts become 30-50 times heavier, but that's mostly because existing cells swell in size.

Studying the turnover of new cells in such unchanging tissues is a big challenge. And it's one that can't be solved by the traditional method of injecting mildly radioactive nucleic acids to see if they get included in freshly created DNA. In lieu of that, Olaf Bergmann from the Karolinska Institute relied on an unorthodox method - he relied on fallout from the Cold War's nuclear test to carbon-date heart cells.

These tests released huge concentrations of carbon-14 - a mildly radioactive form of carbon - into the atmosphere. These levels spiked to unprecedented heights, only to quickly fall away after the Test Ban Treaty of 1963. In the meantime, the spike of carbon-14 was converted into carbon dioxide. Some of it was taken up by plants and made its way up the food chain to people alive at the time. Any new cells that people created during this time would have DNA that was laced with high levels of carbon-14. These levels act as a date-stamp for the cell's birthday, reflecting the amount of carbon-14 in the air when it was born. 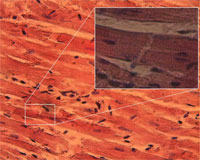 Bergmann found that levels of carbon-14 in the hearts of people born before the Cold War were much higher than expected for the time. These hearts clearly contained cells that were created during the Cold War, after their owners were born. On average, it seems that our hearts are younger than we are by about 6 years.

Bergmann found the same thing when he focused only on the cardiomyocytes, which only make up a small fraction of the heart's cells. He tracked them down by searching for proteins found only in these cells and carbon-dated the DNA inside them. Again, their carbon-14 levels showed that they had been produced several years after their owner was.

Heart specialists might point out that cardiomyocytes do produce new DNA during childhood, so that adult cells have two or more genome copies. But we know that this duplication stops at the age of 10, and at least three of the people in Bergmann's sample were older than that before the Cold War sent atmospheric carbon-14 levels skyrocketing. The only explanation for the unusually high carbon-14 levels in their cardiomyocytes is that they were new cells.

Although adult hearts clearly do renew themselves, it's still a very slow process. Bergmann calculated that we regenerate around 1% of our heart every year in our 20s, and just 0.45% in our 70s. Based on his data, Bergmann thinks it's unlikely that only a few cardiomyocytes are producing new cells rapidly while the rest sit around idle. Instead, there's probably an even chance that any one cell is exchanged for a new version. But with such a slow turnover, the majority of our cardiomyocytes will never be exchanged - at the age of 50, just over half of these cells have been with us from birth.

This natural renewal is clearly not enough to repair the damage caused by a heart attack but at the very least, it suggests that there is a natural programme of repair that could be stimulated by combos of drugs or proteins, like the one discovered by the first study. Bergmann's work indicated that a target exists, and Takeuchi and Bruneau have suggested a way of hitting it.

Images: Cardiomyocytes by Dr. S. Girod, Anton Becker; all other images from Nature