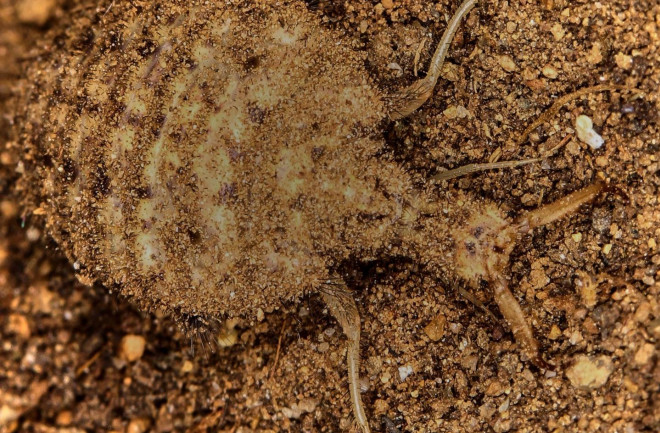 An antlion larva. (Credit: George Wilkinson) The lair of an antlion looks like nothing more than a pit from above. To an ant walking on the surface, it probably looks like nothing at all. But one wrong step can send an unfortunate insect tumbling to the bottom of a clever trap in a shower of sand. There, a pair of merciless jaws await, held wide open to deliver a deadly embrace. To those of us with even a bit of pop culture knowledge, the pits the insects dig look suspiciously familiar. If you're waiting for a forest of tentacles and a beaked tongue to emerge, you're probably not alone. To an ant, the creature actually waiting down there is scarcely less frightening, though its trap is a fraction of the size of the full-grown Sarlacc that Luke Skywalker almost falls into in Return of the Jedi. But the antlion may even outpace the Sarlacc when it comes to the engineering of holes. Antlion traps are perhaps the most exquisite examples of pit digging known to man — so finely calibrated that a single step can be enough to trigger an unstoppable avalanche. Researchers from the U.K. now say they've used the power of mathematical modeling, paired with some experiments with actual antlions as subjects, to uncover why the predatory insects are so good at turning holes in the ground into deadly traps.

Antlions look something like dragonflies as adults, and they usually feast on nectar or pollen. But, as larva, they're terrifying. A larval antlion has no wings, and is possessed instead of a squat body and a pair of wicked jaws. They use their bodies as living shovels to excavate pits in sand and loose dirt, digging in a curious spiral pattern and flinging excess material skyward by propping it atop their heads and giving a kind of violent nod. They're remarkably fastidious when it comes to constructing their pits: they remove all but the finest grains of sand or dirt. The attention to detail is not without reason, though. The insects are taking advantage of the fact that smaller sand grains are more unstable than large ones. Constructing a pit with just small grains means that its walls are much more likely to collapse under the weight of a small insect, catalyzing an avalanche that will carry it down to the bottom. Once prey is down there, the unstable slopes make it hard to escape, and the antlion doesn't help matters, either. As its prey scrabbles frantically at the walls surrounding it, the antlion adds insult to injury by flinging showers of sand at it. The rain of particles kicks off further avalanches and trips the insect up.

To find out how antlions are so efficient at building sandy traps, the researchers brought some into the lab and supplied them with a few different kinds of building materials: large and small grains of sand. They mixed the two kinds of sand together and let the insects dig away. Paper spread around the outside of the trap caught all of the grains ejected, and the researchers painstakingly weighed the grains and hand-labeled the location where every one fell. No easy task, to be sure, but the work let the researchers see inside the antlions' digging strategy. Larger grains were flung out, as expected, but the researchers found that even the insects' digging pattern was optimized for efficiency. Digging in a spiral pattern, from the outside in, meant that the distance they needed to throw most grains was minimized, saving time and energy. Furthermore, their actions are tuned to cause larger sand grains to cascade to the bottom as they dig, making it much easier to find and eject them. The insects are so good, in fact, that they throw out more material than was needed to fill in the pit in the first place, ensuring they include only the very finest sand grains. Once its trap is built, an antlion will settle beneath the bottom layer, hidden except for its jaws. There, it waits for the tremors and dusting of sand that signal an imminent avalanche — and the arrival of another meal. The researchers work appears Tuesday in Proceedings of the Royal Society: B.