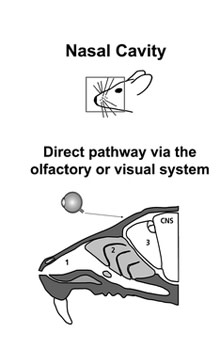 It sounds like the start of a science fiction movie: a lethal brain disease that goes airborne. But while scientists have indeed found that the prions responsible for mad cow disease and other neurological ailments can float on the breeze and infect those who inhale, they say there's no reason to barricade your gas-masked family inside your house. Prions are misfolded proteins that cause brain degeneration; in mad cow disease they've typically been transmitted when one cow eats the infected brain or spinal cord tissue of another (something that agricultural institutions now agree shouldn't happen in the first place). Other prion diseases, including the human variant Creutzfeldt-Jakob disease, are also passed along through body fluids and tissue. But for a new study published in PLoS Pathogens, researchers decided to find out if airborne prions could serve as infectious agents. The short answer: Yes. Researchers sprayed an aerosol containing as little as 2.5 per cent infected brain tissue into a chamber containing healthy mice, and found that all of the exposed mice sickened and died of the prion disease scrapie within six months. The mice that spent the most time in the chamber (the exposure times ranged from 1 to 10 minutes) showed signs of the disease soonest. Study coauthor Adriano Aguzzi says it was a startling result:

“Common knowledge is that prions aren’t airborne, and can’t cause infection that way.... We were totally surprised and also a bit frightened at how efficient [airborne infections] were.” [Wired]

Aguzzi believes the prions moved through the nostrils' olfactory nerves straight to the brain--and some may sneak in through the eye's optic nerves as well. Does this still sound terrifying? Well don't fret, because prions don't usually exist in an aerosolized form, and therefore you're extremely unlikely to wander into a cloud of deadly peril. Only a few people have to worry about this: slaughterhouse workers and prion researchers. Wired reports

that slaughterhouse workers who remove brains or spinal chords with bone saws may create airborne prions, and New Scientist describes the threat to research and diagnostic labs:

Labs that test for prions routinely make 10 per cent suspensions of brain tissue, and any handling – pipetting, for example – creates aerosols. Prion labs are not required to use safety equipment that protects workers from aerosols. Aguzzi, who tested his aerosols at the highest level of protection, thinks those labs may now need to rethink safety measures. [New Scientist]

80beats: Who Needs DNA? Prions Evolve Without It