Macaques Are Learning to Communicate with Touch-screens 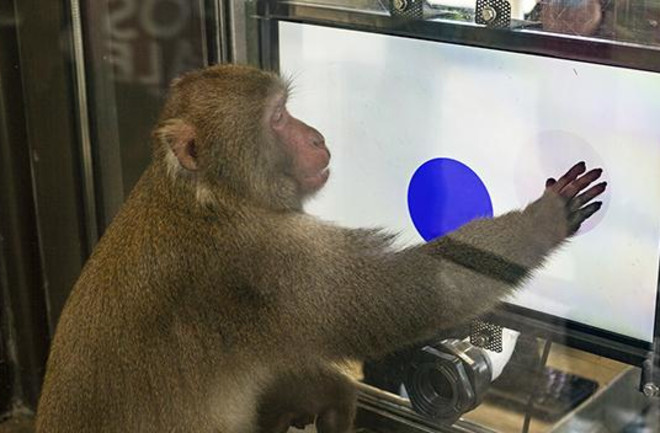 Akita, a 10-year-old Japanese macaque, sits in a glass booth calmly tapping away as colored dots flash on a video touch-screen anchored to a wall in front of him. Red, blue, yellow - he picks the dots in the requisite order, then grabs for his reward: fresh blueberries that pop out of a tube onto the floor next to him.

Akita is one of eight adult Japanese macaques at the Lincoln Park Zoo in Chicago being trained to use a touch-screen. For now, he's mastering simple sequencing tasks. But soon, researchers will start him on new exercises aimed ultimately at getting inside his head—finding out what he and the other macaques think and feel about their life in the zoo.

How Are You Feeling?

A death or birth among their troop? Too many noisy visitors pressed up to the glass in front of them? Researchers hope to find out how these things affect the animals so that they can adjust animal care in response. Touch-screens, they hope, will provide a way to do this.

"The goal is to evaluate and enhance their welfare," says Katherine Cronin, lead research scientist for the zoo's macaque project, which she believes to be unique to North America.

Melissa Bateson, a professor of ethology at Newcastle University in the United Kingdom, has studied ways to communicate with animals and consulted with Cronin. Over the past decade, she says, animal welfare scientists have tried to adapt tasks used to measure emotions in humans to animals, but the process has been "quite laborious," with a person needed to interact with the animal, offer it choices and record its behavior.

"Translation of these tasks to a touch-screen that can offer choices and record data automatically would be a great advance," she says, and "would pave the way for more widespread use of these novel approaches in applied settings such as zoos."

Visitors can view the research in progress most weekdays at the Regenstein Macaque Forest at the zoo.

Cronin's work with the macaques began in March 2015 and has involved a series of gradual "shaping" steps: first getting the monkeys to approach the two glassed-in booths adjoining the macaques' habitat, then waiting as the monkeys figured out how to push through the pet-door opening, touch the touch-screen and ultimately learn to tap specific images on the screen.

Cronin hopes soon to try exercises aimed at teasing out monkeys' states of mind—whether they are pessimistic or optimistic, happy or sad—based on principles of human psychology. For example, if you're in a good mood, you notice positive things. Monkeys could be shown an array of pictures of happy and not-so-happy things on the touch-screen; seeing which images they click could give an insight into their feelings. Researchers check these conclusions against monkeys' stress hormones, which are collected in feces and analyzed, as well as observations of their interactions in the habitat.

Already the research has helped Cronin and her team glean insights into the monkeys' social environment—a rigidly defined hierarchy that the macaques self-police. This means that the monkeys voluntarily come to the booths during training time (generally mid-day, five days a week) in their ranked order, with alpha Akita first.

Even if the macaques don't get to the point of being able to communicate their cares and woes to their keepers, the touch-screen training has helped enhance their daily lives. Cronin says that research shows engaging in tasks that challenge the monkeys' minds is in itself "a way to improve their welfare and keep them stimulated, because they're such smart, complex animals."