Luring Out The Missing Biosphere 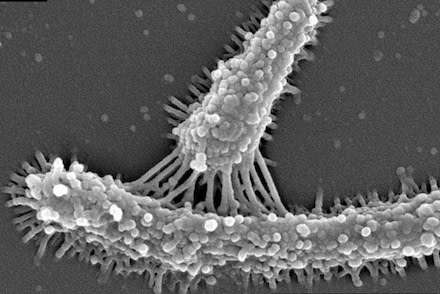 Most of life on Earth is a mystery to us. The bulk of biomass on the planet is made up of microbes. By some estimates, there may be 150 million species of bacteria, but scientists have only formally named a few thousand of them. One of the big causes of this ignorance is that scientists don't know how to raise microbe colonies. If you scoop up some dirt and stick it under a microscope, you'll see lots of different microbes living happily there. If you mash up all the DNA in that mud and read its sequence, you'll discover an astonishing diversity of genes belonging to those microbes--thousands in a single spoon of soil. But now try to rear those microbes in a lab. When scientists try, they generally fail. A tiny fraction of one percent of microbe species will grow under ordinary conditions in Petri dish. This staggering difficulty is the reason why E. coli and a few other species became the laboratory darlings of biologists during the 1900s. As I write in Microcosm, E. coli will happily explode in a flask full of broth. As a result, a lot of what we know about life we know from E. coli. Certainly a lot of those lessons hold true for any species--genes encoded in DNA, DNA used to produce RNA and proteins, a genetic code, and so on. But there are a lot of microbes that are very unlike E. coli. Even in our gut, for example, E. coli is just a minor player in an ecosystem made up of hundreds or thousands of species. Yet we know relatively little about its neighbors. One reason for the trouble we have in raising microbes is that the environment we like is not the environment a lot of them like. If you are feeding on minerals in boiling water at the bottom of the ocean, it's possible that you might find life in a luke-warm flask in an oxygen-rich atmosphere at sea-level air pressure unbearable--perhaps even toxic. But the physical surroundings of microbes can't account for all the trouble they pose for would-be microbial zoo-keepers. If you scoop up some wet sand from a pleasant beach, you will still be hard-pressed to get more than a few species to grow in the lab. To coax bacteria to grow, microbiologists have been upgrading their Petri dishes. They have been building cages that mimic the natural habitat of the bacteria, and in some cases taking their chambers out of the lab and putting them in the environments where the bacteria live. These semi-wild chambers have brought scientists more success, and they've also helped scientists figure out why the microbes are so hard to grow in the first place. Along with the right physical conditions, microbes need to live alongside the right microbes. In the new issue of Chemistry and Biology, a team of scientists--led by Anthony D'Onofrio, a post-doc in the laboratory of Kim Lewis at Northeastern University, and Jason Crawford in the lab of Jon Clardy at Harvard--report a striking success in cultivating bacteria that were previously impossible to cultivate. They made their discovery while studying some bacteria that live on a beach near Boston. Some of the bacteria, while unable to grow on their own in a Petri dish, grew if they were near certain other species. Perhaps, the scientists speculated, the hard-to-grow bacteria depended on something the other species made. The scientists tested different molecules made by bacteria to see if any of them were fostering the growth. They eventually figured out that the responsible molecule was something known as a siderophore. Some species of bacteria make siderophores as a way to get their minimal daily required does of iron. Iron is essential for the growth of cells, but in many environments free iron is in short supply. So bacteria make iron-trapping molecules--siderophores--and release them through special channels. The siderophores drift around, and sometimes manage to snag iron atoms. They fold up around the iron, assuming a shape that allows them to slip through other channels back into the bacteria. Once inside, they open up again and set their iron free. It turns out that a lot of species on the beaches around Boston--and presumably in a lot of other places in the world--don't make their own siderophores. Instead, they rely on other species to produce siderophores, and once those molecules swallow up the iron, the bacteria that don't make siderophores snatch them up. The scientists found that with different kinds of siderophores made by different species of bacteria, they could suddenly get a lot of microbes to grow. Discoveries like these are exciting both in a practical and intellectual way. We've already harvested lots of valuable molecules from microbes, such as antibiotics and gene-copying enzymes. If scientists can raise lots of new species of microbes, they may be able to find new molecules. But the result is fascinating in itself. Apparently, a lot of microbial species depend on the kindness of strangers. And apparently, there are bacteria out there that are churning out siderophores despite the fact that other species are slurping up the iron they forage. If that was all there was to the story, this would not be a situation that could last long. The cheaters would thrive by skipping the effort of making siderophores, and eventually there wouldn't be enough honest bacteria left to keep all the microbes supplied with their iron. It's likely, instead, that the cheaters are not cheaters at all, but rather have services of their own to offer the microbial community. And so the reason that we know so little about life on Earth may be that we have yet to figure out the complicated social life of microbes.