Lucy's Demise: What Killed the Most Famous Fossil 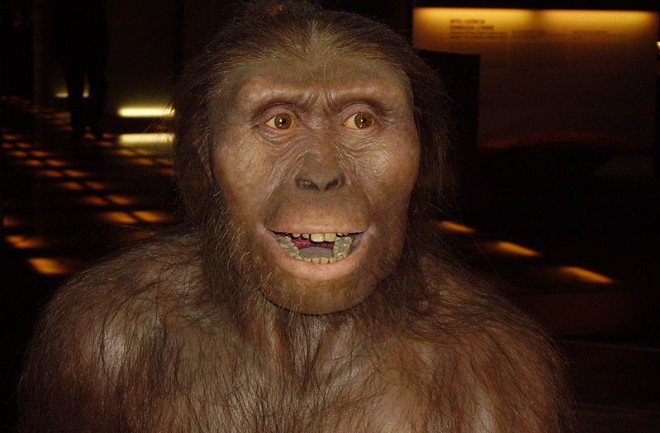 An artist's reconstruction of Lucy in better times. The most famous Australopithecus afarensis, a species likely ancestral to our own, appears to have died from injuries sustained in a fall, according to new research. The study reignites an old debate about the early hominin lived. Credit: Wikimedia Commons.

She’s the most famous of our distant ancestral kin and, while it’s way too late to send flowers, we now know how Lucy died some 3.18 million years ago. The most famous Australopithecus afarensis appears to have died due to injuries sustained in a fall, according to new research. But it’s not quite case closed: The proposed scenario that led to her death is fanning the flames of an old debate about how the early members of our family tree lived.

When her remains were unearthed in Ethiopia’s Afar region in 1974, Lucy kicked off a new era in the understanding of human evolution. At the time she was the oldest hominin fossil ever found. And instead of the odd jawbone, tooth or partial skull typically found by paleoanthropologists, much of Lucy’s skeleton was recovered — including enough to see she had traits handy for tree-climbing as well as for walking upright. More than 40 years on, paleoanthropologists still argue over whether she and other members of A. afarensis spent most of their time above ground or on it, walking fully upright.

The new findings, published today in Nature, don’t settle the debate. But they do add an intriguing new piece of evidence to the discussion. According to the researchers, the plausible explanation for the severe injuries Lucy suffered shortly before death is that she fell out of a tree.

A team led by anthropologist John Kappelman of the University of Texas at Austin determined through computed tomographic scans that several of Lucy’s bones had been fractured shortly before death. What’s more, by comparing the fractures to those seen in hospital ERs, the team was able to reconstruct Lucy’s last moments.

The wrist end of one of Lucy's lower arm bones undergoes computed tomographic scanning, a technology that allows fossil whisperers to see a bone's structure in much greater detail than ever before. Credit: Marsha Miller/UT Austin

The wrist end of one of Lucy’s lower arm bones undergoes computed tomographic scanning, a technology that allows fossil whisperers to see a bone’s structure in much greater detail than ever before. Credit: Marsha Miller/UT Austin

Kappelman and company believe she fell from a height of about 40 feet — this is based on estimates of how much she weighed and the severity of her injuries — and researchers know enough about the environment in the immediate vicinity of where she lived to say she had to have fallen out of a tree.

The team arrived at their conclusions after CT scanning Lucy’s fossilized bones and generating more than 35,000 images. Fossils usually get pretty beat up in the time between an organism’s death and excavation by researchers. A lot of things can happen: predators can scavenge the bones, the remains can get washed down a river and tumbled in the water, and, of course, as layers of sediment build up on the bones, most are broken or crushed by the weight.

However, the resolution of the CT scans allowed Kappelman and his team to see something that could not be explained by the rough-and-tumble forces at work on a dead body that’s on its way to becoming a fossil. Lucy’s upper right arm bone provided the first clue: Kappelman noticed that after fracturing, bits of bone were still in place, which suggested that the soft tissue around the bone was still there, keeping everything together instead of spreading it around as we’d expected to see in a bare bone broken by the weight of sediment on top of it.

After that first hint, the team scrutinized Lucy’s scans and identified additional fractures she must have experienced shortly before death: The patterns of the fractures indicated she was still alive when they occurred, but there were no signs of healing, indicating she didn’t survive for long afterward.

The researchers came to the conclusion that she had fallen feet first out of a tree, landing on her heels and then stretching out her arms to brace herself as she toppled forward. The extent of the injuries suggest she died within moments after the fall.

Anthropologist John Kappelman of the University of Texas at Austin strikes a pose with 3-D printed models of Lucy’s skeleton. The replicas demonstrate how her right upper arm bone experienced a nasty compressive fracture at the time of her death, one piece of evidence that led Kappelman's team to conclude she had fallen from a tree. Credit: Marsha Miller/UT Austin.

Anthropologist John Kappelman of the University of Texas at Austin strikes a pose with 3-D printed models of Lucy’s skeleton. The replicas demonstrate how her right upper arm bone experienced a nasty compressive fracture at the time of her death, one piece of evidence that led Kappelman’s team to conclude she had fallen from a tree. Credit: Marsha Miller/UT Austin.

To The Memory of Lucy

Determining Lucy’s cause of death isn’t just an interesting and impressive research finding (seriously…to be able to determine how bones fractured 3.18 million years ago is pretty dang impressive.). It also reignites the long-smoldering debate over whether Lucy and her kind were tree-dwellers or fully bipedal, terrestrial types like humans today.

Doubters will quibble over whether the intriguing conclusions from this CSI:Afar Region are definitive, but researchers outside of the team are quick to acknowledge the study’s importance.

“This paper is wonderful: It forces us to put Lucy in context,” says Harvard University paleoanthropologist Daniel Lieberman, who was not involved in the research but is familiar with the team’s conclusions. “It’s our job as scientists to be skeptical but they’ve made a very compelling case.”

Lieberman, who focuses on the evolution of the human body, has long believd that Lucy and her A. afarensis kin had a mix of traits that suggested they spent time both in the trees and on the ground. Given how heated debate has been about the A. afarensis lifestyle — often simplistically reduced to an either/or debate about whether the species was arboreal or terrestrial — Lieberman sees a special significance to conclusions by Kappelman’s team.

“It’s poetic justice, really,” Lieberman says. “Lucy is an iconic Australopithecus. She’s the poster child for the (A. afarensis) species. The fact that she died falling out of a tree is not surprising… Even if you’re good at living in trees, sometimes you’ll still fall out of one.”

Want more? Watch Kappelman and other members of the team discuss their research in a video from UT Austin. Working with the team, the Ethiopian National Museum is also making some of the high-tech scans available to the public at eLucy.org.

UPDATE: Want even more? Listen to an interview I did the day the story broke with my “Central Time” friends at Wisconsin Public Radio.