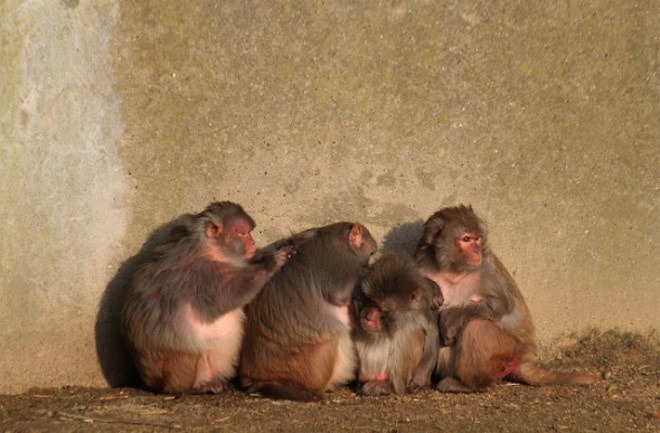 Rhesus macaques live in social hierarchies, and for those at the bottom, well, life is not so great. After extensive studies on these macaques, scientists have found that low rank is correlated with poor health as well as physiological changes in stress-related hormones, sex hormones, and white blood cell counts. In this week's Proceedings of the National Academy of Sciences, a new study went one step further to show that gene expression, especially that of immune-related genes, was also dependent on social rank. By following female rhesus macaques as their ranks changed over time, the researchers gathered evidence for causal link's direction, too. It wasn't that poor health lead to low social rank; it was falling on the social ladder that led to physiological and gene-regulation changes. At the beginning of the experiment, 49 female rhesus macaques were put into new social groups and given new ranks. Then the researchers took white blood cells from the monkeys and analyzed the expression of 6,097 different genes. 535 of them were more highly expressed in monkeys from the top of the social ladder, and 452 in monkeys from the bottom. Some of the genes upregulated in low-ranked monkeys are related to immune function, suggesting they have overactive immune systems. Ultimately, the researchers were able to take all this data and predict with 80% accuracy the social status of a monkey by looking at its gene expression alone. In humans, lower socioeconomic status is also correlated with poorer health, and some researchers have said that access to medical care and lifestyle differences don't entirely account for the link. The gene-expression changes found here point toward a possible molecular explanation, but drawing larger analogies between monkey and human behavior is a little more slippery, as human societies are a good deal more complex than the monkey groups tracked in this study. Past studies have also found that the effect of stress in hierarchies is dependent on the primatespecies and their level of cooperation and competition. Alpha male baboons, for example, are more stressed than their beta counterparts. The study in rhesus macaques is still nice molecular detective work showing that how the relationship between genes and health is more complicated than people often think. [via Nature News]