Samuel Morton's skull work has been used as a classic example of researcher bias. Newfound research notes might paint a slightly different picture. 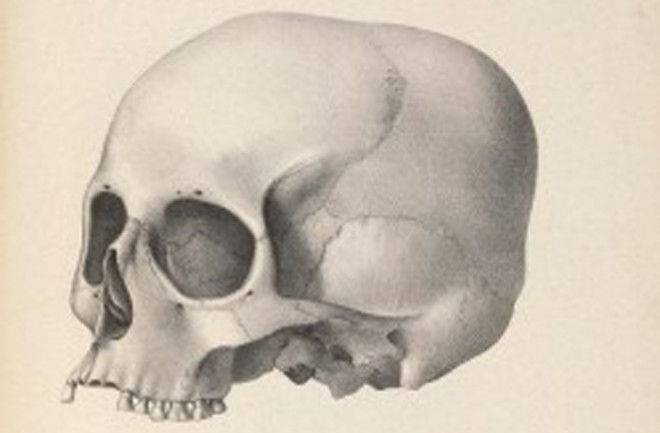 A plate from Morton's 1939 Crania Americana. (Credit: <a href='https://archive.org/details/Craniaamericana00Mort/page/n331'>archive.org</a>)

Samuel Morton collected and studied hundreds of human skulls in the early 19th century. By objectively measuring differences in brain size between people from various societies, Morton believed he had used science to prove that white people were intellectually superior to other races.

Modern science has long since shown that brain size isn’t necessarily related to intelligence. Many researchers suspect brain size is instead tied to things like climate and body size, while intelligence may be more related to the efficiency of the connections between neurons or the number of total neurons in the brain.

But at the time, Morton and others used his conclusions as a “scientific” justification for slavery, and he is considered a founding father of scientific racism. In recent decades, Morton’s work has been upheld as a model case for how unconscious bias can creep in to even a careful researcher’s work. Dozens of scientists have published on the multitude of ways Morton, unconsciously, demonstrably biased his own results in favor of his prejudices.

Now, a scientist has rediscovered Morton’s 178-year-old research notes. And they may force scientists to reexamine how they remember Morton’s work and, more importantly, the role of bias in the scientific endeavor.

Skulls Measured from Around the World

It all started in 1839, when naturalist Morton published a book called Crania Americana that detailed 158 human skulls he had amassed from across the Americas. He hoped to use his collection to learn how groups of native people were related from across the two continents.

Among other details, he listed the internal volume, what he called the “cranial capacity,” of each of the skulls. To measure this, he (or his assistant) had filled each skull with white pepper seeds, and then transferred the seeds into another vessel to find the volume.

Somewhere near the end of Crania Americana — almost as an afterthought, a researcher later would point out — Morton reported the average cranial capacities of four other races in comparison with the Native Americans. Caucasian skulls were largest, followed by Mongolian, Malay, Native American, and finally African skulls.

The following year, he published a full catalog of his collection of hundreds of skulls from around the world. He then used his personal copy of the printed 1840 Catalogue of Skulls as a research notebook, recording many of his original seed measurements that had gone into the Crania Americanacalculations.

Morton eventually crossed out and replaced some of these numbers, likely after discovering inconsistencies while remeasuring some skulls. He would also write some numbers into the front cover of the book, which, based on the values, we’ll later learn were initial dabblings in a different measurement technique: replacing the seeds with lead shot.

In 1841, Morton issued a printed announcement to say that lead shot was much more accurate than seed, and that he’d be switching methods. Then in 1849, he published an updated catalog of skulls, this time with a shot-based cranial capacity measurement listed for every skull, across all the races.

Now armed with a greater sample size and more accurate skull measurements, Morton again presented his results. Caucasians had the largest brains, and Africans the smallest. This information was misunderstood and widely misused.

It’s safe to say, he’s not considered one of the good guys from science history.

Samuel Morton, a 19th-Century anthropologist whose work on skulls of different races has been a source of debate for over a century. (Credit: Wikimedia Commons)

The Mismeasure of Man

Fast forward more than a century. Morton’s work had been largely forgotten until Stephen Jay Gould, an evolutionary biologist and longtime Discovercolumnist, published a 1978 Science paper titled, “Morton’s ranking of races by cranial capacity: Unconscious manipulation of data may be a scientific norm.” In the paper, which he later would develop into the non-fiction bestseller The Mismeasure of Man, Gould outlined a number of ways in which Morton’s results were biased by unconscious inconsistencies in the way he carried out his experiments.

The most famous of Gould’s arguments was that Morton, certain that the African skulls would have smaller brains than the Caucasian skulls, unconsciously under-filled the black skulls with seeds while tightly packing the white skulls. Gould’s evidence? When Morton switched from using seed to the more-accurate lead shot, the average size of the African skulls increased a lot more than that of the Caucasian skulls.

But Gould didn’t have Morton’s book of handwritten seed-based skull measurements. No one did. Those data were assumed to be lost to time, so Gould only had the seed-based averages that were published in Crania Americana to compare with the individual shot-based measurements listed in the later Catalogue.

To complicate things further, Morton’s skull collection itself varied over time. Many of the skulls measured in 1839 were borrowed, returned to their owners, and not re-measured with lead shot in 1849. On top of that, new skulls were added to Morton’s collection before 1849.

In short, it was difficult, if not impossible, to draw solid conclusions about bias in the seed data without having the actual seed data. And so Gould’s claims ignited a decades-long debate among researchers about Morton and Gould’s claims about the skull datasets, their measurements, and the way both scientists calculated averages based on various subsets of skulls.

The Gould-induced obsession with Morton has never been about proving or disproving Morton’s racism — that was accepted long ago and especially once we learned bigger brains don’t mean bigger brainpower. Instead, it has always been a numbers game, with all sides trying to show, statistically, how Morton’s racism (or Gould’s anti-racism) affected his scientific conclusions, despite his efforts to remain objective.

You might think this debate could be easily settled by the skulls. Data can’t lie. Or can they?

Morton did much of his work at the Philadelphia Academy of Natural Sciences, where his skull collection and many other archives are still kept. Paul Wolff Mitchell, a graduate student at the University of Pennsylvania, was searching through these archives when he came across a first-edition copy of the 1840 Catalogue of Skulls – Morton’s personal copy with handwritten notes inside.

Mitchell had been working with the skull collection for long enough to recognize: These notes were the original seed-based measurements assumed to be lost to time. The missing seed data that would settle the Gould-Morton debate once and for all.

“It’s amazing what you can find in pretty obvious places when you look for it,” says Mitchell.

For the first time, Mitchell was able to compare apples to apples to see whether the African skull measurements increased more from seed to shot than did the Caucasians or other races, as Gould had claimed.

They didn’t. The seed measurements were equally unreliable for each of the races. Morton’s infamous unconscious under-filling of skulls of people he was biased against never happened.

The Good Guys Can Be Biased Too

Mitchell had been investigating Morton in the first place because he was perplexed by how similar Morton’s work was to that of another researcher, Friedrich Tiedemann, operating across the world in Germany.

Scientists typically strive to learn something new; to ask a new question or examine an old question in a new way. But Morton conducted nearly-identical work to Tiedemann, who published his skull studies in 1836 and 1837.

But rather than hoping to justify slavery and racism, as Morton did, Tiedemann hoped his measurements would do the opposite. He wanted to scientifically and objectively demonstrate that the races were equal. And just as Morton’s conclusions supported his predispositions about race, so did Tiedemann’s.

“I was especially intrigued that Morton is writing and researching in a time when someone else of equally high – at least – stature in the scientific community globally is publishing work that is in many ways, at least in regard to the data, equivalent to Morton’s,” says Mitchell. “And he’s coming to radically different conclusions. This to me was a real paradox.”

Friedrich Tiedemann, a 19th-century anthropologist who used his scientific study to make a case for equality of the races. (Credit: Wikimedia Commons)

Once Mitchell learned that the seed measurements couldn’t be blamed for the disparity in conclusions, he looked elsewhere in their methods.

He found that Morton and Tiedemann had analyzed their remarkably similar data in two completely different ways. And despite the extreme attention to detail both seemed to have for whether their volume measurements were accurate, neither ever documented why they looked at their data the way they did.

Morton compared averages, while Tiedemann compared the range of data (the minimum and maximum measurements) for each race. Neither method would come close to meeting the standards of modern statistical rigor. Neither scientist provided any reason for choosing the methods they did. Both scientists found the answer they wanted.

There are many other problems with the two researchers’ work in hindsight. We’ve learned a lot in the last century about random samples, sample size and statistics that have added weight to the conclusions we draw from data in the modern era.

But the bottom line is: Both researchers were equally biased. We just never paid any attention to the bias from the researcher that agreed with us.

“We might think Tiedemann was a more morally upstanding figure, someone with whom we can agree more, and his paper rings so much more modern in some ways than Morton’s does,” says Mitchell. “But he was biased, too.”

Nicolaas Rupke is a historian of science and professor of history at Washington and Lee University. He’s familiar with Mitchell’s work and the Gould-Morton skull saga, and considers Tiedemann a historical hero.

“In the literature on race and racism, there has been this excessive emphasis on the racists. And not on the anti-racists. Many people don’t even realize there were remarkable scientific anti-racists,” says Rupke, adding, “You know, we pick our heroes from the past according to our own values.”

But Rupke isn’t blind to the bias Tiedemann’s preconceptions introduced into his science. In fact, he’s seen evidence from throughout history where this sort of thing happens time and time again.

“I think it is entirely true that you can be factual, totally factual, but you can get red hot under the collar when people say, oh, you’re biased. And you say, but here are my facts and I’m honest about them,” explains Rupke. “Yet these facts can serve different social-political leanings.”

“When (science is) embedded not so much in technological practical needs but in value systems that have to do with society, with politics, and all that, it’s extremely difficult to get clean science,” he says.

As for Mitchell, he thinks the process of modern science will keep us honest.

“Scientists have biases … and the best way we get through them is to not assume that any individual should ever be free of bias but to expect, through a communal process, that bias is something that can be at least minimized if not completely eradicated,” says Mitchell.