They might not have made the headlines in 2020, but there was plenty of eruptions around the planet this year. 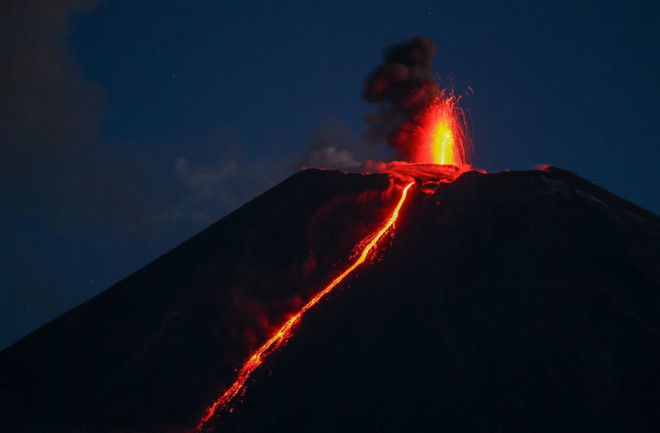 2020 has been quite the year. Any number of world-shattering events will be remembered for decades to come but at least we can say one thing: it wasn't the volcanoes' fault. Even as the pandemic, elections and a myriad of other things captured our attention, volcanoes kept on doing their thing this year. Most didn't make the headlines, but we can look back at some of the most active volcanoes on our planet during this past year.

In 2020, we had a lot of volcanic activity! Now, that isn't to say it was abnormal. The planet is always volcanically active. There were dozens of volcanoes active almost the entire year at some level. I won't even mention all the eruptions this year or even some of the volcanoes that had the most prolonged activity. My countdown is more about some of the most notable events at volcanoes this year.

Ever wonder where to find out which volcanoes are restless around the globe? The best place to start is the Smithsonian Institution & USGS Weekly Volcanic Activity Report. This year was the 20th anniversary of the Report and the staff at the Global Volcanism Program looked back at some of the biggest volcanic events they covered over the past two decades.

Some of the smaller events from this year included lots of lava flows from Karangatang and Fernandina, explosions topped 25,000 feet to start the year at Shishaldin, frequent steam driven blasts at Rincón de la Vieja, eruptions under the sea at Kavachi, pyroclastic flows from a new dome at El Reventador, as well as an explosion that killed a miner and produced 9 foot waves at Ijen. This is just to name a few! Thankfully, we've gotten a lot better at volcano monitoring over the past few decades, so there was almost no loss of life in the many eruptions of 2020.

The eruption plume from Lewotolo in Indonesia seen by Sentinel-2 on November 29, 2020. Credit: ESA.

It had been 8 years since the last eruption at this Indonesian volcano, but in November a new earthquake swarm began. This was quickly followed by explosions from Lewotolo (above) starting on November 27 that sent ash over 13,000 feet up. All this new activity caused almost 10,000 people to be evacuated from near the volcano and the eruptions have continued into December.

Indonesia will appear many times in this countdown, but that shouldn't be surprising as the country is full of volcanoes. One of it's most active is Sinabung and 2020 was no different. Starting in August, the volcano started producing explosions and a new dome began to grow near the summit. As this dome collapsed, pyroclastic flows roared over a mile down the slopes of the volcano.

Stromboli isn't called "The Lighthouse of the Mediterranean" for nothing. It's frequent Strombolian explosions, where lava spatters out of the summit craters, mean that the glow from those vents is persistent. These lasted all year, but in November, the volcano experienced a few larger explosions, lava flows and the formation of small cones called hornitos. A pyroclastic flow even raced out hundreds of feet over the ocean.

The eruption at Nevados de Chillán has been going for over 4 years now, but this year featured the growth of lava dome and flows in the Nicanor crater. The dome grew at over 10 cubic feet per second at times and lava that crept down the slopes after spilling over the lip of the crater. All this activity was accompanied by occasional pyroclastic flows and ash plumes that towered up to 15,000 feet.

South of Nevados del Chillán lies Villarrica, in the picturesque Lakes District. Villarrica has been off and on erupting since 2014, but had been pretty quiet until it became restless in July. For the second half of the year, the summit crater hosted frequent explosions that reached as high as 10,000 feet and a lava lake. The whole area of the summit was marked off limits to hikers who liked to peer down into the volcano as glowing volcano debris was thrown hundreds of feet from the summit.

If this was Billboard magazine, I'd say Etna (above) is #10 with a bullet. Although the Italian volcano has been restless for much of the year, its activity has been ramping up in December with some spectacular lava flows. Over much of 2020, the active craters on Etna have been producing explosions that sent ash and other volcanic debris onto some of the nearby Silician towns.

The Kamchatka Peninsula and Kurile Islands are always noisy. 2020 alone saw frequent explosive eruptions from Ebeko, Karymsky, Shiveluch, and Bezymianny that would have been headline news if they happened in the Cascades. Luckily, these Russian behemoths are pretty remote, posing the largest danger to trans-Pacific air traffic. One of the biggest, the cone of Klyuchevskoy, saw lava flows creeping down its slopes (top) for much of the year and had numerous ash plumes that reached 20,000 to 25,000 feet.

2019 ended in tragedy at Whakaari after dozens of people were killed in an eruption at the former tourist destination. By the end of 2020, the New Zealand government was levelling charges against the tour operators and the government agency that monitors volcanoes. The first half of 2020 saw the island volcano continuing to show signs of magma intruding under the volcano, including small lava flows in the crater and very high temperatures in the geothermal features (below). Some new explosions rocked the island in November, but it has since settled down.

The "Furnace Peak" in the Indian Ocean saw not one, but three separate eruptions over 2020. All three were smiliar to nature: earthquakes, followed by fissures near the Dolomieu Crater that sent lava flows down the slopes. Eruptions in April were spitting out lava at up to 1,500 cubic feet per second and nearly reached the National Road.

This year was marked by abundant lava flows and explosions at Semeru that culminated in some of the largest pyroclastic flows of the year. In late November and early December, explosions sent this glowing avalanches as far as nearly 7 miles from the volcano and buried some parts of the landscape in 50 feet of volcanic debris. The ash plumes from Semeru frequently reached 20,000 feet, all adding up to some significant hazard for the 20 million people who live within 60 miles of the volcano.

Over 1 million people live within 20 miles of Fuego. That's more than the population of Indianapolis, Columbus or Charlotte. Add to that the idea that Fuego is currently one of the most active volcanoes on the planet and you have a high potential for danger. Luckily, Fuego is closely watched by Guatemalan scientists and officials, so even though it produced thousands of explosions, lava flows, ash fall and avalanches over 2020, there were no casualties. The shockwaves from the explosions at Fuego rattled windows over 10 miles from the volcano, showing off the power of these blasts. There were also volcanic mudflows that were generated by heavy rainfall, some of which carried off entire trees and blocked roads.

This busy Pacific island volcano saw its largest explosions since it came back to life in 2013. During the middle of the summer, explosions from Nishinoshima (above) reached as high as 28,000 feet. The island has grown significantly over the past 7 years and 2020 saw the cone on the island grow by 40 meters from December 2019 to July 2020. This was helped along by lava fountains spotted in July that reached 650 feet over the island. Lava flows stretched thousands of feet to pour into the ocean, continuing to add to the island. The activity at the remote island has settled quite a bit as the year closed.

The eruptions at the picturesque Sangay were some of the largest explosion events of 2020. The combination of pyroclastic flows littering river valleys with volcanic debris and ash along with rains and snow melt led to numerous volcanic mudflows. However, it was the September 20 explosion that was the most violent. This eruption sent ash over 30,000 feet and Ecuadoran scientists who visited the volcano not long after the blast think that it deposited 50 to 120 million cubic feet of volcanic debris on the slopes of the volcano. That enough to cover 10-20 football fields in one foot deep of tephra. Sangay continues to be restless as 2020 closes out.

For the first half of 2020, Merapi looked to be wrapping up a two year active period. The growth of a lava dome at the summit of the Indonesian volcano produced copious pyroclastic flows in the early part of the year, some of which reached a mile from the volcano and accompanying explosions covered towns tens of miles from Merapi with ash. Things settled dow in June and were pretty quiet until November when the volcano started to see rapid deformation, almost 10s of centimeters per day. Combined with lots of earthquakes, Indonesian officials have started evacuated people from near the volcano because this activity is similar to what lead up to eruptions in 2006 and 2010. With over 4 million people living within 20 miles of Merapi, these signs of potential major eruption are well worth the caution.

The ash covered central island at Taal in the Philippines seen after the January 20, 2020 eruption, imaged by Sentinel-2. Credit: ESA.

It might not have lasted as long as some eruptions this year, but no eruption has as much of an impact as the early 2020 explosions at Taal. It had been over 40 years since the last eruption at the Philippine volcano that 2 million people within 20 miles. Taal has a long history of large explosive eruption as well. The eruption in 1965 was a VEI 4, putting it close to the same size as the 1980 Mount St. Helens eruption. So, when Taal began to experience a rash of earthquiakes in late 2019, Philippines scientists paid attention. On January 12, the big blast came, sending as almost 50,000 feet upwards. Ash fell on Manila (over 60 miles away), air traffic ground to a halt and at its peak, over 225,000 people had to be evacuated from the area around the volcano. Once the eruption got going, Taal featured a 500-meter-tall lava fountain that spread heavy ash across the landscape (above). Thankfully, the 2020 eruption did not match the 1965 and by April, the eruption had come to a close (for now).

There are even some places that didn't erupt that deserve mention. Unrest in the form of earthquakes, ground deformation and gas emissions told Earth scientists that stuff was happening underground at places like the Reykjanes Ridge and Grímsvötn in Iceland, Ruapehu in New Zealand and Laguna del Maule in Chile. In both cases, this restlessness might just be business as usual or signs of eruptions in the future.