Look at This: Hoard of Gold Coins Uncovered in Crusader Castle 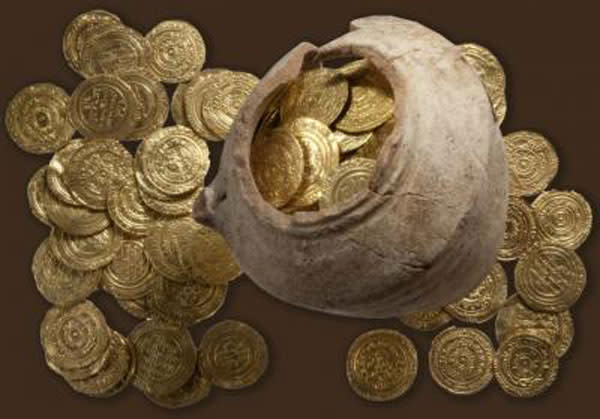 The Crusades were a time of religious conflict, when territory and castles were won with bloody battles and then quickly lost again---and with all that brouhaha, who had time to make new coins? When the Christian Knights Hospitaller

buried a jug of 108 gold coins at the castle of Apollonia, a now-deserted stronghold north of modern-day Tel Aviv, they were probably hoping to preserve their hoard from the Egyptian soldiers then besieging the fortress. Although they never returned for their money, its recent discovery is telling researchers a lot about Crusader economics and raising new questions---like why the Christians used primarily gold dinars

forged by the Fatimids

hundreds of years earlier, rather than minting their own currency, something that would have demonstrated their wealth, power, and cultural identity. Many of the coins found in the crusader castle, oddly enough, are emblazoned with the names of Muslim sultans. Image courtesy of the American Friends of Tel Aviv University