A long-toed bird preserved in amber from Myanmar is the first of its kind. (Credit: Lida Xing)

Smaller than a sparrow, a bird that lived 99 million years ago in what’s now Southeast Asia had legs unlike any other avian. The bird’s hindlimb features one toe longer than its entire lower leg bone.

Lucky for paleontologists, a piece of amber has preserved the animal’s odd anatomy.

Found in Burmese amber and identified as new species, Elektorornis chenguangi is known only from one hindlimb. But what a limb!

(If you’re wondering about your tarsometatarsus, don’t. Only birds and some non-avian dinosaurs have the bone. It’s a fusion of other hindlimb bones and in mammals is analogous to the foot and ankle.) 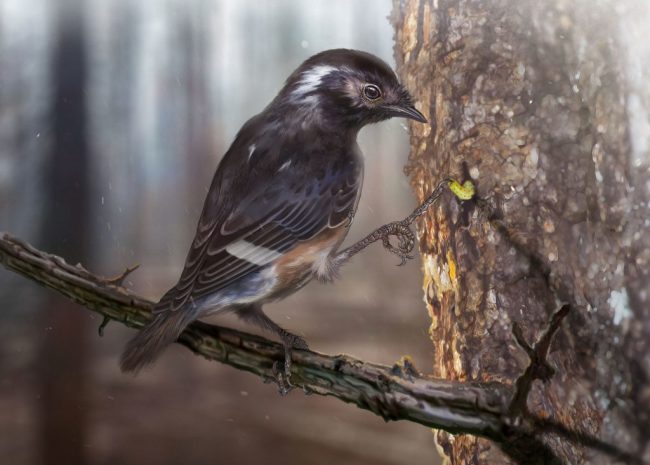 The exact function of the hyper-elongated third toe remains unclear, in part because there is no living bird with a similar adaptation that could serve as an analog.

One hypothesis: The bird lived in a forest environment, so the toe may have been handy for grasping branches. (Though, given the number of forest birds that get by without a super long toe, that explanation is, ahem, hard to hang onto.)

Researchers consider tufts of of filaments present on the digits, most prominently on that freaky third toe, to be a better clue to the toe’s purpose. The filaments may have provided tactile sensation, allowing the animal to probe its environment in search of food.

The researchers note that the hindlimb underwent “significant decay” before the amber preserved it, including skin sloughed off the bone.

The study appears today in Current Biology. It’s the most recent fascinating find to emerge from amber deposits in Myanmar. Past discoveries included a feathered dinosaur tail, a rare beach scene frozen in time and the only baby snake in the fossil record.

Despite the often unique and significant nature of the finds, many researchers have raised ethical concerns about the collection and trade of Burmese amber.

Miners harvest pieces of the fossilized tree resin without preserving the geological context of the finds, which is crucial for dating the material and recreating the environment of the plants and animals it preserved.

A network of middlemen sell the pieces of amber to the highest bidder, and some finds may disappear into private collections. The profits from these sales may be used to support local and regional conflicts.