Lonesome George, the World's Rarest Tortoise, Isn't Ready to Be a Dad 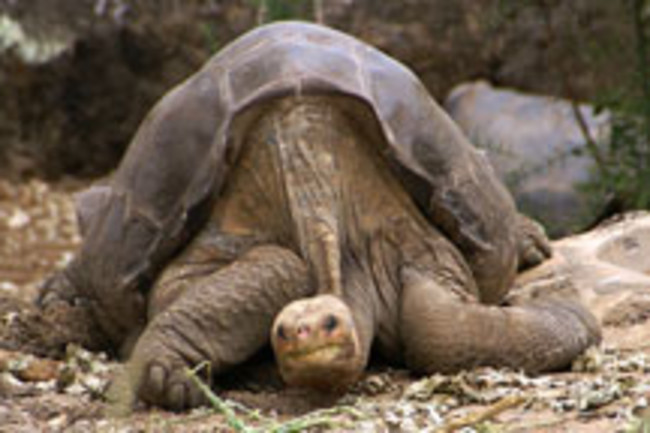 Poor Lonesome George: Although he may have found a mate, researchers say he is still being denied the joys of fatherhood. George is thought to be the last representative of a tortoise subspecies from the Galapagos Island of Pinta, and researchers rejoiced this summer when he appeared to father a batch of eggs. But earlier this week a spokesperson for the Galapagos National Park announced that 80 percent of the eggs do not appear to be viable. The excitement began this summer when two female tortoises exhibited surprising behavior.

The females, who have shared George's enclosure at the Charles Darwin Research Station on the central island of Santa Cruz for almost 20 years, are of a different but closely related species. After decades of reproductive reticence, they stunned scientists during the summer by building nests and filling them with eggs for the first time [Nature News].

Researchers quickly removed the 16 eggs from the nests and installed them in an artificial incubator, although three of those eggs were thought to have already deteriorated. The remaining 13 eggs were expected to hatch this week, but a recent inspection depressed researchers' hopes. Most of the eggs were found to have lost a great deal of weight through water loss, which indicates that no embryos have been developing, and several eggs have fungus growing on their shells, which may signal that the material inside is rotting. However, a slim chance of baby tortoises remains.

Scientists said 20 percent of the remaining eggs could still produce offspring.... "We will leave the eggs in the incubators and try to find answers," said Washington Tapia, a park official [Reuters].

Researchers don't yet know why the eggs failed to develop, and say it's possible that George is infertile. Reproduction has never been high on George's list of priorities, and researchers have spent decades trying to coax the reluctant tortoise into dallying with the ladies.

After trying almost everything from artificial insemination to having George watch younger males mate, his keepers had nearly lost hope. At 90 years old George is in his sexual prime and his low libido even raised tabloid-like rumors the 198 pounds (90 kilograms) creature preferred other males [Reuters].