A plant's clever engineering allows it to live in harsh, rocky habitats. 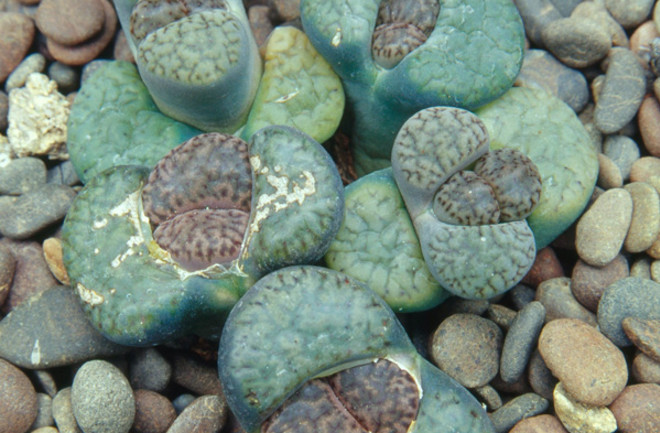 The hardy plants known as living stones have a variety of special adaptations allowing them to thrive in challenging climates. | Geoffrey Bryant/Science Source

Life isn’t easy when you set down roots in a harsh environment. Among the plants that make a go of it are Lithops, more commonly known as living stones, a type of succulent that thrives in the superhot, superdry conditions of southern Africa. How do they survive? A study by University of Cambridge botanist Matthew Davey and colleagues suggests it’s the plant’s clever engineering.

Living stones, named for their rocky appearance, bury the bulk of their leaves underground, taking a dive for shade. They use specialized structures to channel light to the buried parts. The aboveground plant cells have adapted to the bright, dry conditions with a sunscreen-like pigment and a special blend of chlorophyll that allow them to photosynthesize without frying to a crisp. The underground cells are cone-shaped and contain embedded crystals, which likely distribute the light that reaches them, maximizing the plant’s potential to turn that light into energy.

This is the first time scientists have found both sun- and shade-tolerant adaptations within a single plant. In addition to showing how plants tolerate extreme conditions, which we’re likely to see more of as the climate changes, the discovery also holds promise for practical applications involving novel light-reflecting surfaces. Next up, Davey’s team will look at why and how the light changes as it travels underground.

[This article originally appeared in print as "Secret Lives of Living Stones."]