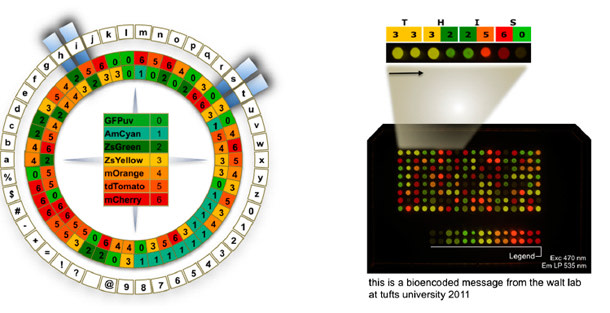 I've got a new piece in Nature News about a cool new technique that uses glowing bacteria to send encrypted messages. There's lots to like about this: they call the technique SPAM, they reference Mission Impossible in the paper, and the whole thing is actually funded by DARPA (the US Defense Advanced Research Projects Agency). But most importantly of all, it allowed me to get Godwin's Law into Nature (3rd paragraph from bottom). Thanks Meredith L Patterson! From the piece (do read the full one):

For millennia, people have written secret messages in invisible ink, which could only be read under certain lights or after developing with certain chemicals. Now, scientists have come up with a way of encoding messages in the colours of glowing bacteria. The technique, dubbed steganography by printed arrays of microbes (SPAM), creates messages that can be sent through the post, unlocked with antibiotics and deciphered using simple equipment. Manuel Palacios, a chemist at Tufts University in Medford Massachusetts, [encrypted] messages using seven strains of Escherichia coli bacteria. Each one was engineered to produce a different fluorescent protein, which glows in a different colour under the right light. Colonies of bacteria are grown in rows of paired spots, every combination of two colours corresponding to a different letter, digit or symbol. For example, two yellow spots signify a 't', whereas an orange and a green spot denote a 'd'. Once grown, the pattern of colonies is imprinted onto a nitrocellulose sheet, which is posted in an envelope. The recipient can use the sheet to regrow the bacteria in the same pattern and decipher the message. 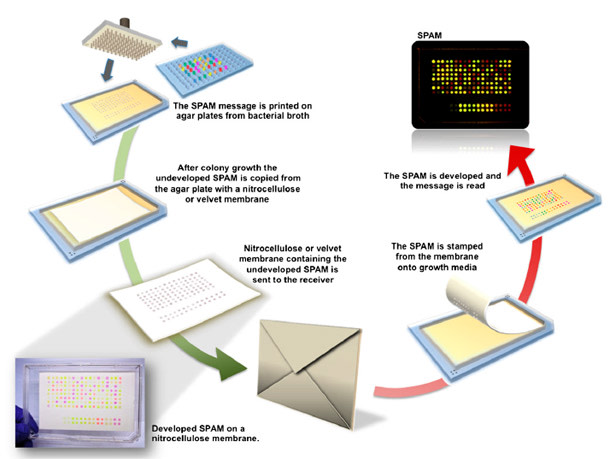