Little Spiders Have Huge Brains That Spill Into Their Legs 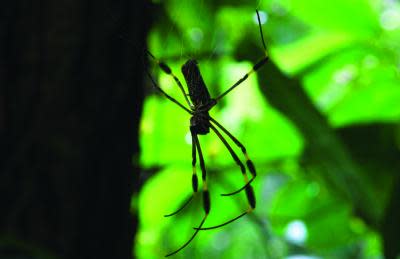 Tiny spiders have enormous brains, so big the neurons spill into their legs, causing the spiderlings of some species to bulge like overstuffed brain-bags (although the bump fades with adulthood). In some small arachnids this extended brain---really just a tangled mass of nerves---takes up almost 80 percent of the animal's body cavity, and about a quarter the mass of its legs. Talk about thinking on your feet. The percentage of space devoted to cognition dwarfs that of humans, whose brains take up two to three percent of the body. It also trumps the setup of minute beetles and ants, whose brains make up only 15 percent of their weight. These insights come from a study published recently in the journal Arthropod Structure and Development, which set out to explain why small spiders are basically as adept as large spiders when it comes to completing relatively complex tasks like building webs. These massive distributed brains, it turns out, may be the answer. The team's findings basically conform to Haller's rule, which holds that the brains of smaller animals are larger relative to their body size than those of big animals. The study also shows just how close tiny spiders come to the inevitable limitations; nerve fibers can only get so thin, for example, before they cease being able to shuttle about ions that relay nerve signals. Brains that take up a greater percentage of body space also demand relatively more energy, which suggests that much of the energy netted by the tiniest of spiders goes straight to their head. After reading this paper, I no longer see spiders, but walking brains. Reference: Rosannette Quesada et al. The allometry of CNS size and consequences of miniaturization in orb-weaving and cleptoparasitic spiders. Arthropod Structure and Development. Pages 521-529. 2011. DOI: 10.1016/j.asd.2011.07.002