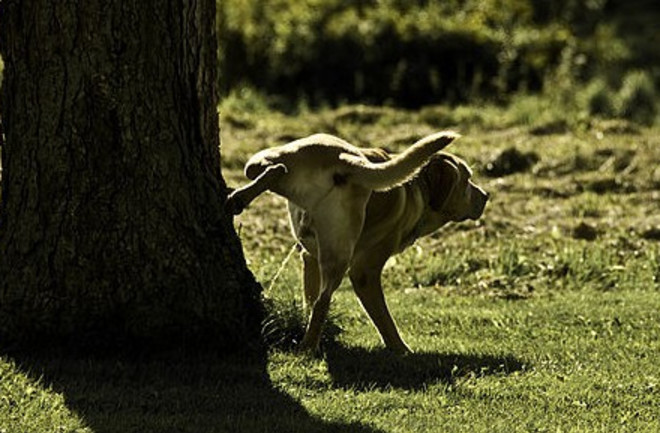 Scientists have discovered smaller dogs aim higher, most likely to appear larger. Photo Credit: Mike Finkelstein You know how people say you should aim high? Well, small male dogs have taken that advice to heart. A new study has found that they lift their legs higher when urinating than larger dogs, apparently attempting to appear bigger than they are.  Dog walkers know that walking a male dog is an exercise in patience, as they want to pause to sniff, lift, and dribble a little urine on what seems every object they walk past. But it's not the poor dog's fault; he's just trying to find out who's in town and let everyone else know he's around. Those urine marks are a scent signal that dogs use to communicate with one another. They're basically renal post-it notes for other dogs to read later. And while it's true that male and female dogs will use their urine to mark territory and signal their presence to other dogs, males mark far more frequently. We don't know exactly what information dogs glean from these uric puddles, but presumably, the unique mix of compounds tells other dogs things like the urinator's health and breeding status. Since it's unlikely dogs have any control over exactly what's in their pee, it's thought that these scent marks are an honest signal which tells other dogs reliable intel. Except, there is one thing that dogs can control: where they place their pee. https://www.youtube.com/watch?v=jsq_vNIFCvE Researchers from Cornell University took small and large dogs on short walks and videotaped them as they made their yellow marks, which were then documented and measured. They also analyzed the tapes later, determining the angles to which the dogs' lifted their legs. They found that little dogs aimed higher, placing their urine further from the ground for their body size than big ones. And that, the scientists think, might make the marks seem like they're made by larger dogs. Basically, the little pups are lying about their size. "Assuming body size is a proxy for competitive ability, small adult male dogs may place urine marks higher, relative to their own body size, than larger adult male dogs to exaggerate their competitive ability," the authors explained. Dogs are certainly capable of deception, so it's definitely possible the small pups are being dishonest. But, the study didn't account for over-marking—the behavior of peeing on top of another's —which is thought to be an important part of signaling status. If there was already dog pee on the objects the little dogs were approaching, it's possible they simply lifted their legs more to mark the same spot. So it would be interesting to see how differently sized dogs react to urine-free areas or manipulated mark heights. The angle of leg lift could also have nothing to do with the urine signal, and everything to do with the dog itself. Different breeds could simply have different biophysical abilities when it comes to joint rotation and muscular lifting power. So it could just be easier or more comfortable for the small dogs to raise their paws. Still, the research has raised intriguing questions about the functions of scent marking in dogs and what information is relayed through these sprays of pee. Future studies could shed a lot of light on the lingering mysteries. And while such research is unlikely to win a Nobel Prize, it could certainly put them in the running for an Ig Nobel. Citation: McGuire et al. 2018. Urine marking in male domestic dogs: honest or dishonest? Journal of Zoology, Early View. DOI:10.1111/jzo.12603