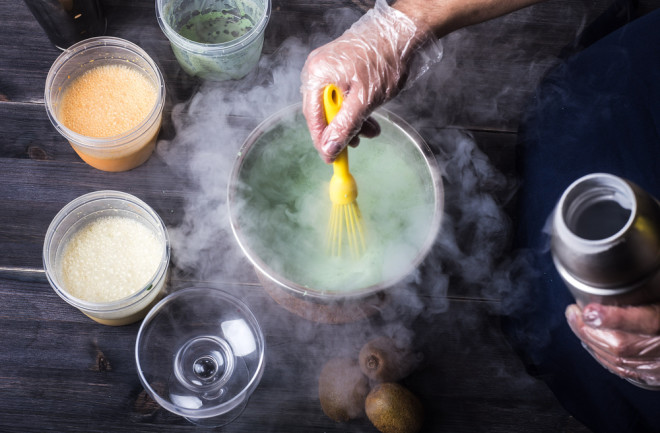 Creamistry – n.  the science of creating ice cream using Liquid Nitrogen and not to be confused with the ice cream shop of the same name [4]. Ice cream does not seem complicated to make, but contrary to popular belief it’s not as simple as just freezing cream and sugar. Rather, this complex process requires slowly freezing cream to allow small ice crystals to form, creating a creamy texture. The process can be long and arduous, but there’s a secret ingredient for much speedier ice cream: liquid nitrogen.

Liquid nitrogen is a chemical that boils at a very low temperature, -312 F to be precise. This means that at room temperature, nitrogen is a gas, while at very cold temperatures below -312F, it’s a liquid. In its liquid form, nitrogen provides a handy way to make ice cream fast: it can be poured over the ice cream base mixture—which is mostly heavy cream and sugar— to reduce the temperature of your ice cream mixture very quickly.

The drop-in temperature reduces the motion of all the molecules and water molecules begin to form small seed crystals and nucleation sites. As you stir, the mechanical energy breaks up the crystals into tiny pieces.  By contrast, if you place your ice cream mixture into the freezer, there are no external forces to interrupt the growth of the ice crystals, and the resultant ice cream will feel grainy and coarse.

We mention crystals a lot, but in the ultimate ice cream, we never want to feel the texture of crystals in our mouths; ideally, they are much smaller than the particle size that our taste buds can detect: about 20 μm [1]. If the water crystals are too large they can have an adverse effect on the texture, resulting in an ‘icy’ texture that is not so smooth and creamy.

The formation of ice crystals starts with nucleation sites or seed crystals that are frozen in the solution of cream and sugar. The more nucleation sites, the more ice crystals. If frozen too quickly, the initial nucleation sites may develop into much larger crystals and have adverse effects on the overall ice cream texture [4]. But with rapid stirring, large ice crystals are prevented from forming and you get a creamy and smooth texture that can even rival the smoothness of store bought ice cream.

Using liquid nitrogen as a freezing agent isn’t new; it’s used in other industries to preserve samples of cells and tissues, as well as to flash freeze food products for preservation. It’s also been used in a plethora of restaurants and dishes in the recent age of modernist cuisine. For example, creating powder from flash frozen herbs with fresh picked herbs, or even creating a foie gras flower from frozen duck liver.

Additionally, cryocooking — primarily cryo ‘frying’ — is utilized as a technique to freeze a food product and allow it to fry without becoming overcooked. For example, a burger patty may be flash frozen with liquid nitrogen, and deep fried to allow for a perfectly medium rare burger patty.  By contrast, if the burger was pre-frozen, it could slowly develop ice crystals in the freezer, resulting in an undesirable texture.

Overall, liquid nitrogen provides a fun and unique method to develop dishes that have unique textures. Cold and refreshing new dishes have inundated the food world, everything from frozen caviar pearls to frozen cereal balls called “Dragon Breath”. Check out your local Creamistry ice cream shop for a quick display of this science in action!